A letter of credit (LC) is a financial document that facilitates international as well as domestic trade. It substitutes the bank credit for the credit of the customer. There are two basic types of letters of credit – commercial and standby. The commercial LC is the primary mechanism of payment while the standby LC is a secondary mechanism.

Definition of Letter of Credit

A letter of credit is a document from a bank or a financial institution on the buyer’s behalf that assures the payment to the seller. The bank needs to have certain documents in possession before it issues the LC. This letter is as good as a guarantee to the seller that the payment will be cleared even if the buyer fails to do so. The risk of non-payment shifts from the seller to the bank. Generally, the entire process also involves another bank that works as an advisor to the seller. The issuing bank authorizes the advisory bank to pay the seller.

The commercial LC has been used for ages to facilitate the process of payment in domestic as well as an international trade like import and export letter of credit. In fact, its usage will increase with the development of the global economy. All the international letters of credit are governed by the regulatory body of the International Chamber of Commerce under the Uniform Customs and Practice for Documentary Credits.

Features of Letter of Credit

The LC is usually considered as a negotiable instrument and can be passed freely as money among various parties. It obligates the issuing bank to pay the money not only to the beneficiary but also to any other bank nominated by him. However, the LC is considered as negotiable only when it includes an unconditional promise of payment on demand or at a particular time.

The beneficiary of the letter of the credit can transfer or assign the LC as many times as possible. The LC will remain effective.

The letter of credit demands payment through two features: sight or time. A sight draft is paid when the LC is presented and the time draft is paid after a certain duration of time. The bank will review the LC to be sure that it is valid in both cases. 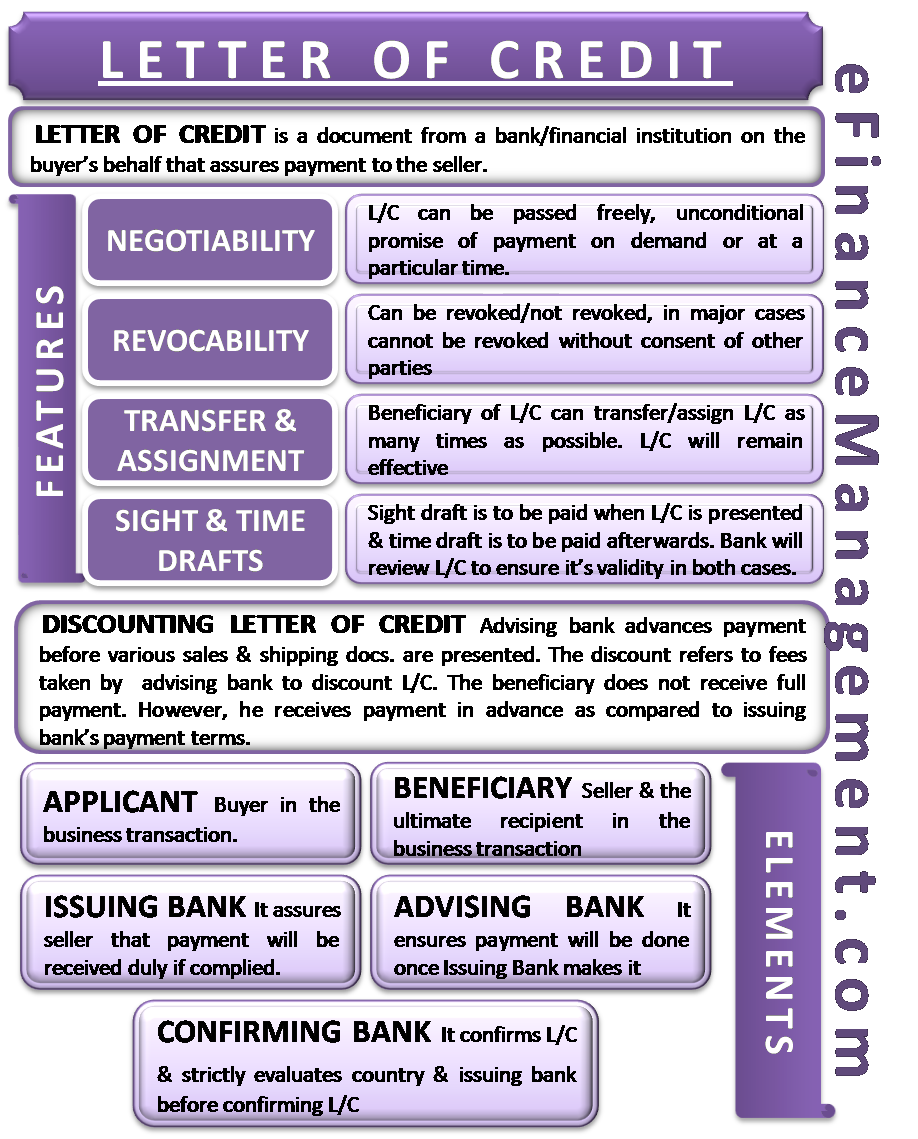 Elements of a Letter of a Credit

The LC is understood better if all the following elements or terms of the letter of credit are known:

The buyer in the business transaction.

The seller of the goods and services and the ultimate recipient of payment in the business transaction. The beneficiary needs to provide all the required documents for the letter of credit to be processed.

Discounting of Letter of Credit

A beneficiary can get the letter of credit discounted to be paid earlier. The advising bank advances the payment before the various sales and shipping documents are presented. The discount refers to the fees taken by the advising bank to discount the LC. The beneficiary does not receive the full payment. However, he receives the payment well in advance as compared to the issuing bank’s payment terms.

4 thoughts on “Letter of Credit”