The debenture classification is based on tenure, redemption, mode of redemption, convertibility, security, transferability, type of interest rate, coupon rate, etc. Ultimately, a debenture is not like a standard product configured strictly. It is an agreement between the corporation and the debenture holders that decides the characteristics of a debenture. Following are some examples of agreement templates for ready reference and quick drafting.

Following are the various types of debentures vis-a-vis their basis of classification.

Redeemable debentures carry a specific date of redemption on the certificate. The company is legally bound to repay the principal amount to the debenture holders on that date. There are various ways to redeem a debenture.

Irredeemable debentures, also known as perpetual debentures, do not carry any redemption date. This means that there is no specific time of redemption of these debentures. They are redeemed either on the company’s liquidation or as per the terms of the issue when the company chooses to pay them off to reduce their liability by issuing due notice to the debenture holders beforehand.

It is essential to prepare an agreement that clearly expresses all the terms and conditions.

Debentures can be secured, and they may be unsecured in nature. A secured debenture is secured by the charge on some asset or set of assets known as a secured orMortgaged Debentures mortgage debenture. Another, when it is issued solely on the issuer’s credibility, is known as the naked or unsecured debenture. A trustee is appointed to hold the secured asset, which is obvious as the title cannot be assigned to each debenture holder.

In the case of registered debentures, the name, address, and other holding details are registered with the issuing company. Whenever the holder transfers such debenture, it has to be informed to the issuing company for updating in its records. Otherwise, the interest and principal will go to the previous holder because the company will pay the registered one. Whereas the unregistered is commonly known as bearer debenture and can be transferred by mere delivery to the new holder. They are as good as currency notes due to their easy transferability. The interest and principal are paid to the person who produces the coupons attached to the debenture certificate and the certificate. 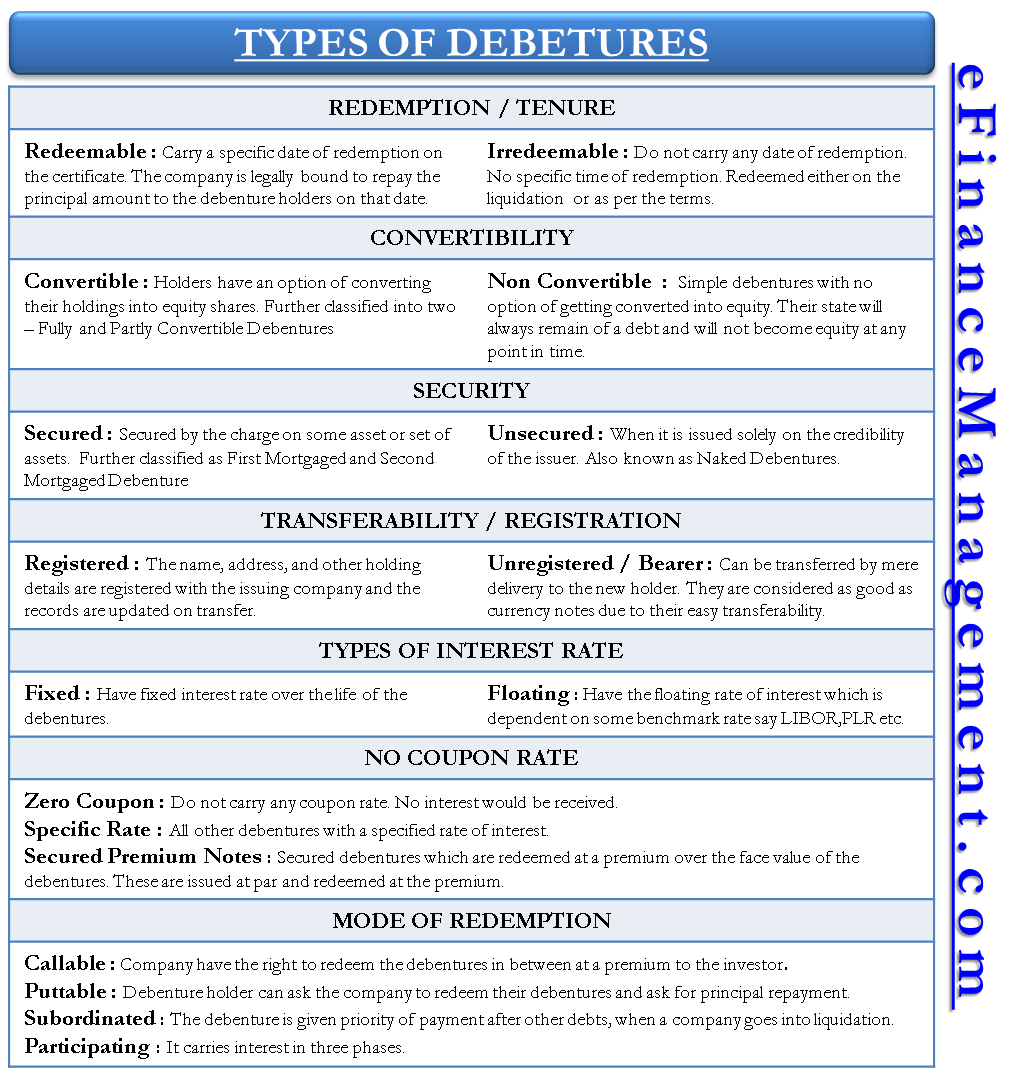 Zero-coupon debentures do not carry any coupon rate, or we can say that there is a zero-coupon rate. The debenture holder will not get any interest in these types of debentures. Need not get surprised; for compensating against no interest, companies issue them at a discounted price that is less than their face value. The implicit interest or benefit is the difference between the issue price and the face value of that debenture. These debentures are to be redeemed at face value. The other term for these is ‘Deep Discount Bonds.’ All other debentures with a specified interest rate are specific rate debentures that are just like a normal debenture.

Whenever a corporation is borrowing for the long term by issuing fixed rate debentures, it risks a decrease in the rate of interest in the market. Suppose a company is issuing 20 years debentures offering a rate of interest of 7%. After 5 years, similar debentures can be issued at a market offering rate of interest of 4%; then, for a corporation, there will be a comparatively higher cost than the existing debenture. So, the corporation may issue long-term debenture with a callable feature in which it will have a right to redeem the debenture in between. However, in this case, usually, the company will offer a premium to an investor in case of early redemption.

In the case of puttable debentures, the option lies with the investors for early redemption. Generally, a company in bad need of money will issue a puttable debenture. In this case, debenture holders can ask the company to redeem their debenture and ask for principal repayment. The company can issue this type of security to avoid a hostile takeover.

In these types of debentures, the debentures prioritize payment after other debts when a company goes into liquidation. They are also known as subordinated loans, subordinated bonds, subordinated debt, or junior debt. Usually, they will be offered a higher return as they undertake more risk.

Quiz on Types of Debentures

10 thoughts on “Types of Debentures”