A debenture is a way of borrowing money at a fixed or floating rate of interest without assigning any assets of the company as security. Various features of a debenture are the requirement of the trust indenture, payment of coupon interest rate, tax benefit, certain date of maturity, various redemption choices, security, convertibility into equity, mandatory credit rating, and claims on profits and assets in case of default.

A debenture is a debt instrument used by companies to raise money for medium to long-term at a specified interest rate. It consists of a written contract specifying the repayment of the principal and the interest payment at a fixed rate. Generally, a debenture is not secured by any collateral and is only backed by the issuer’s reputation.

A debenture is a document that looks like a certificate stating the indebtedness of the company that has issued it, contains the name of the owner of the certificate who has invested in it, and mentions the terms and conditions wherein the coupon rate (interest rate) and the par value of each debenture are also shown.

Read more about Debenture and its Basic Characteristics.

To understand a debenture clearly, it is necessary to understand its features properly. Debentures have certain peculiar features.

It is an agreement that has to be entered into by the ‘Issuing Company’ and the ‘Trust,’ which is involved in taking care of the interest of the general investors. For issuing a debenture, it is something mandatory. Normally the trustee is a bank or a financial institution appointed by a debenture trust deed. 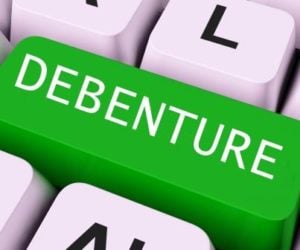 A most important element from the company’s point of view is that the interest paid is a tax-deductible expense. Effectively, the company will get the tax benefit because the extent of interest paid will reduce the taxable income. Due to this, the effective cost of borrowing gets reduced. Please note that the said benefit is there if the company makes profits and pays taxes.

In essence, a debenture is a debt that needs to be repaid by a company. There are three choices by which a company may opt to redeem the debentures. One is to make payment on the date of maturity, which is the simplest of all and is called redemption out of capital. The second way is to create a debenture redemption reserve wherein the company transfers some funds every year from the divisible profits, and this method is known as redemption out of profits. There is another innovative way of redeeming the debentures, which is in the form of the call and put option. A call option allows the company to buy back its debentures on some agreed terms on or before maturity. In the put option, the choice of redemption is given to the investor.

Certain types of debentures are issued with the option of conversion into equity. The ratio of conversion and the time period after which conversion will take place is mentioned in the debenture agreement. Debentures may be fully or partly convertible in nature.

Normally, an investor would not check the credibility and the risk involved with the debentures. Credit rating agencies are given this task, and they rate the debentures and the overall company. Involving a rating agency is normally compulsory for the issuing company in every country.

Charge on Assets and Profits in case of Default

The debenture holders may have claims over the profits and assets of the company in case the company has defaulted in the payment of either the interest or the capital repayment.

A debenture is the primary source of long-term capital for companies to fulfill their financial requirements. Bank loans, bonds, and equity shares are other instruments to raise long-term capital. Though all these instruments are used widely in different combinations, they differ from each other in many ways. The article clarifies how debenture is different from bank loans, equity shares, and bonds, respectively.

Difference between Debenture vs. Bank Loan

Both debenture and bank loans are ways to finance long-term debt. However, there are differences between the two:

In debenture, the public lends its money to the company in return for a certificate promising a fixed interest rate. In loans, the lending institutions are banks and other financial institutions.

Debentures do not require any physical asset or collateral from the firm. In contrast, banks and other institutions require collateral for the loans unless it is a small amount of unsecured loans.

Debentures can be transferred from one person to another. However, bank loans are non-transferable.

Difference between Debenture vs. Equity Shares

Generally, debentures and equity shares are the two choices sources of long-term capital for the company. These instruments, however, have a lot of differences.

Debentures are repayable upon the completion of the issue period. On the other hand, shares are not returned during the tenure of the company.

In case the company is liquidated, the debenture holders will get the money back prior to the shareholders.

Debenture holders are paid interest on the debenture, and it is not affected by any profit or loss in the company. Shareholders, on the other hand, are paid dividends on the shares from the company’s profits. It is only when the company earns a profit; that directors may decide to declare dividends out of the same.

Shares are riskier and hence, maybe more rewarding than the debentures at times. While the chance of going on the downside for returns is also high.

The Rate of Discount on Issue

Both the instruments can be issued at a discount. Debentures have no limit to the discount rate, whereas equity shares have a stipulation that limits the discount to 10% in most countries.

There is no security of any charge on the shares. Debentures, on the other hand, are secured and bear a floating or a fixed charge over the company’s assets.

A company’s assets can be mortgaged in favor of holders of debentures to issue mortgage debentures. However, there is no option of mortgaging assets in favor of equity shareholders.

Difference between Debenture vs. Bond

The terms bond and debentures are used interchangeably. But, there are some thin line differences between the two. The very basic difference is that bonds are secured, but debentures are not. So, the bonds will bear less risk and therefore have less interest rates too. On the other hand, debentures are entirely dependent on the borrower’s default risk; hence, the interest rates are high. For a detailed understanding, refer. Bond Vs. Debenture.

A debenture is an important source of raising money for the long-term financial needs of the company. Though it raises a considerable proportion of the capital, it is not the only source. Companies also use bank loans, equity shares, and bonds to raise money. A company should understand the differences between the various sources of long-term debt and decide on the most suitable one after a complete consideration.

Read about the Benefits and Disadvantages of Debentures.

4 thoughts on “How is Debenture different from Bank Loans, Equity Shares and Bond?”