Company debenture is one of the important sources of finance for large companies, in addition to equity stocks, bank loans, and bonds. Companies need to follow certain procedures for issue of debentures to raise money. There are several ways of issuing a debenture viz. at a par, premium or discount and even for consideration other than cash.

The procedure of issuing debentures by a company is similar to the one followed while issuing equity stocks. The company starts by releasing a prospectus declaring the debenture issuance. The interested investors, then, apply for the same. The company may need the entire amount while applying for the debentures or may ask for installments to be paid while submitting the application, on allotment of debentures or on various calls by the company. The company can issue debentures at a par, at a premium or at a discount as explained below.

Different Ways for Issuing of Debenture

Issue of Debenture at Par

When the issue price of the debenture is equal to its face value, the debenture is said to be issued at par. When a debenture is issued at par, the long-term borrowings in the liabilities section of the balance sheet equals the cash in the assets side of the balance sheet. Thus, no further adjustment is required to balance the assets and the liabilities of the company. The company can collect the whole amount in one installment i.e on an application or in two installments i.e. on an application and subsequent allotment. However, there might be a scenario in which money is collected in more than two installments i.e. on an application, on an allotment and at various calls by the company.

Issue of Debenture at Discount

The debenture is said to be issued at a discount when the issue price is below its nominal value. Let us take an example – a Rs. 100 debenture is issued at Rs. 90, then Rs.10 is the discount amount. In such a scenario, the liabilities and the assets sides of the balance sheet do not match. Thus, the discount on debentures’ issuance is noted as a capital loss and is charged to ‘Securities Premium Account’ and is reflected as an asset. The discount can be written off later.

Issue of Debenture at Premium

When the price of the debenture is more than its nominal value, it is said to be issued at a premium. For example, a Rs. 100 debenture is issued for Rs.105 and Rs.5 is the premium amount. Again, assets and liabilities do not match in such a situation. Therefore, the premium amount is credited to Securities Premium Account and is reflected under ‘Reserves and Surpluses’ on the liabilities side of the balance sheet. 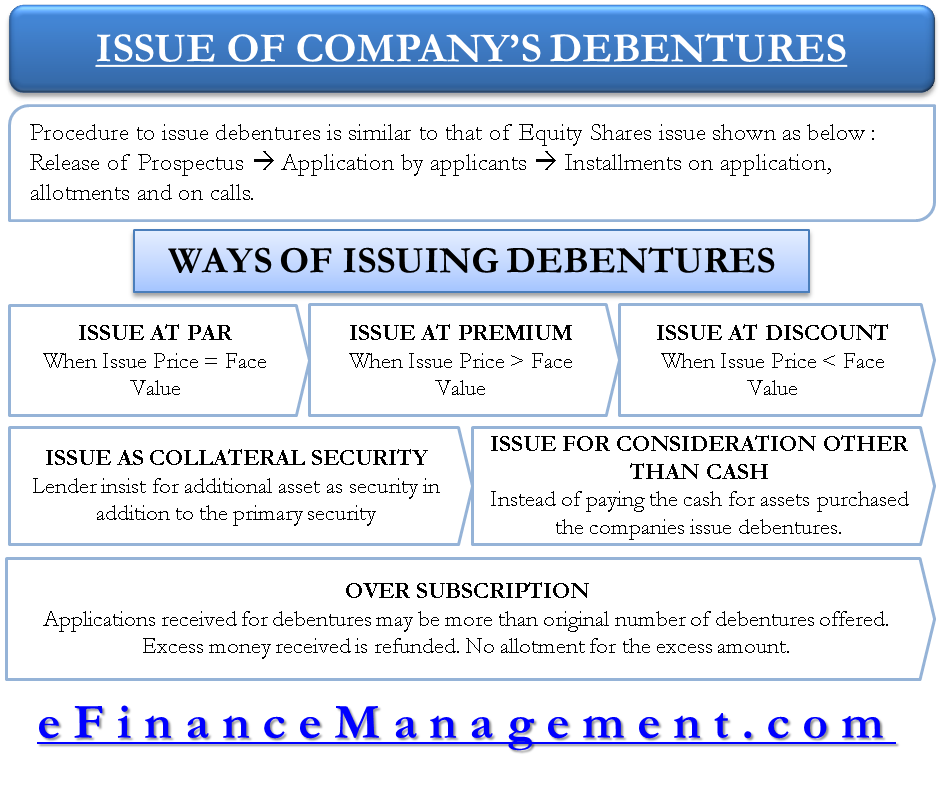 The issue of Debenture as Collateral

Issue of Debenture for Consideration Other Than Cash

Debentures can also be issued for consideration other than cash. Generally, companies follow this route with their vendors. So, instead of paying the cash for the assets purchased from the vendor, the companies issue debentures for consideration other than cash. In this case, also, the debentures can be issued at par, premium or discount and are accounted for in a similar fashion.

The company invites investors to subscribe to its debenture issue. However, it may happen that the applications received for the debentures may be more than the original number of debentures offered. This scenario is referred to as oversubscription. In the case of over-subscription, a company cannot allocate more debentures than it had originally planned to issue. So, the company refunds the money to the applicants to whom debentures are not allotted. However, the excess money received from applicants who are allocated debentures are not refunded. The same money is used towards allotment adjustment and the subsequent calls to be made.

Conclusion: Several companies decide to issue debentures to raise capital, along with the other sources of long-term finance. The companies need to follow the regulations and the procedure associated with the issuance of debentures. Further, they also need to account debentures issued at par, premium or discount accordingly.1,2

Last updated on : October 2nd, 2019
What’s your view on this? Share it in comments below.
Pin It Tweet