If a shareholder holds 100 shares out of a total 100,000 shares of the stock of a company, and the company announces a 2:1 bonus issue, the shareholder will get 200 additional shares and his holding will become 300 shares. The company’s outstanding shares will also increase by 200,000 making the total outstanding shares as 300,000. The shareholder’s stake in the company before the bonus issue was 100 / 100,000 = 0.1%, and after the bonus issue is 300 / 300,000 = 0.1%. So, the percentage holding of the existing shareholders remains the same. The date when bonus issue becomes effective is called record date. 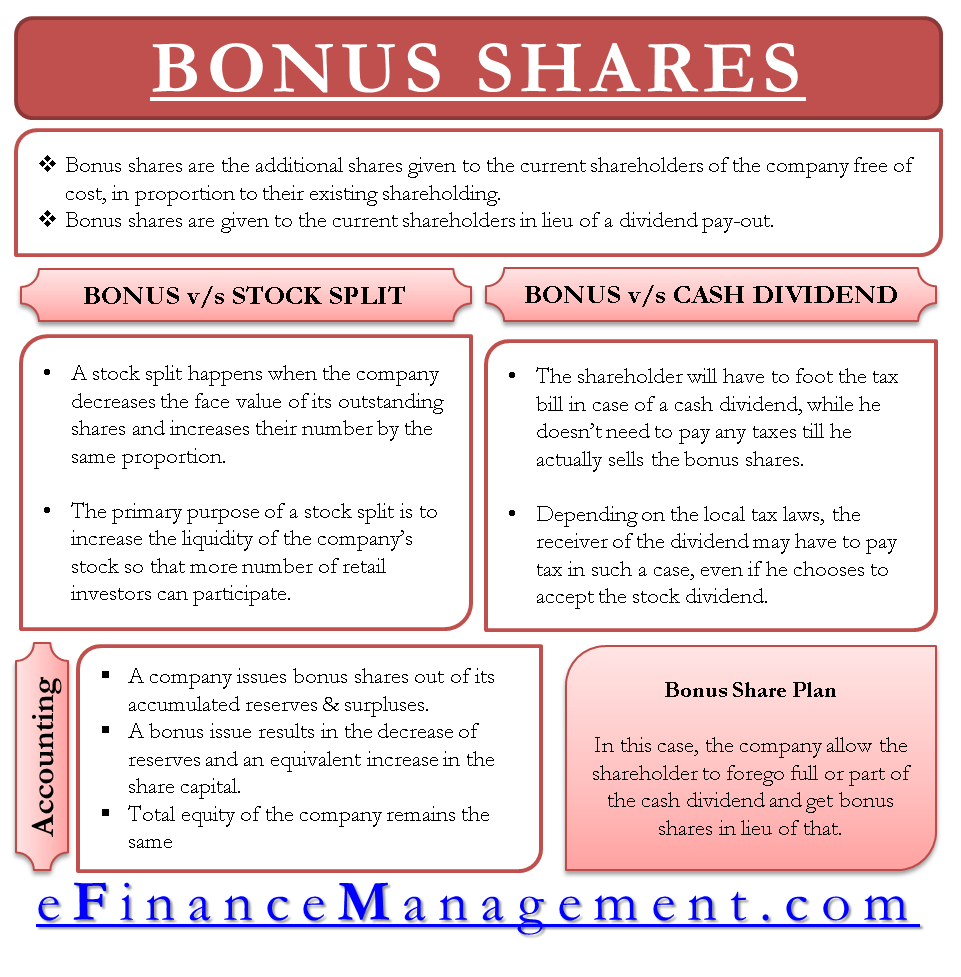 A company can also reward its shareholders by the means of a cash dividend. There is a transfer of wealth from the company to the shareholder and the share price drops by an amount equal to the dividend paid out. The shareholder will have to foot the tax bill in case of a cash dividend, while he doesn’t need to pay any taxes till he actually sells the bonus shares. There is an exception to this when the company gives the option of a cash or share-based dividend. Depending on the local tax laws, the receiver of the dividend may have to pay tax in such a case, even if he chooses to accept the stock dividend.

Some companies have a Bonus Share Plan where they allow the shareholder to forego full or part of the cash dividend and get bonus shares in lieu of that. Such bonus shares are usually issued at a discount to the prevailing trading price. This plan may be beneficial to those shareholders who want to accumulate the company’s shares instead of getting cash dividend.

A company issues bonus shares out of its reserves & surpluses accumulated over its life. A bonus issue results in the decrease of reserves and an equivalent increase in the share capital of the company. Total equity of the company remains the same as a bonus issue is just a reclassification of the equity capital.

Example: A company XYZ has the balance sheet as below at the end of 2016:

How will the balance sheet look like after the company issues bonus shares in the ratio 1:1?

Note that there is no change in the Assets, Liabilities of Total Equity of the Company.

There are various advantages and disadvantages of bonus share like dividend, capital gain, limited liability, high risk, fluctuation in the market, etc.1–6