A normal bond can be issued with embedded options. One such bond is a callable bond. It is like a normal bond but with an embedded call option which gives the issuer a right to recall the bond before its actual maturity is over. So, basically, a callable bond has two lives – one is its normal maturity, and the other is when the issuer calls it. Since callable bonds give additional benefits to an issuer, he has to pay a premium to get this benefit. That’s why a callable bond has a higher coupon rate than a normal bond. In addition, the issuer may pay a premium to the bond’s par value if it is called before maturity. All these conditions are explicitly mentioned in the bond indenture beforehand.

One important consideration to note here is the conditions surrounding an early redemption of a callable bond. If an issuer has issued long-term bonds during a specific interest rate environment, and if the interest rates fall in the future, it makes sense for the issuer to re-issue debt at those lower rates. So, he will prefer to retire the older high coupon debt and issue new debt at lower rates. This is the benefit that having a call option on the bond gives the issuer, the specific time periods during which the bonds can be recalled may also be specified in the bond indenture. 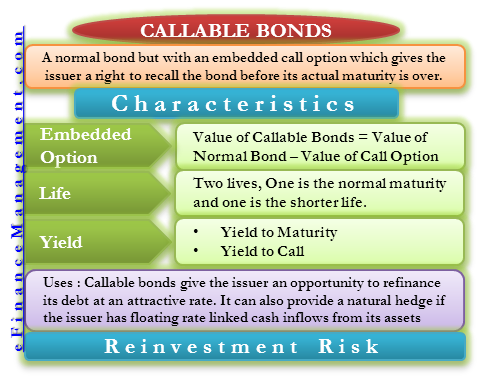 The following characteristics can describe a callable bond:

A callable bond has two lives. One is the normal maturity, and the other is the shorter life it experiences upon exercising the call option.

As with two lives, a callable bond also has two yields

This is the yield of the bond if it is held till maturity. It is the same as the yield of a normal bond with a similar coupon and maturity. (Read more at Yield to Maturity)

This is the yield if the bond is called before maturity. It can be estimated if we know the callable windows during the bond’s life and the value at which it will be called. (Read more at Yield to Call)

Callable bonds give the issuer an opportunity to refinance its debt at an attractive rate. It can also provide a natural hedge if the issuer has floating rate-linked cash inflows from its assets. For the investors, it gives them an opportunity to earn higher than the normal coupon rate for at least the bond’s life. They also have a new asset class to diversify their portfolio.

Also refer to Bonds and their Types to get a quick insight of various different types of bonds.