Home
Sources of Finance
Advantages and Disadvantages of Capital Lease

There are basically four conditions that make a capital lease. The conditions are –

Advantages and Disadvantages of Capital Lease for the Lessee

Advantages of Capital Lease for the Lessee

A capital lease is embedded with benefits that the lessee might get had he purchased the leased asset. The lessee can use the asset for more than 75% of its life. Furthermore, at the end of the term, the lessee gets an option to purchase the asset at a bargain price. In a nutshell, most of the ownership benefits of the lease go to the lessee.

As the capital lease involves a transfer of ownership rights to the lessee, the lessee can show the leased asset on their balance sheet and claim depreciation for the asset. As depreciation is an expense for the company, claiming it reduces the profit of the lessee’s company. This, in turn, reduces the taxes that the lessee has to pay.

The lessee is not paying for the asset in question; the payment for the asset is done by the lessor. Over and above the principal, the lessor charges an interest over the years for the money he has invested in the asset. As the lessee is paying this interest, he can show this interest expense as an expense in his income statement. This, in turn, reduces the profit and the tax liability of the lessee.

When a company wants to buy or lease an asset and doesn’t have the cash for it, it usually has to ask for a loan from the bank or raise funds from the market. The capital lease is the answer to a lot of questions in this case. The lessor funds the assets in a capital lease. Furthermore, the rate of interest for the capital lease funding is comparatively cheaper than a bank loan.

Disadvantages of Capital Lease for the Lessee

When getting into a capital lease agreement, the lessee is creating a lot of debt in its balance sheet that has to be repaid in the form of part of lease payments. This increase in debt increases the debt to equity ratio of the lessee’s company. Investors view a high debt-to-equity ratio in a bad light. For the lessee, this may result in problems to raise further capital in the future.

The Possibility of being Obsolete

Let’s understand this with an example. Suppose. In 1995, a company buys 10 computers with Intel Pentium second generation processor (the latest and the most happening processor at the time) through the capital lease of 7 years. In 1997 Intel introduced Pentium-II processor, in 1999 it introduced Pentium-III processor. The lessee cannot upgrade his computers because there is still 2 years remaining for the lease to expire. By this example, we understand that when the asset is a fast-changing technology or something similar, then there are high chances that the lessee will be stuck with obsolete asset during the time of lease.

The responsibility of maintenance and repair of the asset lies on the lessee. This may not seem like much of the disadvantage at first go, but if we count the costs – regular maintenance, insurance cost, minor repairs, downtime cost etc. the expenses escalate pretty fast. An even worse situation can be for assets such as trucks. For example, if during the lease period a leased truck is met with an accident, the lessee has to pay a high cost of repair. The lessee hadn’t taken this cost into account when leasing the truck.

Advantages and Disadvantages of Capital Lease for the Lessor

Advantages of Capital Lease for the Lessor

Whenever any lessor gets into a capital lease agreement, its main motivation is to make money out of it. These lessors are usually people or companies that have a lot of free cash lying around, and they want to make money by good investments. The capital lease is one of the best forms of investment because the returns are usually higher than debt market instruments such as debenture, bonds, and commercial papers. On the other hand, the risk involved is much less than high-risk high return instruments such as equity. Therefore one can say that a capital lease is a form of investment where risk is measured, whereas return is high. 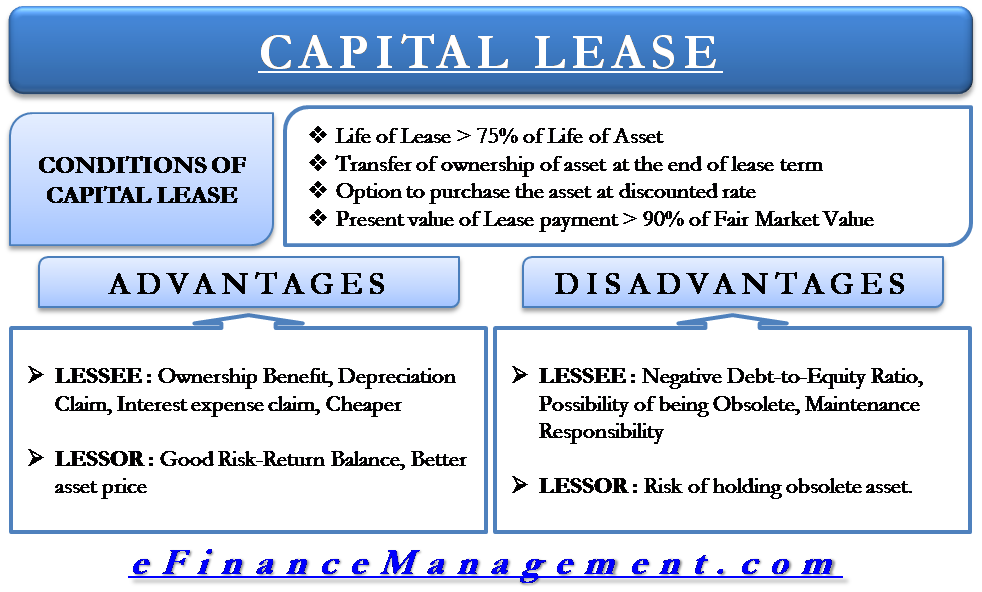 A lot of companies are solely involved in the business of leasing. They get into different types of lease agreements with multiple lessees. These companies also have special purchase arrangements with manufacturers. When such lessors decide to buy an asset to lease, they get the asset at a price cheaper than the market price.

Disadvantages of Capital Lease for the Lessor

A major disadvantage of a capital lease to the lessor is that at the end of the lease period the lessee refuses to buy the asset and he is stuck with an obsolete asset. Let’s take our previous example of a lessor leasing 10 computers with Intel Pentium second generation processor in the year 1995 through a capital lease of 7 years. Now by the end of the lease term, Intel had introduced the Pentium 4 processor. Due to obvious reasons, the lessee doesn’t want to exercise it bargain purchase option at the end of the lease. Now the lessor has 10 obsolete computers at hand and no use for it.

In such cases the lessor is definitely not making any losses, it has recovered all its investment and some amount of profit during lease payments; however, it is a drawback none the less. This is a classic case of loss of profit.

Last updated on : February 25th, 2019
What’s your view on this? Share it in comments below.
Pin It Tweet