Banks have been in existence since human society has started the business of trade. Around 2000 BC the merchants in India gave grain loans to farmers and traders to aid them in business. In the Greece & Roman empires, temples accepted deposits and gave loans. Almost every famous civilization in the world namely Egyptian, Babylonian, Mesopotamian, ancient China & India had some form of traditional banking setup.

However modern day banking is a lot more defined and regulated. As defined by Investopedia.com – “A bank is a financial institution licensed to receive deposits and make loans”. By definition, banks provide services of deposits and loans. In addition to these, commercial banks provide many other services such as – credit cards, net banking, investment instruments (certificate of deposits, etc.), purchase and sale of gold coins, and sometimes insurance as well.

Like any other institutions, commercial banks come with their own benefits and drawbacks, let’s look at them in detail. 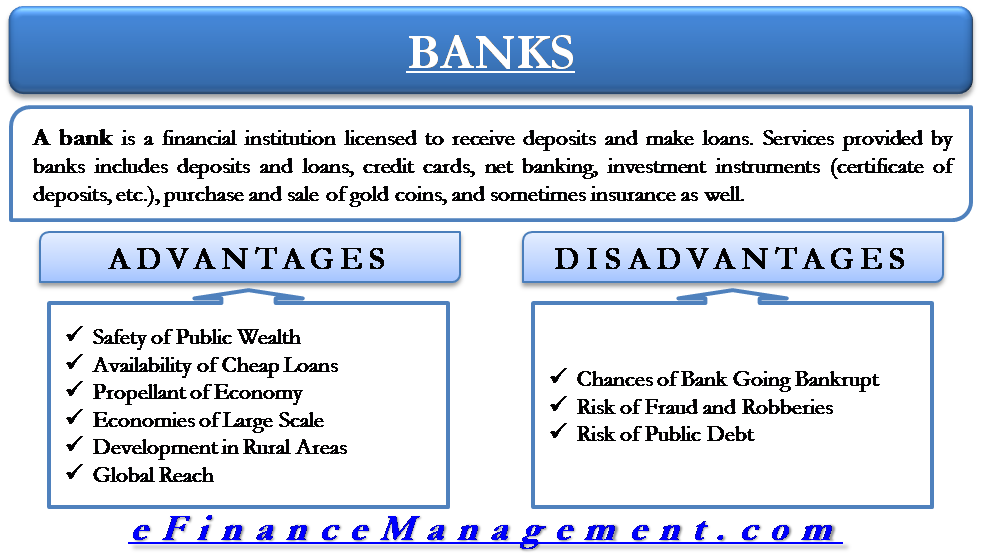 Before the introduction of the modernized banking system, people used to save their money in hard cash. They stored this cash in lockers, underground, with the grains, etc. There were so many instances when the money got stolen, eaten by the rats or simply rot through the years. However, the modern banking system completely eliminated the need to store hard cash. It actually helps save a huge proportion of public wealth that used to get spoiled in storage.

Before modern banks were established, people would borrow money from local money lenders, landlords, merchants or other wealthy individuals. These loans were given at exorbitant interest rates that most people couldn’t afford to pay, in the process the borrower would always remain in debt. It was a vicious cycle. Modern banks started providing cheaper loans to the underprivileged section of the society, breaking the whole expensive loans system.

Banks create money with a system called credit creation. With the help of credit creation, banks can lend a lot more money than the deposits that it holds. When banks lend this money to agriculture, industries, small businesses, and service providers, they are actually helping the economy grow exponentially. This, in turn, creates employment and spending power. Overall this one function of the bank is so powerful that the entire economy of any country relies on it.

An extremely important benefit of any bank is its deep and wide reach through the branch banking system and the benefits of large scale operations. The wider the bank can reach the better services it can provide. Now a day’s banks provide services of net banking, card payments, ATM’s, etc. at even the most far-fetched and backward areas. Due to these large scale operations, the services have become extremely cheap, or sometimes even free.

Banks aid rural development in more than one way. Firstly, the government makes it mandatory for the banks to lend to specialized sectors such as agriculture, rural infrastructure, etc. This leads to the development of modern infrastructure and methods in rural areas, thereby bringing in growth. Secondly, with the banks opening their branches in the backward areas, the rural population has benefits of modern bank facilities such as check-in accounts, ATM’s, locker facility, etc. Furthermore, when a new bank branch opens in a village, it needs facilities such as 24-hour electricity supply, internet connection, new staff etc. This creates employment and the villagers can also benefit from facilities of electricity and internet.

Many banks operate at the multinational level, this has helped people and businesses in a way that was not possible before the establishment of modern banks. Multinational banks aids in remittance of cash, exchanging one currency for another; aids in export by transferring documents and payments; lend money to government, institutions and other world organizations. The reach of the banks is unlimited and it has helped in making the world a global village.

Though there are many benefits of the modern banks, it comes with its fair share of flaws. Let’s discuss the disadvantages of banks to understand it better.

The world economy goes through turbulent times every few years. Events such as great depression of 1929, World War I & II, dot com bubble of 2000, or great recession of 2008, etc. expose banks to unnatural risks. During delicate periods, if all the people decide to withdraw their money from the bank, all at once, the bank will become bankrupt. Due to the function of credit creation, banks never have enough money to pay all its customers at the same time. People, without a doubt, will lose their money if the bank goes bankrupt.

Risk of Fraud and Robberies

The rise in internet banking has given rise in cybercrime as well. Now more people are exposed to the risk of credit card thefts, stolen passwords, net banking frauds, etc. There have been robberies where robbers have stolen millions of dollars through the internet, without entering the bank premises physically. With the rise in internet banking, there will be a more innovative way for conmen and robbers to cheat people. This leaves the public vulnerable. This also increases the expenses that banks have to incur to safeguard their systems, which are eventually charged from the customers.

This is not the risk of the bank per se, but this is the risk that people take on themselves while dealing with a bank. Say a person is in the habit of maxing out his credit card every month and repays the bare minimum then he will spiral into debt very fast. The habit of borrowing more than a person can afford to repay is actually a personal bad habit, however, the easy lending policies of banks add fuel to the fire. This can be damaging to people’s personal finances. It even affects businesses that take term loans and working capital loans from the banks and cannot repay it. Comparatively fewer businesses are affected by debt epidemic, but it still exists.

This brings us to the conclusion that modern banks have benefited society in many ways, and its drawbacks are such that can be easily overcome by proper policies and due diligence efforts. Thus overall the rise of banks has been a blessing for the economy and the society.

Last updated on : February 22nd, 2019
What’s your view on this? Share it in comments below.
Pin It Tweet