Depreciation is a very important and real operating expense. Although it is a non-cash expense and does not require any current cash outflow, nonetheless it can’t be ignored in the financial statements. Capitalized cost of an asset is allocated through depreciation. There are various methods of depreciation and each has a different effect on the net income of the company.

It is defined as the methodical allocation of the cost of the asset over time. There are two terms that are of importance in this concept:

Historical cost is the original cost of the asset that includes transportation and installation costs.

Carrying/Book value is the net value of the company’s asset or liability on its balance sheet. For long-lived assets, book value is derived by subtracting accumulated depreciation from the historical cost of the asset.

Depreciation expense can be calculated using the following methods:

Straight-line is the most commonly used method for determining the depreciation for reporting. Under this method, the depreciation amount remains the same each year for the entire life of the asset.

Under this method it is calculated as follows:

This is the most common accelerated depreciation method. Under this, the annual depreciation is calculated as:

The salvage value is not used while calculating using this method. However, the depreciation expense is no longer reported once the asset’s book value is reduced to the salvage value. 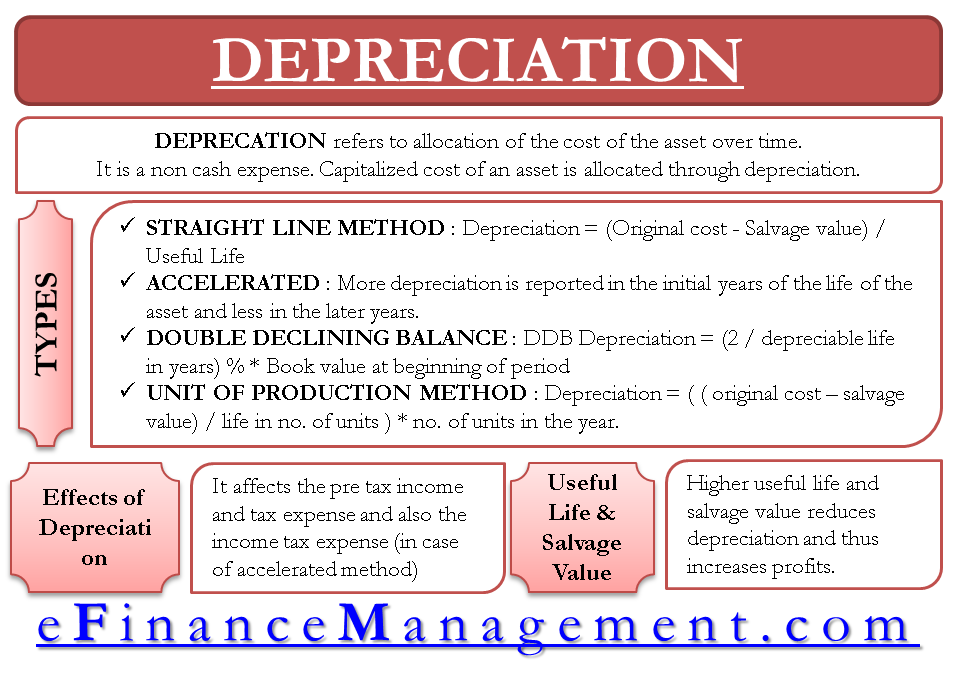 Under this method, the basis for calculating depreciation is usage and not time. Thus, the depreciation will be higher when the asset is used more.

Units-of-production Depreciation = ( ( original cost – salvage value) / life in no. of units ) * no. of units in the year.

All the above-mentioned methods stop reporting depreciation expense once the book value of the asset reaches its salvage value.

U.S. GAAP allows a company to use different methods of depreciation for reporting in financial statements and for reporting for tax purposes. However, this may not be the case in many countries. Most companies in the US prefer the straight-line depreciation method for financial reporting purposes. For reporting for taxes, they use a type of accelerated depreciation known as Modified Accelerated Cost Recovery System (MACRS). This method helps in reducing taxable income and the taxes to be paid in the initial years of the asset’s life. Thus, the payment of a portion of taxes is deferred until the later part of the asset’s life.

In this case, where companies use the straight-line method for financial reporting and an accelerated method for tax payments, the tax expense in the income statement is not changed. It causes an addition to the company’s deferred tax liability in the form of the difference between the tax expense and the taxes payable in the initial years. Later, the depreciation expense for tax purposes reduces then the depreciation expense on the income statement. This causes the deferred tax liability to reduce by the excess of income taxes payable above the tax expense.

The important thing to note is that the total depreciation over the life of an asset is the same in all the depreciation methods. The only thing that varies because of the different methods is the pattern of the depreciation expense and the taxable income.

There is also an option to change the depreciation methods. A company may opt to use straight-line depreciation method after using accelerated method for some time. This change is treated as an accounting estimate change. The change is reflected in the current reporting period as well as prospectively. No retrospective changes are required.

However, the values of depreciation, taxes, pre-tax income, net income and profit margin over the entire reporting period are not affected by the method chosen for depreciation.

Different methods yield different outcomes on the financial statements. An analyst needs to understand and appreciate the effects of the depreciation expense. He should be able to differentiate between the company’s recorded depreciation expense and the economic depreciation, which is actually the real decline in the asset’s value over the accounting period. Such subtle observations help to uncover overstated profits.1,2