The business uses the accelerated depreciation method for the following key reasons:

Faster Reduction in Value in the Early Years

The wear and tear reduce the value of some assets at a faster rate in the early years, therefore the use of accelerated depreciation methods shows the actual wear and tear on the asset over its life.

The methods that produce higher depreciation expenses in the earlier years than in the following years are therefore considered as accelerated depreciation methods. Such methods are: 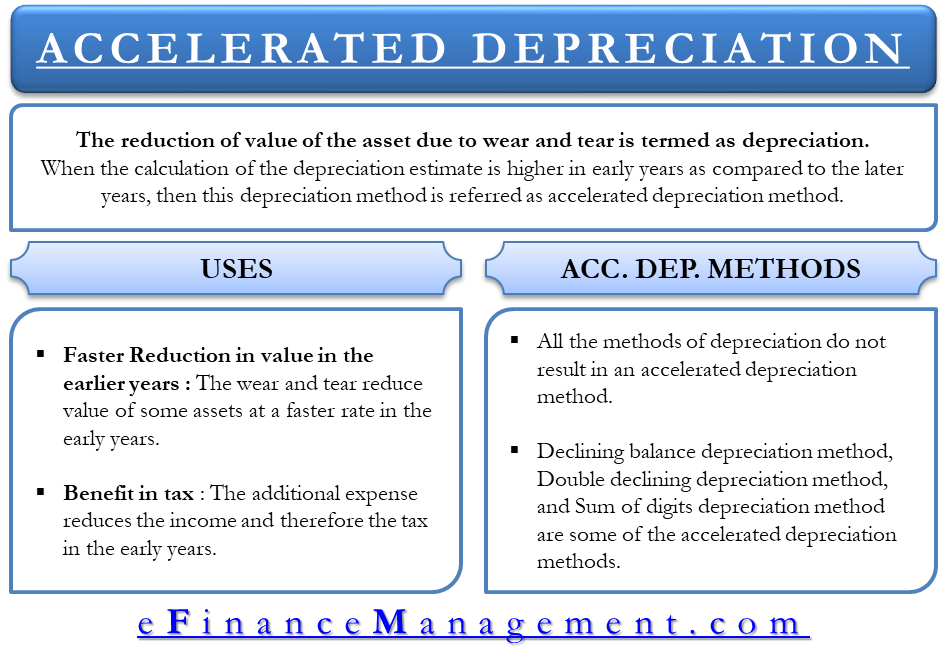 Suppose a business purchases an asset costing 40,000 having a scrap value of 2000 after 5 years of useful life. Then the accelerated depreciation for the first 5 years using the double declining balance method is calculated as:

Calculation as per Double Declining Method

This example shows that the depreciation is higher in the first year (16000) and declines in the following years. Therefore the double declining method is called an accelerated depreciation method.

Calculation as per Straight-line Method

When is this Method used by the Business?

The business uses the accelerated depreciation method when an asset will generate higher income in its early years. This helps the business to match the income generated by the asset to the expense of using the asset. The business also uses this method in case of the assets that are likely to dispose before the end of their life spans, like computers and motor vehicles.

Let’s see the example with computers. The computer can have a useful life of 7 years, but it does not work well in the last two years. Let’s say it is barely operating. The management is using it until they can get the budget to purchase the new computer.

Does it make any sense to distribute the same amount of cost in the first year when the computer was brand new and giving its best performance and to the seventh years when it was barely working? The method of accelerated depreciation takes care of this difference. This method distributes a large amount of cost to the early years and smaller portions to the later years. This way the accelerated method follows the principle of matching by matching the benefits from the asset to its expenses. The business gets to benefit from computers in the early years than the later years. Thus, they realize more cost/ expense in the early years.

Last updated on : February 27th, 2020
What’s your view on this? Share it in comments below.
Pin It Tweet