MACRS or the modified accelerated cost recovery system is the system of calculating tax deductions on depreciation in the United States. Under this, the manager assigns each fixed asset a specific asset class, which includes its useful asset life.

The modified accelerated cost recovery system is a standard depreciation method for most of the assets. It is because MACRS enables accelerated depreciation over longer periods. This benefits businesses as it allows them to deduct higher amounts during the first few years.

This system was introduced to push investment in depreciable assets through accelerated depreciation. MACRS meant more in terms of tax savings in the early years of depreciable life.

All the rules and schedules governing the Modified Accelerated Cost Recovery System depreciation appear in the US IRS Publication 946, “How to Depreciate Property.”

Depreciation is a non-cash expense and generally has a consequence on the firm’s accounts. As per the definition is given by the Internal Revenue Service, depreciation is a deduction from the income enabling a business to recover the cost of a certain asset. This works in the form of an annual allowance the company gets from the deterioration or obsolescence of the property. As a general matter of fact, most of the tangible assets are depreciable. However, there are intangible assets such as copyrights, patents that are also depreciable.

Depreciation schedule has a significant impact on Financial Reporting. Every business reports the depreciable life of the assets in use. It is widely known that depreciation expense brings down the tax liability of the owner by reducing the reported earnings. Thus, under accelerated depreciation method the tax saving is much higher resulting in higher returns in comparison to the straight-line depreciation.

Further, depreciation expense also brings down the asset book value by converting the part of the original asset purchase amount into an expense. Such an adjustment allows the owner to implement the accounting matching concept. Under matching expense concept, a company records expenses as and when they incur it. Therefore, the deprecation expenses occur as and when the company uses the assets or there are wear and tear. 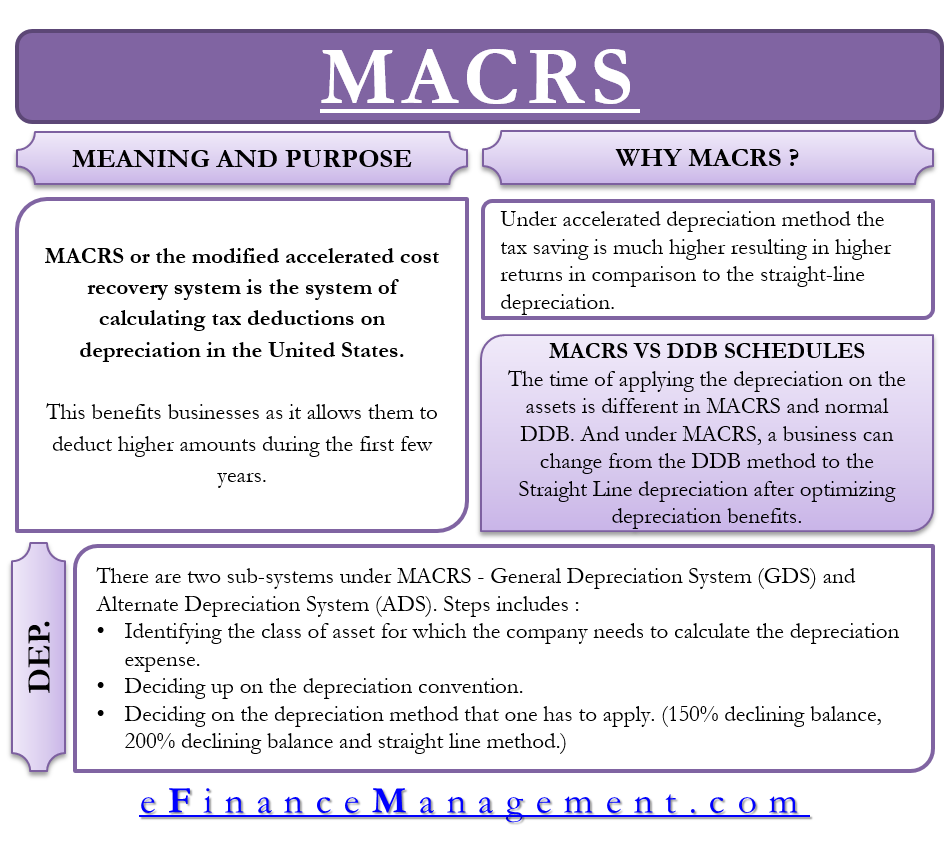 Secondly, under MACRS, a business can change from the DDB method to the Straight Line depreciation after optimizing depreciation benefits.

First, identify the class of asset for which the company needs to calculate the depreciation expense. Usually, account managers classify properties in different categories depending on the useful life and a recovery period. Also, the IRS lists the useful lives of various classes of assets to calculate depreciation. For instance, Information technology (IT) systems including other kinds of office equipment and automobiles have a five-year depreciable life.

Second, the business would need to decide on the depreciation convention. For simplicity, the IRS has instructions on when to treat the asset as acquired at the mid of the month, quarter or the year. Such conventions are mid-month, mid-quarter and half year conventions.

Under 150% Declining Balance Method, the rate is 150% more than the straight-line method. The depreciation method changes to a straight line when the earlier one results in an equal or greater deduction.

Straight Line Method (SLM) as you will be aware results in the same amount of deduction each year except for the first and last year of service. For more information on the convention, class, and methods visit this link.

Let us understand the calculation with the help of an example where a machine of $5,000 comes on Jan 1st.

First, we need to classify the asset. From the IRS classification of asset property, the machine is 7-year property.

Next, we have to select the depreciation method. As per IRS guidelines, it will be a half-year convention. Also, since it is a “nonfarm”7-year properties, we will use a 200% DB method.

Now, based on rates by IRS for 7-year property, we get the depreciation rate of 14.29% for the first year on 200% declining balance.

In another example, a company buys a computer for $5,000 on April 1st. It is a five-year property and depreciation method is Half-year convention. Since it is a “nonfarm” 5-year property, we will apply a 200% DB method. Using rates from the IRS, we get the depreciation rate of 20% for the first year.

MACRS may help businesses to magnify their returns, but it is not advisable for audited financial statements. This method has got the approval by the IRS for tax reporting, but not of GAAP for external reporting. This is because it ignores the asset’s useful life and salvage value. Therefore, businesses maintain separate books for tax accounting purposes.