Basis of Classifications / Types of Mergers:

Mergers can be differentiated into various types depending on the following:

Mergers can be classified depending on how both the companies physically combine themselves in the transaction to form one entity.

Mergers can be classified depending on how the business activities of both companies relate to each other. The economic function and the purpose of the transaction define the types of mergers. 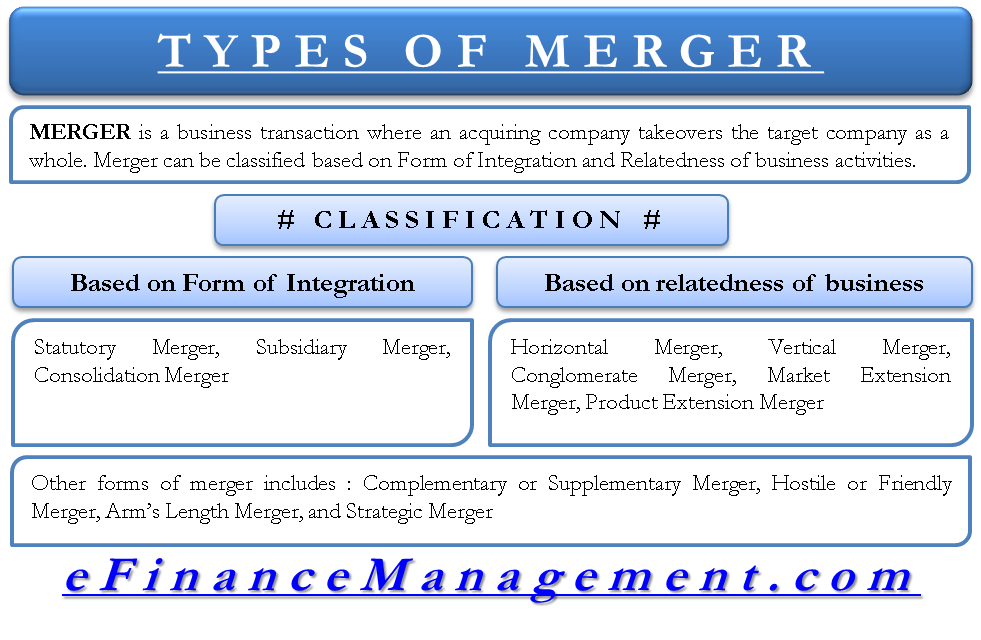 Classification by the Form of Integration:

The mergers can be classified as follows on the basis of forms of integration:

A statutory merger is one in which all the assets and liabilities of the smaller company is acquired by the bigger (acquiring) company. As a result, the smaller target company loses its existence as a separate entity.

Company A + Company B = Company A

Company A + Company B = Company C

Classification on the Basis of Relatedness of the Business Activities:

The mergers can be classified as follows on the basis of relatedness of the business activities:

A merger that happens between companies belonging to the same industry. The companies have businesses in the same space and are generally competitors to each other. A horizontal merger is a feature of an industry which consists of a large number of small firms / fragmented industry. The level of competition is high and the post-merger synergies and gains are much higher for companies in such industries. The motivation behind such merger is economies of scale and control of bigger market share.

A vertical merger is a merger between companies that produce different goods or offer different services for one common finished product. The companies operate at different levels in the supply chain of the same industry. The motivation behind such mergers is cost efficiency, operational efficiency, increased margins and more control over the production or the distribution process. There are two types of vertical mergers:

A vertical integration where a company acquires the suppliers of its raw materials.

A vertical integration where a company acquires the distribution channels of its products.

A merger between companies that have same products to offer but the markets are different. The reason behind such mergers is access to bigger markets and an increase in client base.

A merger between companies that have different but related products but the markets are same. Such mergers allow the companies to bundle their product offerings and approach more consumers.

Besides the above classifications, there are other characteristics of the deals also, that may further define the types of mergers:

A merger can be hostile or friendly depending on the approval of its directors. If the board of directors and the managers of the company are against the merger, it is a hostile merger. If the merger is approved by them, it is a friendly merger.

A merger of a target company with an aim of strategic holding over a longer term. An acquirer may pay a premium to target in this case.

A business combination gets complex not only with the legal issues but also with the type of a merger. A merger can vary according to the way companies come together or their economic functions. It is important to understand the type of merger to appreciate the intricacies involved.1,2

1 thought on “Classification / Types of Mergers”