Another peculiar feature of a temporary overdraft is that it is usually extended to people and not business entities. This product is specially tailored for personal finance and is not very prevalent commercial finance option.

Pre-Requirement of a Temporary Overdraft

If a person has a personal property such as house, land or holiday home, he can mortgage such real estate to attain temporary overdraft facility. The banks extend 50% to 60% of the property value as overdraft limit as per bank policy. Which means if a person mortgages his apartment worth USD 50,000.00, then he will have an overdraft limit of up to USD 25000.00 to USD 30,000.00.

Though equity stocks are risky, many banks consider equity stock as collateral. The bank decides the overdraft limit after a thorough analysis of the type of stock that the borrower is offering.

Banks offer a temporary overdraft facility against borrower’s monthly salary. Consider your monthly salary as USD 5,000.00 per month, then you will be eligible for overdraft up to USD 2,500.00 against the salary.

Advantages of a Temporary Overdraft Facility

There are many advantages of a temporary overdraft as follows –

Temporary overdraft is an excellent short-term financing option. Let’s consider a situation to understand this well. It is Black Friday today. You went to your local electronics store and found out that the latest iPhone worth USD 1000.00 is available at USD 700.00. You check the balance in your account. Oh dang! You got only USD 600.00, but you really want to buy this phone and you will not get this kind of discount soon. Suddenly you remember that you have a temporary overdraft facility on your account. So you overdraw your account and buy the iPhone. You are going to receive your salary next week anyway, so you can repay your overdraft then.

No other bank credit product finances personal needs for such a short period of time. 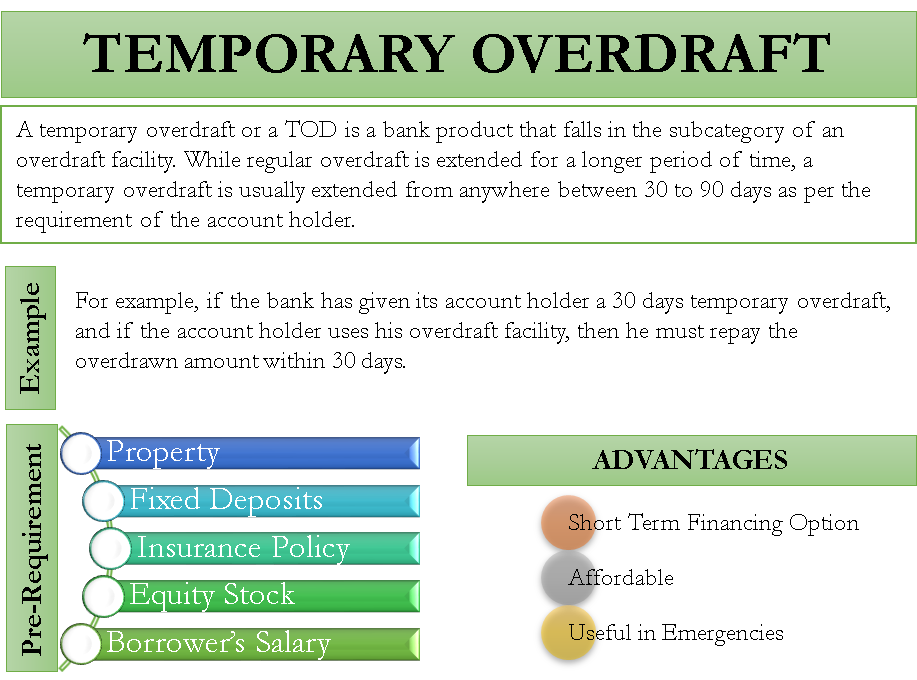 Though a temporary overdraft facility is more expensive than a regular overdraft facility, it is usually more affordable due to its usage. Let’s continue our above example for better understanding. Black Friday is over, you got your favorite phone. Next week when you get your salary in your bank account, your overdraft is repaid and the applicable charges of USD 10.00 and interest* of USD 0.20 i.e. total of USD 10.20 is deducted from your account. It’s still a neat USD 289.80 discount on original price (Discount of USD 300.00 – overdraft charges of USD 10.20 = USD 289.80). Thus we can say that in perspective, a temporary overdraft facility can be very affordable at times.

Last updated on : October 14th, 2018
What’s your view on this? Share it in comments below.
Pin It Tweet