Companies usually avail overdraft protection to fund their operating cycles. Operating cycle is described as a time gap between investment and realization of funds used in a company’s regular operations. The overdraft limit decision process is a two-step process as follows: 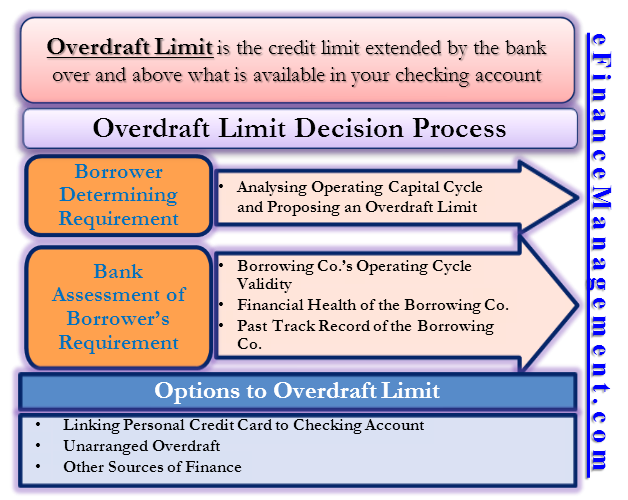 Following are the observations from Max International’s transaction statement –

In conclusion, we can say that it would be feasible for Max International to apply for an overdraft limit of USD 4500.00 to its bank.

Financial Health of the Borrowing Company

The banks assess the financial health of the borrowing company to determine an overdraft limit. It considers ratios that help to know the efficiency of the company such as the average number of days receivables outstanding, average number of days payables outstanding, inventory turnover ratio etc. It also considers the current ratio and quick ratio to determine the short-term solvency of the borrowing company. This helps the bank understand whether the borrowing company is capable of repaying the overdraft limit that it is asking for. Sometimes there are companies who are extremely profitable but their working capital cycles are inefficient and overstretched, in such cases banks might reconsider the proposed overdraft limit.

Past Track Record of the Borrowing Company

The banks also look into the borrowing company’s past track record. This includes its credit scores and past transaction history with the bank. A borrower who has a checking account with its bank for the past 10 years and is efficient and timely in all its transactions with the bank has high chances of getting the overdraft limit it has asked for. On the other hand, a borrower who has missed multiple payments to the bank in the past and has a low credit score might not get an overdraft limit at all.

This brings us to the conclusion that overdraft limits are tailor-made for each applicant.

For example, ABC Ltd. finds out from its projections that it will be overdrawn up to USD 500.00 for 2 days in the year 2018. Following are its bank charges –

Other Sources of Finance

If in spite of not getting access to an overdraft facility, the company needs to fund its operating cycle it can always look into other sources of finance such as advances from customers, extended credit period from vendors, short-term borrowings from friends, etc.