An overdraft occurs when an account balance goes below zero after a transaction and can be viewed as a short-term loan from a financial institution. The most common example is when a company writes a check for more than the amount available in the checking account. For example, if a company has a balance of USD 200 in its bank account and has issued a check for USD 400, the account will be overdrawn by USD 200 after the check is cleared. This situation implies that the company had an agreement with the bank for a overdraft and that the overdraft limit was higher than USD 200. Otherwise, the check would not have been cleared.

What is Bank Overdraft?

A bank overdraft facility means an additional source of liquidity available to businesses and a useful tool to manage short-term cash flow problems. Generally, an overdraft account will be an integral part of a company’s cash management which will typically include an offsetting arrangement against the other company’s accounts.

Overdraft facilities are customized to the needs and financial situation of the borrower. The specific terms and conditions will be set forth in a credit agreement which will typically include the following provisions.

Use of Bank Overdraft

Overdrafts are made available for general corporate purposes. They are used to ease pressure on working capital and as a back-up for unexpected expenditures. Overdraft facilities are provided on a revolving basis meaning that funds can be reimbursed and re-used at any time.

An overdraft limit is determined based on the credit worthiness of a borrower and the availability of collateral or a guarantee.

Interest on the overdraft will accrue from day on the day only on the amount outstanding. The interest rate will usually be a fixed margin over the appropriate base rate. A margin between 4% and 9% over the base rate is usual. Banks will typically charge an overdraft fee and a set-up fee as well.

Some lenders will require borrowers to provide collateral in the form of deposits or fixed assets so that their position is secured if something goes wrong. A secured overdraft could also benefit from a more favorable pricing than an unsecured overdraft. In case the borrower defaults, a bank could seize and liquidate the collateral up the amount owed to the lender. In some cases, the bank will also require the borrower to maintain a certain amount of fixed deposit with the bank.

Overdraft facilities are usually approved for a short period of time ranging from a few months to a year and they should not be used by companies as a source of long-term financing. It should be noted that overdraft facilities are often structured as demand loan giving the lender the right to call, or cancel, the overdraft at any time without further explanation.

In large groups, it is common for a subsidiary parent company with a strong balance sheet to provide a guarantee for the overdraft account of a weaker sister company.

In the general ledger, the cash account will have a credit balance when there is negative balance in the bank account. The negative balance will not appear as a negative asset but it will instead show as a short-term liability as an overdraft is considered a short-term loan. The overdraft will also be included in the cash section as an asset on the Balance Sheet. The overdraft, like any other loan, will also appear in the Cash Flow Statement as an increase in cash flow from financing activities. Conversely, the repayment of the overdraft will decrease the short-term liability and appear as decrease in cash flow from financing activities.

The interests and fees charged by the bank will be recorded as an expense on the P&L and reduce net income and shareholder equity through the retained earnings section on the Balance Sheet,

Finally, when a guarantee is provided to a bank on the overdraft facility of another company, the guarantor will typically report as a contingent liability section in the footnotes to its financial statements. 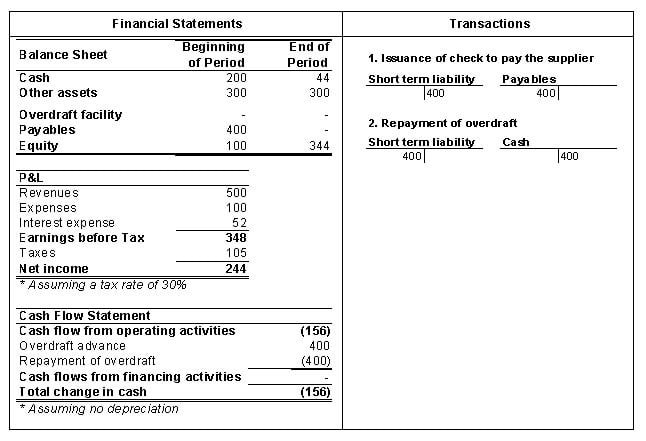 Cash flow from operating activities is arrived at as follows: