Nominal Value (NV) is a common term used in finance and economics. In the field of finance, we use it primarily for bonds and stocks. It refers to the face value or par value of the security or its redemption price. The NV of security is generally given on the front/ face of that security.

In economics, the NV is the unadjusted rate or the rate without adjusting for inflation and other relevant factors.

For any security, a bond or stock, the nominal value is the value that does not change until the maturity. In contrast, the market value of a security change as per the change in the external factors, including inflation. Or, we can say NV is the amount that the bondholders usually get at the time of maturity. Generally, the corporate bonds carry an NV of $1,000, while municipal bonds’ NV is $5,000.

Talking of ordinary stocks, NV is an arbitrary value that a company needs for use in the balance sheet. It has no impact on the market value of the stock. For example, a company gets permission to raise $2 million in equity, and the par value is $1. In this case, it can issue up to 2 million shares.

The difference between the selling price and the face value of a stock is the share premium. On the balance sheet, this share premium will come as additional paid-in capital. For example, if the company can sell $2 million face value equity at $4 million, then $2 million will be paid-up share capital, and the balance will come as additional paid-in capital.

In economics, the NV is just the current prevailing monetary value.  This prevailing value does not account for any adjustments for inflation. When comparing numbers over some time, the NV is not much of use as it does not factor inflation. 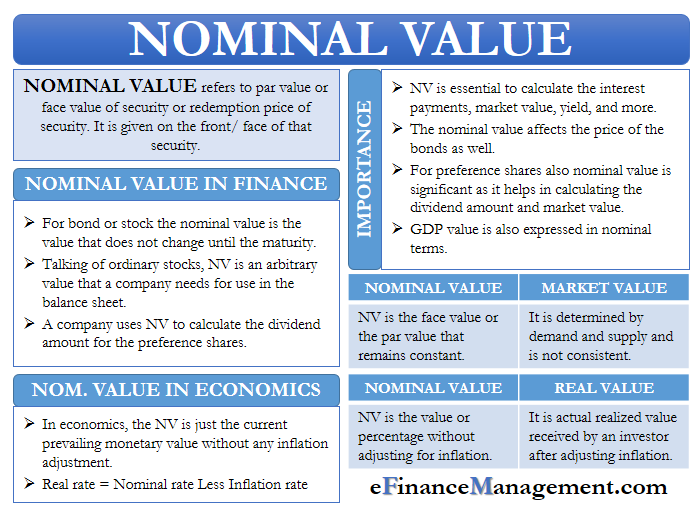 As said above, the NV is the face value or the par value that remains constant. On the other hand, the market value is not consistent. The market value continues to fluctuate. And the fluctuation depends on the demand and supply of the security, as well as external factors.

For example, Company A issues its shares at face value of $10. It will not change. After it lists its shares on a stock exchange, the value of shares shoots up to $40. This $40 is the market value.

Another difference between the two is that NV is assigned arbitrarily, while demand and supply forces determine the market value.

Calculating real values gets very important in cases where inflation may skew the results significantly. For example, a bond offers a coupon rate of 3%, but inflation is 3.5%. The real rate, in this case, will be -0.5%, meaning the investor is actually at a loss with 3% interest.

GDP (Gross Domestic Product) figures are also in nominal terms. However, they do not always give the right picture. If a country has experienced a GDP growth, then the growth could be due to an increase in the price levels. If such is the case, then it is not the sign of a healthy economy. To get the accurate picture, we need to find the real GDP figure.

Even though the nominal values are simple and easy to understand, they suffer from a few drawbacks as well. These are: