Founders stock as the name suggests are the shares issued to the founders of a company. Apart from founders, it can also refer to the shares given to the early investors in the company. Such shares are not much different from the common stock that trade in the secondary market. The only difference being the founders stock is issued at par value and come with a vesting interest.

Why is Founder’s Stock Issued?

A point to note is that founders stock is not a legal term in itself. Therefore, one won’t find any such things in the corporate code or any other legal document. Rather, the term has come in use to describe the shares given to the early participants in the formation of a company.

Thus, the company’s founders could include initial founders, early directors, partners, and first investors. Basically, these are the persons responsible for transforming the idea of a company into a reality. To compensate such people, a company issues founders stock to them.

After the start of the business, a company may give new team members stock with the same characteristics. Such stocks are also often called “founders.” However, it gets difficult for a company issues these shares at par. Therefore, after incorporation, companies normally close “founder” class of stock. 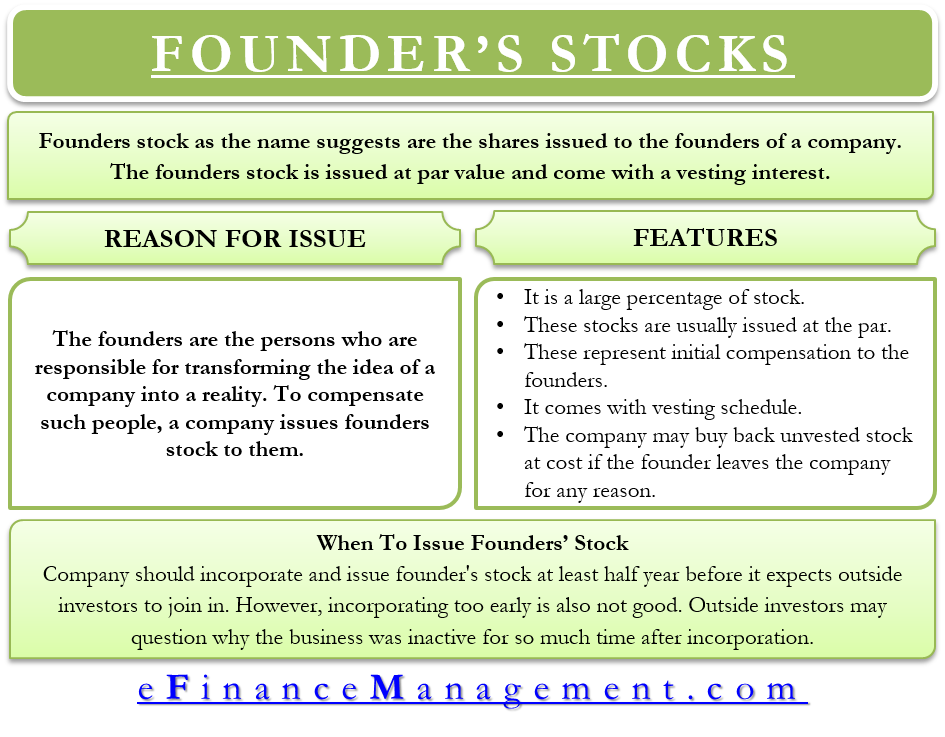 A company usually allocates and commits to founders’ stock initially, but the founder doesn’t get to own (vest) these shares until a later date. Vesting means the time until founders get to own the stock fully. For instance, if a founder gets shares with a vesting period of five years, it means he or she don’t fully own the stock until then.

Companies, mostly startups, place some stock restriction agreements to ensure that individuals don’t misuse it or they remain loyal to the company. Restrictions include the time limit after a founder can sell these shares in the market.

Usually, a company sets a vesting schedule for the founder’s stock. This allows a company to buy back the shares if the founder leaves the business before his or her shares are fully vested.

Vesting also helps in addressing the free rider problem. This means that if one of the founders plans to leave when the company is still young, he or she does not get any more benefit at the expense of those who are staying with the company. Usually, venture capital or angel investors also ask for vesting restrictions.

Apart from the fact that a company issues such shares at a very low price, there are more differences between the common stock and founders stock. These differences are mostly in terms of dividend and other rights.

Whether or not the founder’s stock gets the same rights as other common stockholders depends on the agreement between the founder and the company. Some of the exclusive rights that such shares may get are super-voting rights, right of first refusal, lock-up agreement, accelerated vesting upon the sale of the business, and co-sale provision.

Under ‘right of first refusal,’ a founder must offer his or her shares to the company first before selling it to a third-party. In ‘co-sale provision,’ the founder gets the right to add their shares if the company is issuing additional common shares. Under super-voting rights, founders get more than one vote per share. This is important if early founders plan to retain control over the company. A “lock-up agreement” limits the sale of the stock for sometime after the IPO. The lock-up is usually for 180 days.

A company may include other special clauses as well after the discussion with the founder.

Tax Concerns or When To Issue Founders’ Stock

Usually, founders don’t incorporate a company until an investor or investors start showing real interest in the company. This can result in a significant tax liability if a business is close to getting capital.

For instance, if a company issues founders stock at $0.01, and shortly, outside investors get a stake at $1 per share. An audit may reveal that the founder got the stock well below the fair market value. Thus, the difference in the price may represent an income for the founders’ and hence, is taxable.

To avoid such issues, a company should incorporate and issue founder’s stock at least half a year before it expects outside investors to join in. However, incorporating too early is also not good. Outside investors may question why the business was inactive for so much time after incorporation.