What is Basel III?

Basel III is a list of comprehensive reforms whose goal is to strengthen the regulation, supervision and risk management of the banking sector.

This is just the definition of Basel III. However, in order to gain a complete understanding of the framework, we need to understand its history and origin.

In 1974, a committee was formed by central bank governors of the Group of Ten countries*. This committee was named the Basel Committee on Banking Supervision (BCBS). Its main aim was to enhance quality banking regulations and converge worldwide banking standards to improve the safety and efficiency of banks around the globe.

Basel three framework is built upon Basel I and Basel II framework. The focus of Basel III is to promote greater resilience at an individual bank level so that the risk of system-wide shocks is reduced.

The Basel III framework consists of three pillars as follows –

Pillars of Basel III accord

Capital reserves serve as a buffer to absorb shocks during a financial crisis. Banks are required to hold a certain percentage of their capital as reserves. This capital is further divided into Tier 1 and Tier 2 capital. Let’s understand each of these –

The Basel III accord proposes the following implementation in the quantity and quality of this capital. Following are the proposals: 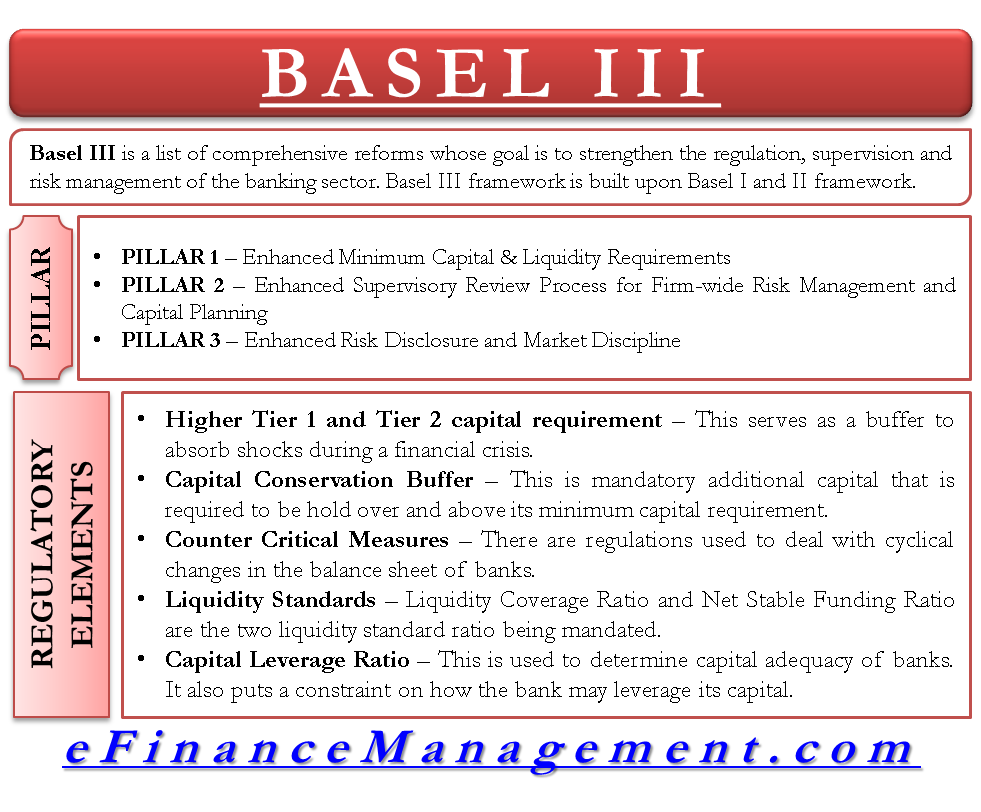 A capital buffer is mandatory additional capital that the banks are required to hold over and above its minimum capital requirement. This is designed to ensure that banks build up enough capital so that it can meet the challenges of times of stress and financial crisis.

According to Basel III, the countercyclical capital buffer should be in the range of 0 to 2.5%. This is in addition to minimum capital requirements and capital conservation buffer.

In order to ensure that banks do not run out of liquidity in times of crisis, Basel III puts in place regulations to maintain liquidity standards. Following are the list of regulations –

Basel III accord requires that the banks keep their capital leverage ratio minimum of 3%.

As the Financial Stability Board states – “Full, timely and consistent implementation of Basel III is fundamental to a sound and properly functioning banking system that is able to support economic recovery and growth on a sustainable basis.” However, the adoption of Basel III regulations is a challenge for all banks. In order to aid an effective and timely adoption, the Basel committee has recommended a timeline of phase wise implementations to give banks the time to build quality capital and appropriate standards. As per the latest BIS press release, the final Basel III minimum requirements are expected to be implemented by 1st January 2022 and will be fully phased in by 1st January 2027.1–3