Bank for International Settlement BIS is the financial institution meant for the Central banks across the world. It basically serves as a bank for the member central banks and works towards financial stability and corporation. The institution is one of the last resort for the Central Banks and acts as an emergency lender for the nations that reel under debt pressure.

Founded in 1930 out of Hague Agreement, BIS replaced the Agent-General for Repatriation in Berlin. As per its official website, a total of 60 Central banks of different countries came together to form Bank for International Settlement BIS. These nations together constitute around 95% of the world GDP. Bank for International Settlement BIS has its head office in Basel, Switzerland with two representative offices in Hong Kong and Mexico City.

The office in Hong Kong represents Asia and the Pacific region, while the Mexico office is the Representative Office for the Americas.

The main activities of the American office include:-

Office of Asia and Pacific has similar roles and responsibilities as the Office of America. Bank of International Settlement BIS created the Asian Consultative Council (ACC) – established on March 12, 2001 – to look over the activities of the Asian Office and acts as a Secretariat. The ACC helps in building communication between the central banks in the region and the BIS’s Board Management on matters of significant value to the Asia-Pacific Central Banking community. 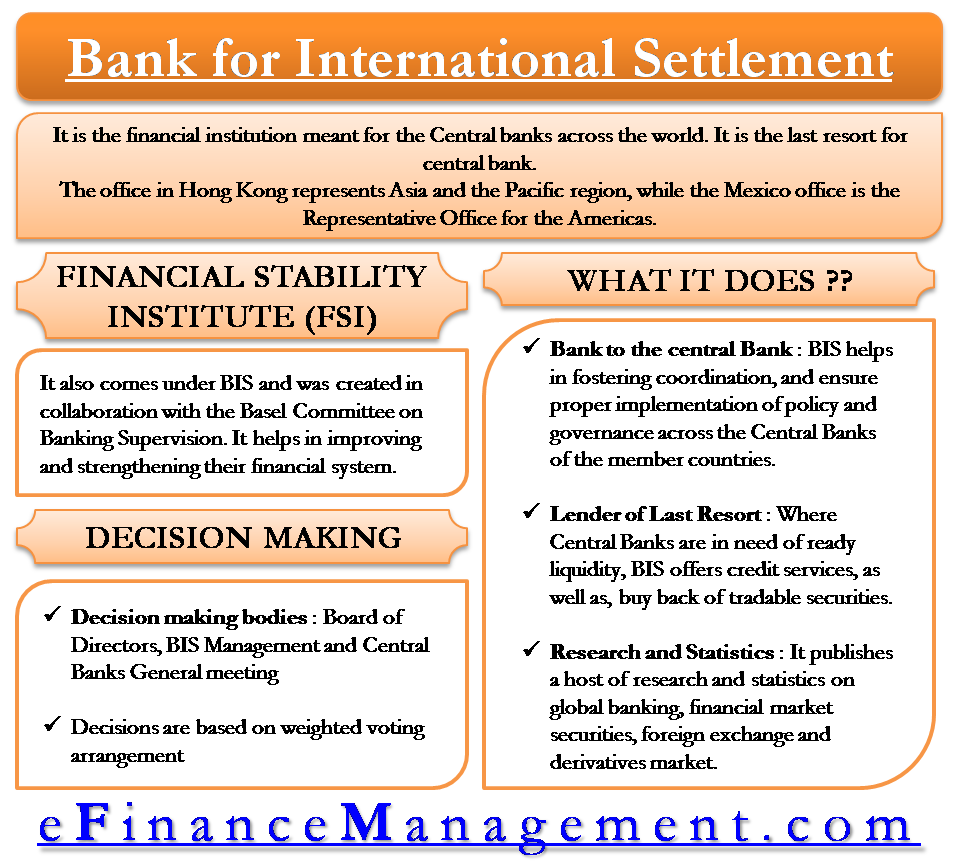 FSI also comes under BIS and was created in collaboration with the Basel Committee on Banking Supervision. FSI is responsible for helping supervisors across the globe for improving and strengthening their financial system.

The key objectives of FSI are:

Establishing rational supervisory standards and practices across the world. FSI also strives towards full implementation of these standards in all the countries.

FSI provides the supervisors with up-to-date information on the market, practices, products, and techniques.

Provides a platform for discussions over policy and supervisory practices and experiences.

Bank to the Central Banks

As discussed earlier, BIS helps in fostering coordination, and ensure proper implementation of policy and governance across the Central Banks of the member countries. BIS offers high returns to the Central Banks on the funds they invest and also provides liquidity by buying back tradable securities from the Central Banks.

Lender of the Last Resort

Banking for International Settlement BIS offers a host of financial services to the Central Banks, as well as, other financial institutions in the management of foreign reserves. In the event, where Central Banks are in need of ready liquidity, BIS offers credit services, as well as, buyback of tradable securities. BIS can also act as a trustee related to international financial operations, thereby, promoting global financial and monetary stability globally.

BIS publishes a host of research and statistics on global banking, financial market securities, foreign exchange, and derivatives market. It shares its information across the Central banks of the member countries, and this, in turn, helps them to make more informed decisions. The research is also open for academic journals and other external publications. It is the BIS staff that conducts and concludes all the researches. However, member countries Central Banks also help in conducting the research and publishing the same.

Apart from the above functions, BIS performs the following tasks:

BIS has come in existence and is running since with the aim of fostering monetary and financial stability. It has played and is playing a major role in developing the global financial market. Moreover, the organization acts as a stabilizing force and encourages financial stability during challenging social, political and economic situations.

Last updated on : April 25th, 2019
What’s your view on this? Share it in comments below.
Pin It Tweet