Banks are financial institutions that have been lending funds to individuals and corporate bodies down the years. On occasions when an individual needs funds/face a liquidity crunch, he may approach a bank to solve his problem. The bank then checks his creditworthiness and issues him funds as per terms that are mutually agreeable. However, what happens if a bank faces a similar crisis? This is precisely where the lender of last resort (LOLR) steps in. 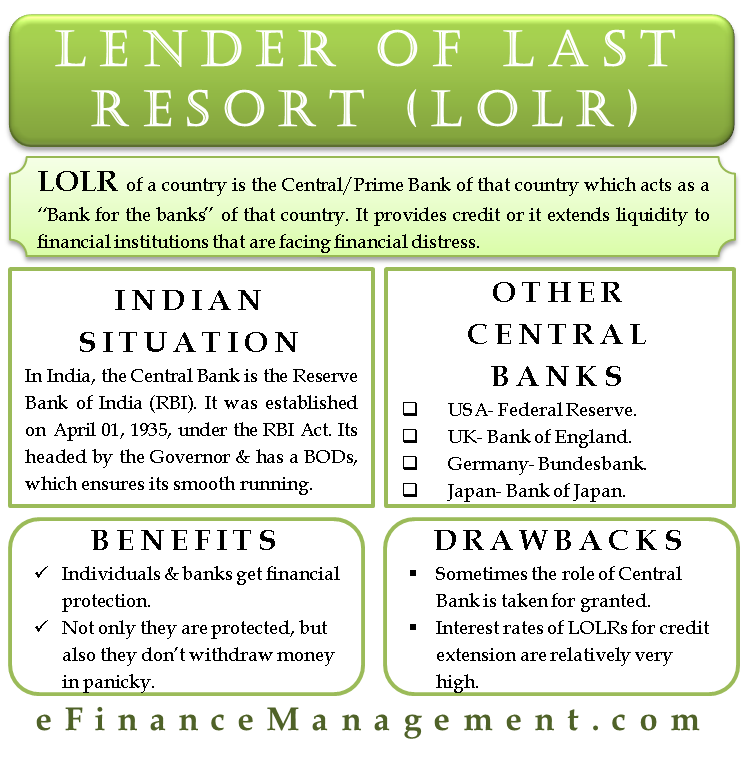 The LOLR of a country is the Central or Prime Bank of that country which acts as a “Bank for the banks” of that country. It provides credit or it extends liquidity to financial institutions that are facing financial distress.

Typically these institutions have no other means of credit. And their inability to obtain funds is likely to have severe ramifications on the country’s economy as a whole.

Central Banks in Other Countries

Down the years the Central Banks of other countries have had to bail out financial institutions when risky practices have caused them to suffer a severe credit crunch.

The table below presents the Central Banks of some prominent countries:

The Federal Reserve had to step in on the occasion of the financial institution called Lehmann Brothers going bust as a consequence of dubious financial practices that were very harmful to its net worth. Bear Stearns too was a firm that necessitated the Federal Reserve to use its bailout powers, so that the economy of the US as a whole, did not suffer.

The International Monetary Fund (IMF), headquartered in Washington D.C. acts as the LOLR for nations whose economy is in a shambles. In the recent past, Greece and Iraq have sought funds from this body, so as to tide over financial emergencies that have plagued their economies.

Closer home, the RBI had to decide on the course of action to adopt when Global Trust Bank suffered severe losses that endangered the funds of its account holders.

Benefits of a Lender of Last Resort

Drawbacks of a Lender of Last Resort

The major negative seen in the Central bank being the safety net to financial institutions is that sometimes banks are perceived to take the role of the Central bank for granted. This causes them to not pay heed to the checks and balances that have to be maintained when lending funds or procuring funds, which exposes them to grave financial risk. The rates of interest at which LOLRs extend credit may be relatively high. This may be because of the high-risk profile of its debtors.

Lenders of Last Resort certainly have a very salient role to play in today’s dynamic financial markets. Globalization has widened horizons and has extended markets in ways that funds are utilized (or sometimes misused), which certainly calls for a watchdog body that can step in to douse the flames when a bank or corporate body is in dire straits. It has to perform its duties judiciously so that its presence may retain a much-needed relevance. At the same time entities should be able to benefit from its source of funds. This is very often the only lifeline that safeguards the cash-strapped body and perhaps the country’s economy in general.

Last updated on : January 12th, 2019
What’s your view on this? Share it in comments below.