The Efficient Market Hypothesis, or EMH, is a financial theory that says the asset (or security) prices reflect all the available information or data. Further, EMP (also called Efficient Market Theory) says that it is impossible to beat the market, or consistently produce more than average returns.

The theory is credited to economist Eugene Fama, who in the 1960s developed it from a Ph.D. dissertation. Fama’s research can be found in his 1970 book, titled – Efficient Capital Markets: A Review of Theory and Empirical Work.

EMH assumes that investors act rationally or normally. For instance, if there is unusual information, then an unusual reaction to it is normal behavior. Or, running in the same direction where everyone else is running is also normal behavior.

Another assumption of the theory is that all relevant information is available freely and widely. Also, such information is shared among all the investors.

Efficient Market Hypothesis – What it Says?

The theory states that at any a given point of time, a stock price reflects all available information that is publicly available. Or, we can say, the theory says that a stock trades at fair value all the time. Basically, the theory implies that beating the market return is more of a chance than selecting the right stocks by doing research.

Moreover, the EMH also suggests that it is impossible for an investor to find undervalued stocks or sell stocks at a premium. The theory also seems to suggest that fundamental or technical analyses are not useful under the Efficient Market Hypothesis. 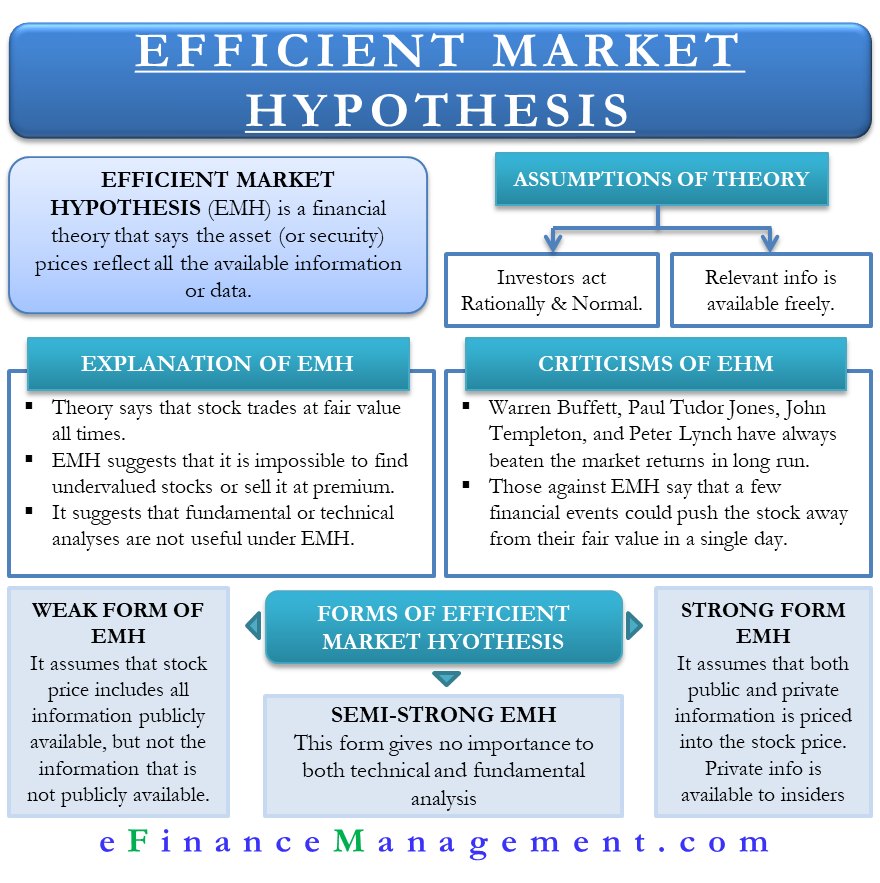 Though there are many who support the theory, a few exceptions to the theory exist. The biggest exception is legendary investor Warren Buffett, who has always beaten the market returns in the long term. Others who consistently generate above-market returns are Paul Tudor Jones, John Templeton, and Peter Lynch.

EMH theory refers to those generating above-average market returns as lucky. But, it does not explain how the same people can be lucky all the time, including in the long-run.

Also, those against EMH say that a few financial events could push the stock away from their fair value in a single day. For instance, the stock market crash of 1987 pushed DJIA (the Dow Jones Industrial Average) down by over 20% in a day.

We can say that if the assumptions of EMH are correct, then there shouldn’t be any market crash. During a crash, stocks trading at high valuations gets a crush. However, EMH assumes that all securities trade at fair value all the time.

There are three forms of EMH:

Though the weak-form EMH does give no importance to technical analysis, it does leave open the possibility that high-level fundamental research could help an investor beat an average market return.

This form gives no importance to both technical and fundamental analysis. Semi-strong EMH believes that price adjusts quickly to any new public information. And, this leaves no chance for fundamental analysis to predict the price movement. For example, stock prices quickly adjust to inflation data.

What Passive and Actives Investors Do?

Those who believe in the EMH or the passive investors can go for the index funds or certain ETFs. Such financial options are managed passively, means their objective is not to beat the overall market returns. Such an investment strategy also aligns with a common saying “if you can’t beat them, join them.”

There have been several studies that support the EMH, such as a long-term study by Morningstar. Such studies and the proponents of EMH have led to the rise in the popularity of the funds that try to mirror major indexes.

Also, a point worth noting is that the Efficient Market Hypothesis raises a question on the existence and the business model of the investment companies. Such companies pay a massive amount to fund managers to generate returns more than the average market return.1–3

Last updated on : March 15th, 2020
What’s your view on this? Share it in comments below.
Pin It Tweet