Withholding Tax or the retention tax is a way of deducting tax at the source of the income to avoid collecting tax after the income is earned. Usually, it is the amount withheld by the employer from the employee’s income. The employer then pays it directly to the government. When the employee files his tax return, he or she can take credit for this withholding tax.

In simple words, we can say, it is the money taken out from employee’s income to pay taxes in advance that he or she would be liable to pay later.  This tax can also be levied on interest and dividends income from the securities. Moreover, it is applicable to both residents and non-residents of a country.

Such type of tax is present in almost all tax systems. Moreover, such a tax is mainly applicable to income from wages, royalties, dividends, interest and more.

Withholding taxes were introduced during the term of President Abraham Lincoln in 1862. It was introduced primarily to fund the Civil War. After the Civil War, such tax was abolished but was again picked up in 1943. At the time, the thinking was it would become very difficult to collect taxes if not collected from the source. At the time of hiring, the employee needs to fill out a W-4 Form, which helps in estimating the taxes.

In the US, two different types of withholding tax are in use that ensures incomes are taxed in every situation. These are:

Collecting this tax is the responsibility of every employer in the US. Usually, an employer collects this tax and then remits the same to the government. In this case, the employee will have to pay the remaining tax (if any) when they file the return later. If the employer withheld more taxes, then the employee would be eligible for a refund.

It is desirable that the employer withholds the maximum tax that an employee is liable to pay. This ensures that employees pay most of their tax on time, otherwise they need to pay a heavy fine.

One can also make use of a tax withholding estimator to ensure that they pay the correct amount of tax. A point to note is that the independent contractors and investors are not liable to withheld tax. 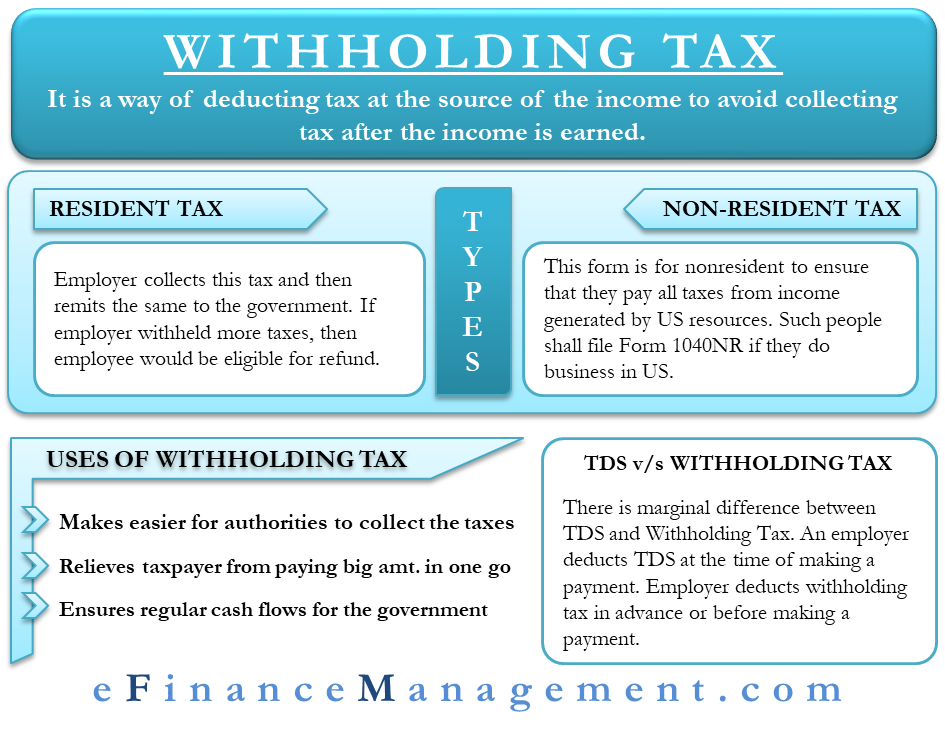 This form is for the nonresident to ensure that they pay all the taxes from the income generated using the US resources. A non-resident is a person who is foreign-born and has not cleared the green card test or any other similar test. Such people need to file Form 1040NR if they do business in the US.

Withholding Tax – What’s the Use?

How it’s Different from TDS?

After reading the above points, you may have got a feeling that withholding tax is the same as the TDS. You are not totally wrong if you think so, as there is a very marginal difference between the two. An employer deducts TDS at the time of making a payment. On the other hand, the employer deducts withholding tax in advance or before making a payment.

In some countries, however, the two terms are the same, but their usage is different. Meaning, TDS applies when dealing with the resident, while withholding tax comes into use for the non-residents.

All US states make use of tax withholding systems to collect taxes from residents and non-residents. These states use a mix of IRS W-4 form and other forms to determine the real tax liability of a person. After collecting the taxes, these states use the proceeds to fund various social security measures.1,2