Net Profit is a measure of profitability of the company after taking into consideration all costs incurred during an accounting period. Other names of net profit are; net income, net earnings, bottom line, profit after tax (commonly known as PAT) etc. 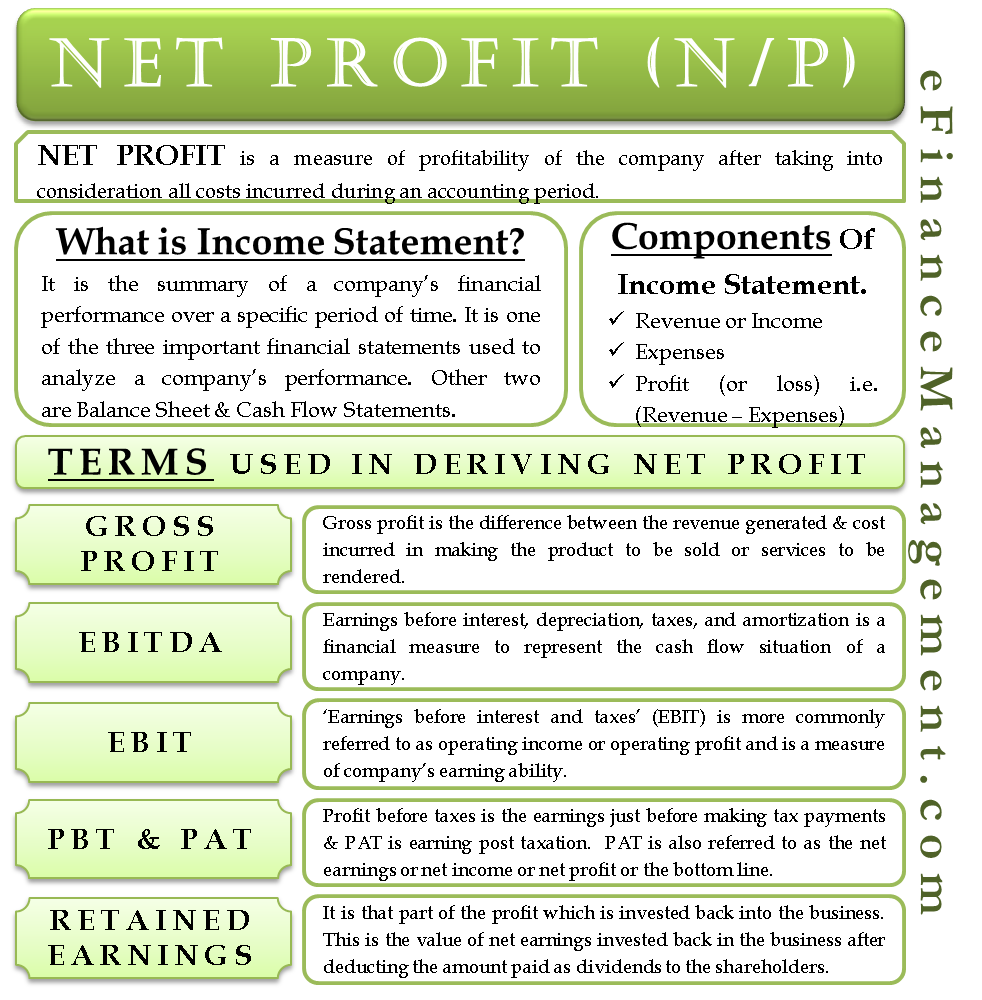 In simple words, it is the money left over after paying off all expenses including cost of goods sold, selling and administrative expenses, operating and non-operating expenses, depreciation, interest payments, preference dividend (if any) and taxes. Net income is reported on the income statement (profit and loss account) and forms a key indicator of a company’s performance. Financial analysts find out net profit margin for their analysis and comparison purposes.

What is an Income Statement?

Components of an Income Statement

An Income Statement comprises 3 parts which are:

Gross profit is the difference between the revenue generated and cost incurred in making the product to be sold or services to be rendered. It is also referred to as sales profit which in our example is $ 600 – $ 275 = $ 325.

Earnings before interest, depreciation, taxes, and amortization is a financial measure to represent the cash flow situation of a company. It is a measure usually used by lenders to ascertain that the company has enough cash flow available to make interest and principal repayments on loans that will be given. It is also used to gauge the short-term liquidity health of the company. A company with a negative EBIDTA may be more worrisome for a lender to give any new credit line too.

‘Earnings before interest and taxes’ (EBIT) is more commonly referred to as operating income or operating profit and is a measure of a company’s earning ability. Operating income is the income generation of the company by its day to day operating activities. It signifies how stable revenue of the company is. A company with a stable EBIT or increasing EBIT is considered favorable even if the profits of the company are fluctuating.

Profit before taxes is the earnings just before making the tax payments. And PAT is the profits after payment of tax. PAT is also referred to as the net earnings or net income or net profit or the bottom line. Net profit is the key number which determines the final profitability of the company. And there are various financial ratios that are linked to net profit for analyzing the performance or year-on-year growth of a company.