How to Calculate EBIT?

There are various ways to calculate EBIT. The most commonly used method is to subtract the cost of the goods sold (COGS) and other direct expenses from the sales. Direct expenses are those that are spent on a regular basis and who have a direct relationship with the company’s core business, like wages.

So, while calculating the Earnings Before Interest & Tax, one-time or extraordinary items, like the cost of a lawsuit or revenue from the sale of an asset, are excluded. Further, the non-operating income, like interest from investment, must also be excluded.

An alternative way to calculate the Earnings Before Interest & Tax is to work back ways. For this method, we take the net income or net profit figure and add back the tax and interest expense. 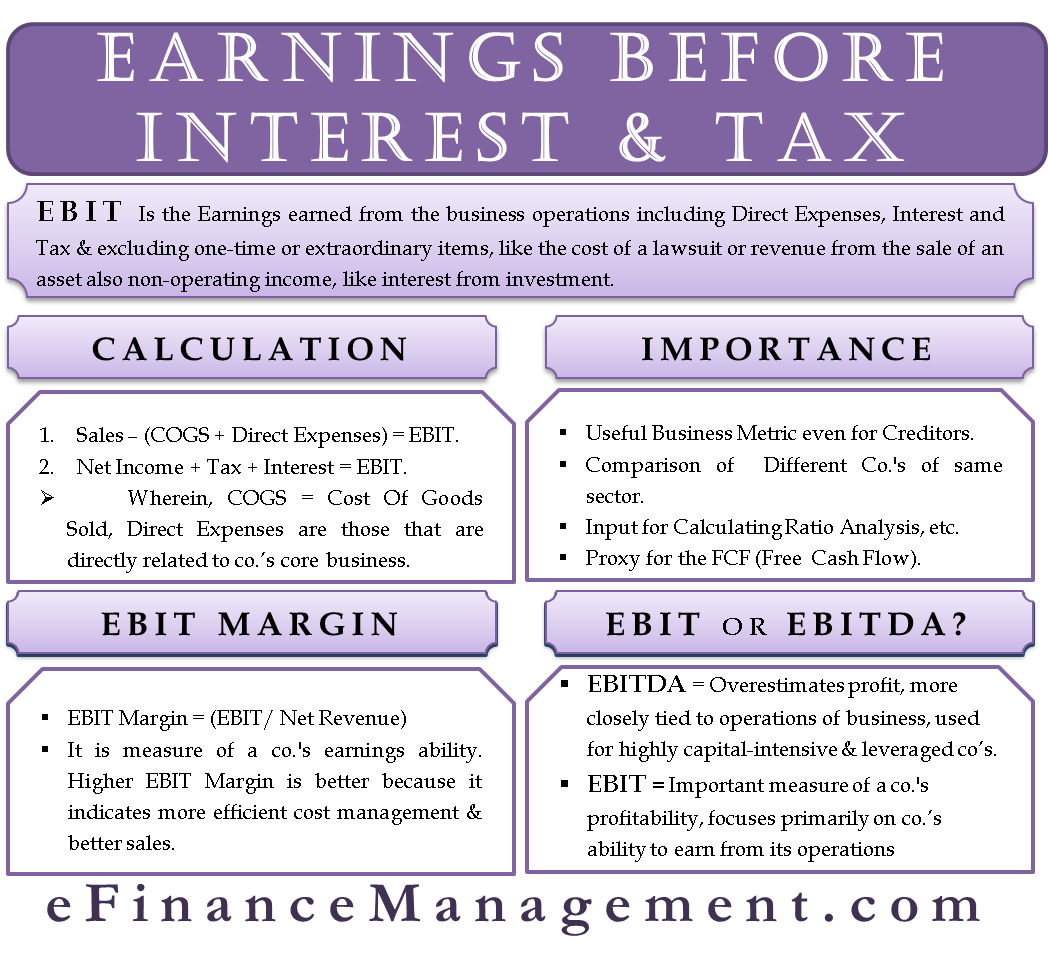 Why is EBIT Important?

EBIT is a useful business metric that comes in handy in several scenarios.

For example, when an investor is buying a company, its earning potential is more important to him than the existing capital structure. Also, Earnings Before Interest & Tax helps an investor or an analyst in comparing different companies in the same sector. Such a comparison indicates if a lower margin of a company is due to the slowdown in the industry or it is specific to the company.

Earnings Before Interest & Tax is also used as an input for calculating other business metrics, like in ratio analysis. Further, creditors also closely monitor the EBIT as it gives them an idea about the pre-tax cash that the company generates to pay the debt and creditors.

EBIT can also be used as a proxy for the FCF (free cash flow) in industries with consistent capital expenditures. FCF is an important input in the valuation of a business.

While comparing companies on the basis of EBIT, a more effective metric is EBIT margin. It is the ratio of Earnings before Interest and Taxes to operating sales or net revenue. Since it is in the form of a ratio or percentage; comparing it with other companies is easier.

It is also a measure of a company’s earnings ability. The higher the EBIT margin, the better it is. A higher margin would indicate more efficient cost management and better sales. If a company fails to generate a positive margin over time, it must rethink its business model and strategy.

One can easily use EBIT margin for cross-industry and international comparisons. However, the margin varies greatly among industries. For instance, the retail industry has a small margin, but a high volume. Other industries may have small volumes, but margins would be high.

Should you use EBIT or EBITDA?

As EBIT, EBITDA (Earnings before Interest, Taxes, Depreciation, and Amortization) is also a crucial measure of a company’s profitability. While the former excludes only interest and taxes for calculating profitability, EBITDA excludes depreciation and amortization as well.

Since EBITDA does not include depreciation, it overestimates the profit of a company. But, we can say that EBITDA is more closely tied to the operations of the business as it removes all non-cash expenses from the operating income.

Deciding which of the two is more important is a tricky question. Both are equally important, and their use often depends on the type of analysis of the company or the purpose of the analysis. For instance, EBITDA usage is usually for highly capital-intensive and leveraged companies. Since these companies have high debt and more fixed assets, it often leads to poor earnings.

So, using EBITDA gives a good idea of the profitability of such companies. Analysts also prefer EBITDA for valuing such companies as negative earnings make things complicated.