Impairment of long-lived assets is one of the key accounting decisions taken by a company. This decision has an impact on the company’s profitability, classification of the cash flows, financial ratios, and various trends. International Financial Reporting Standards (IFRS) and U.S. Generally Accepted Accounting Principles (GAAP) provide guidance on impairment of assets. It is important to understand when an asset is to be impaired and how to treat the impairment.

An asset is impaired when its value in the market is less than its value recorded on the balance sheet of the company. Such a difference, if found to exist for sure, is accounted for in the books. The value of the asset is written down to its current market price. Long-lived assets are generally categorized into three categories. A tangible asset includes property, plant, equipment, etc. An identifiable intangible asset may be a patent, trademark or license. A non-identifiable intangible asset is mostly the goodwill of the company. All these assets are prone to impairments.

The companies need to assess their external environment to figure out whether an asset needs to be impaired. There are several indicators that may lead to an impairment of the asset. Some of the indicators are: 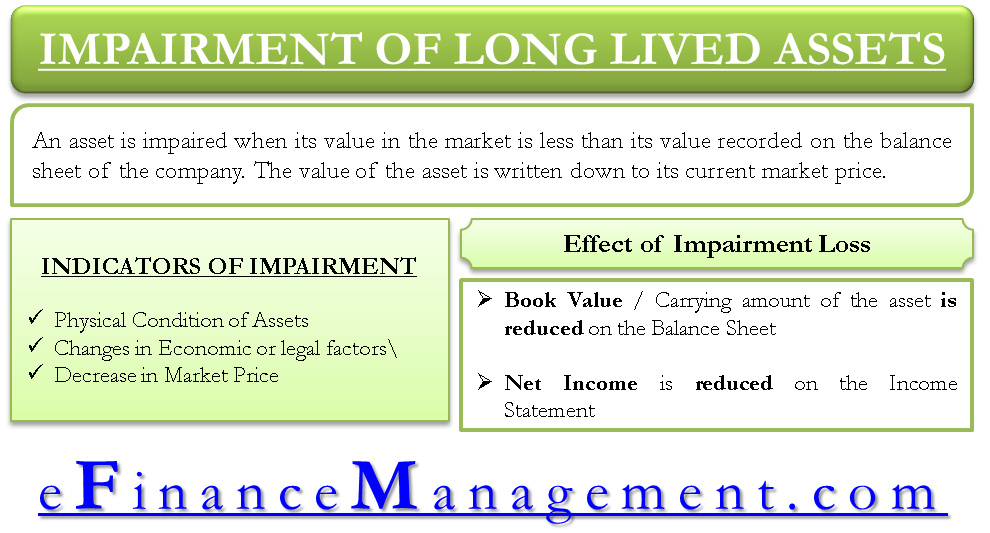 An impairment under IFRS

Under IFRS, IAS 36 is the primary source of guidance on the impairment of tangible assets. The major points covered under this regulation are:

Where Asset’s Recoverable Amount = higher of (Fair value – Selling costs) OR value in use.

The value in use is calculated by discounting future cash flows expected from the continued use of the asset.

An impairment under U.S. GAAP

Impairment loss indicates that the company has overstated its earnings by not recognizing enough depreciation/amortization expense in past. The impairment loss has the following effect on various financial statements and ratios:

Conclusion: The impairment of long-lived assets needs to be determined correctly as it affects the financial statements, the asset turnover ratio and other ratios of the companies. It is advised to figure out the right indicators of the impairment and subsequently, account for the impairments in a regulated way.1