Asset Turnover Ratio can be defined as the value of sales generated for every rupee invested in assets for a given financial year. It works as a measure of a firm’s efficiency.

Total sales figures can be obtained from the income statement. This is the revenue from sales for a given financial year. 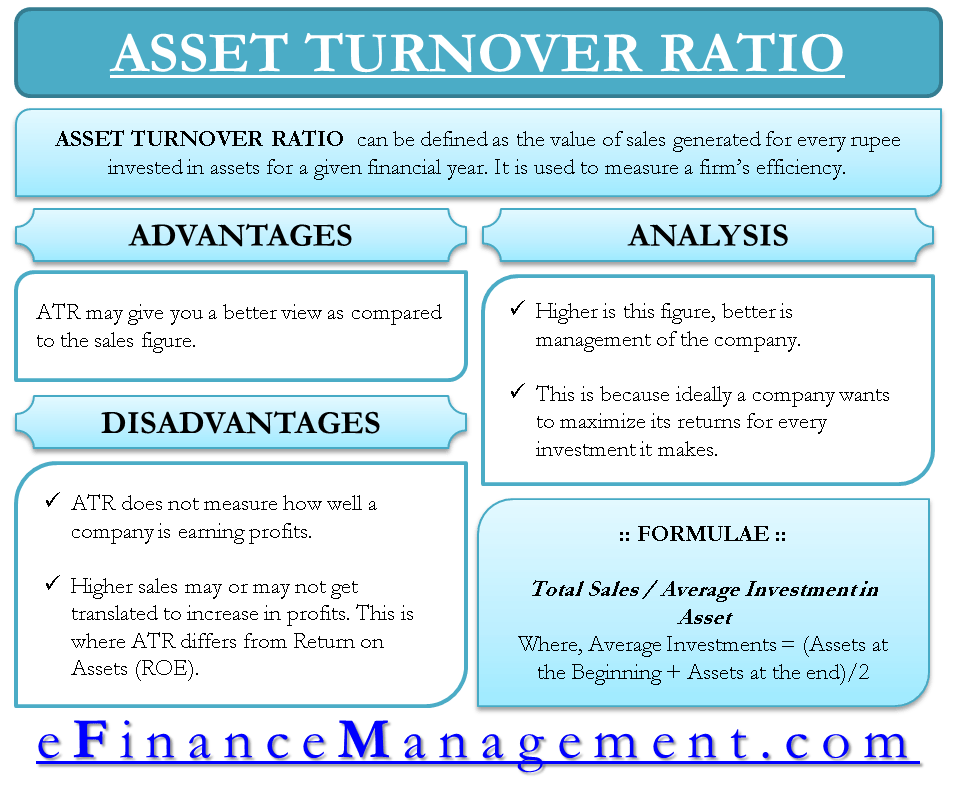 Let us assume a company X. For FY 2010-11, it generated sales of 10 Million. On the other hand, it had assets worth 1 at the beginning of the period. Towards the end of the period, its assets were 2 Million.

From the given information, we can deduce Asset Turnover Ratio as follows:

Assets at the beginning of the period = 1 Million

Assets at the end of the period = 2 Million

Analysis and Interpretation of ATR

This means that, for every $ that the company invests in assets, it generates sales of 6.67. Higher is this figure; the better is the management of the company. This is because, ideally, a company wants to maximize its returns for every investment it makes. If the investment made does not get translated to increase improvement in the top-line and thereby improve the bottom line, there is some problem with the decisions taken by management.

Consider two companies, X and Y, one with an Asset Turnover Ratio of 6.67 and another with an ATR of 3 respectively. Based on these numbers only, company X has made better investment decisions than company Y.

Refer to How to Analyze and Improve Asset Turnover Ratio? for more details.

One of the primitive ratios used to measure a company’s performance is the sales generated. The higher the sales, the better is the company. But this may not give a true picture. Company X may have sales of 10 Million, and Y may have sales of 20 Million. X may have invested 1 Million on assets, and hence its ATR is 10. Y may have invested  5 Million. So, its ATR is 4. Thus, although Y has double the sales, it still may not be as efficient as X because its investment fetches 4 times sales, whereas X’s investment brings 10 times sales. Thus, ATR may give you a better view than the sales figure.

Generally, it is observed that companies with low-profit margins have a higher Asset Turnover Ratio. This is because low-margin companies tend to focus more on volume rather than per-unit profit. Hence, they use their investments more rigorously.

It is always advisable to compare the ATRs of companies within the same sector. Also, ATR on its own may not be a holistic ratio. It must be used in combination with various other ratios to get a better picture of the functioning of a company.