Mortgagee and Mortgagor are the terms that come into use, usually in the context of home financing. Both the terms relate to the parent term ‘Mortgage,’ which means ‘collateral’ or an asset kept as security to get a loan. Often people get confused over what both these terms imply, and thus, use them interchangeably. Therefore, to use the terms correctly and understand their relevance, we need to understand the difference between Mortgagee vs. Mortgagor.

While the term mortgagee comes into use for the person, company, or financial institution that provides finance or loan. Mortgagor, on the other hand, is a person or a company that borrows money from the mortgagee. Mortgagee offers a loan to numerous mortgagors based on their risk profile.

Mortgagor, on the other hand, need to present documents that validate their eligibility for the loan and (or) keep an asset as security to get the loan. Having a secure job or a steady flow of income is just one of the many criteria that a mortgagor needs to have.

To get financial aid, the mortgagor can submit a loan application to various financial institutions and then chose the best interest rates. The mortgagee is the one who decides on the number of years, interest rate, as well as, the down payment that the mortgagor needs to make to avail the loan.

Now you must have got a basic idea of what both the terms mean. To better understand both, let’s see other differences between Mortgagee vs. Mortgagor:

Following are the differences between Mortgagee vs. Mortgagor:

The mortgagee is the giver of a loan. Mortgagor, on the other hand, is the one who takes the loan, keeps assets as collateral, and pays interest and installment.

Agreement of home financing or loan is between the mortgagee and the mortgager. However, the mortgagee decides the term of the funding or loan. If mortgagor chooses to take a loan from a particular mortgagee, he or she needs to abide by the terms of the agreement, such as interest rate, number of years, and so on. Mortgagor, on his part, can decide the amount of loan that he wants (subject to a limit) and also the tenure of the loan. The mortgagor has many choices to avail the loan from, and therefore, could decide on the loan that best suits him or her. 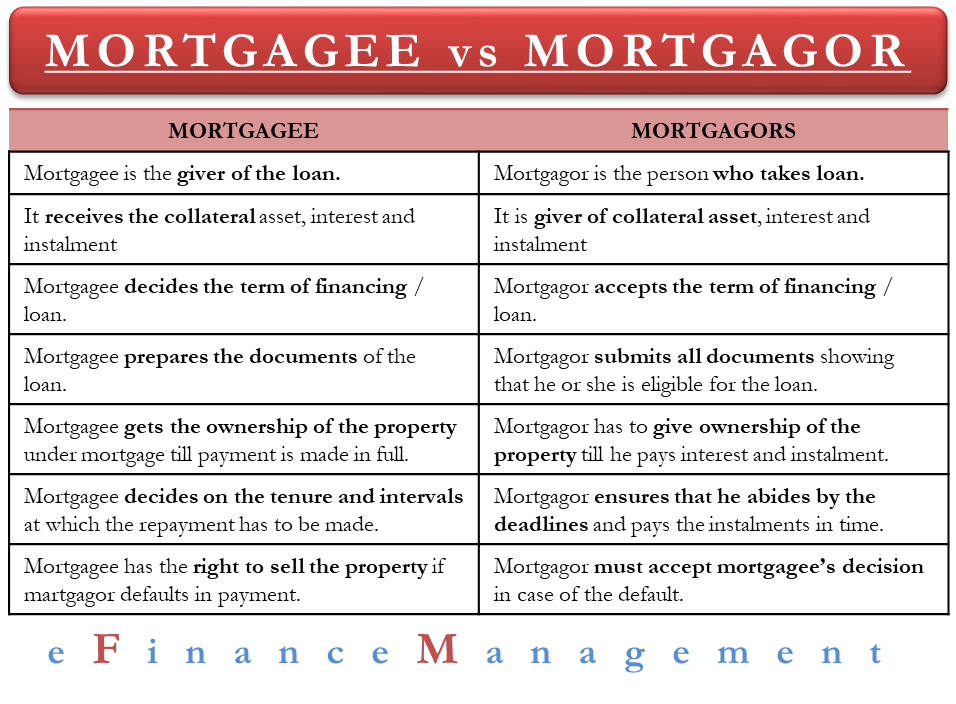 Mortgagor, on the other hand, needs to submit all documents showing that he or she is eligible for the loan. Generally, the documents include proof of identity, proof of address, proof of income, and so on. Only after verification and approval of these documents, the mortgagee decides the amount of loan and interest that the mortgagor is eligible for.

Mortgagee decides on the tenure and intervals at which the repayment has to be made. Mortgagor, on the other hand, ensures that he abides by the deadlines and pays the installments in time.

In case the mortgagor fails to pay the loan installment, the mortgagee has the right to sell the asset kept as mortgage to recover the dues. The mortgagor must accept the mortgagee’s decision in case of the default.

Rights of Both Parties

Mortgagor or mortgagee has certain rights that he or she can exercise. There are three principal rights that the mortgagor has:

On the other hand, the rights of the mortgagee are:

Last updated on : January 17th, 2020
What’s your view on this? Share it in comments below.