An external commercial borrowing (ECB) is an instrument used in India to facilitate Indian companies to raise money outside the country in foreign currency. The government of India permits Indian corporates to raise money via ECB for expansion of existing capacity as well as for fresh investments.

Other such external sources of finance/capital include FCCBs and FCEBs. While foreign currency convertible bonds are issued to raise finance, ECB refers to commercial loans which can be in the form of bank loans, bonds, securitized instruments, buyers’ credit and suppliers credit availed from non-resident lenders with a minimum average maturity of 3 years.

ECB can be availed by either automatic route or by approval route. Under automatic route, the government has permitted some eligibility norms with respect to industry, amounts, end-use etc. If a company passes all the prescribed norms, it can raise money without any prior approval.

For specific pre-specified sectors, the borrowers have to take explicit permission of the government/The Reserve bank of India (RBI) before borrowing through ECB. RBI has issued formal guidelines and circulars specifying these rules for borrowing.

Let us look at the advantages and limitations of ECBs to understand the topic in further detail. 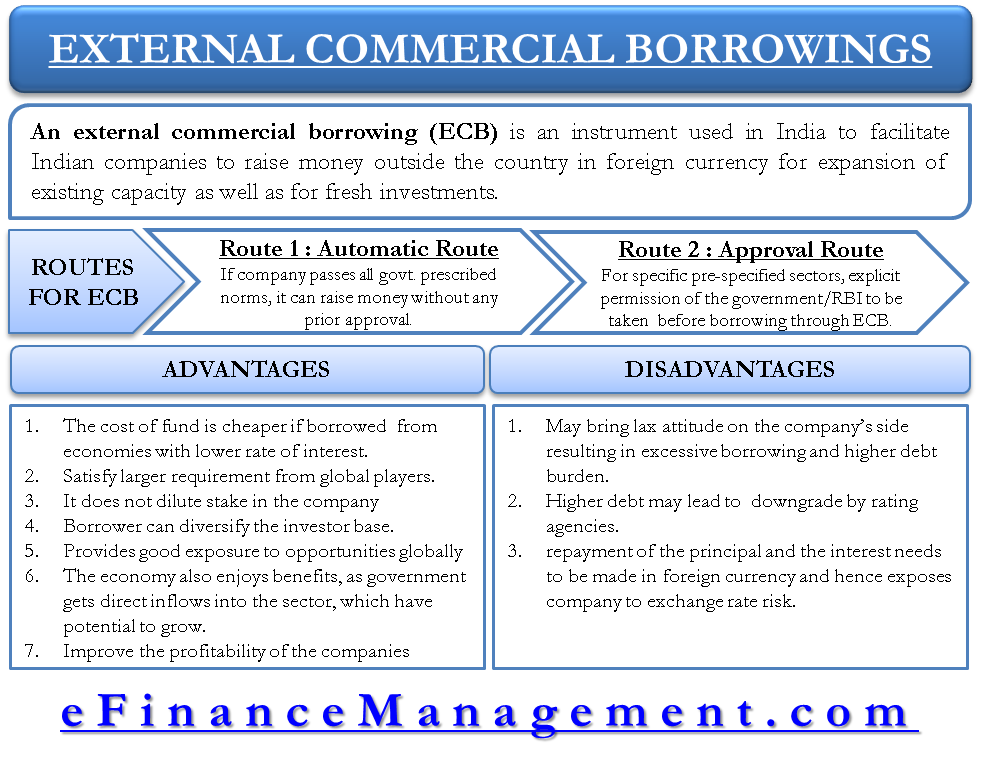 ECB is a very attractive option for companies due to the advantages mentioned above. Although there are some demerits of ECB as given below:

Though external commercial borrowings come at lower costs, it comes with various restriction and guidelines that need to be followed. There exists restriction on the amount and maturity of the ECB. ECBS above $ 20 million need to be of minimum average maturity of 5 years and below $ 20 million should have a minimum average maturity of 3 years. There are restrictions with regards to end use of the funds too. The companies may use it for expansion, but they cannot use it for onward lending, real estate investments, repayment of existing loans and many such limitations. ECBs are one of the commonly availed sources of cheaper funds by eligible companies. However, the companies need to be cautious about the exchange rate risk and impact on balance sheet debt to use it effectively.1