The EBITDA margin is a useful measure of a company’s performance. It evaluates the financial health of a company before considering financial, accounting and tax treatment of different items. EBITDA margin calculates the company’s earnings before interest, tax, depreciation, and amortization as a percentage of the total revenue.

Formula to calculate EBITDA margin is (Earnings before interest and tax + depreciation + amortization) / Total revenue. A lower percentage suggests profitability and cash flow issues with a company. A high number would mean stable earnings for a company. 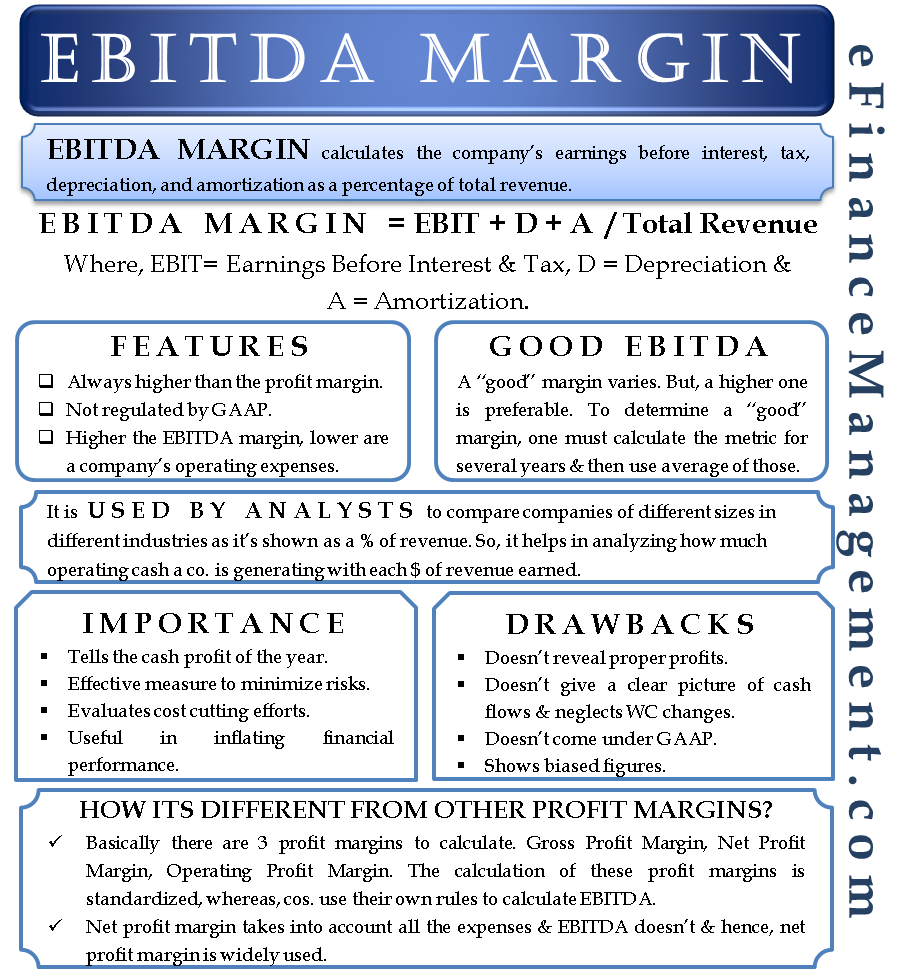 Since EBITDA is the profit before adjusting for interest, taxes, depreciation, and amortization, the EBITDA margin tells the cash profit of a company in a year. It is a more effective measure as it minimizes the effect of non-operating and unique items (like depreciation, amortization recognition, and tax) on the profit.

It is also a useful metric to evaluate the effectiveness of a company’s cost-cutting efforts. The rule is, higher the EBITDA margin, lower are the company’s operating expenses in relation to the revenue.

Suppose Company A has a net profit before taxes and interest of $3 million. Total revenue is $5 million, while depreciation and amortization expenses are $1 million. In this case, the EBITDA margin will be 80%. This means that the remaining 38% of the revenue goes towards operating expenses (excluding amortization and depreciation).

Even though it is a good indicator of a company’s health, it is not mandatory under GAAP. So, it is usually not shown by the companies when they report their financial statements under generally accepted accounting principles.

But, companies with high levels of debt or those investing heavily in equipment prefer the EBITDA margin. Because of high interest and depreciation expenses, their net income is comparatively lower. Therefore, such companies usually use this metric to inflate their financial performance.

What Is a “Good” EBITDA Margin?

A “good” margin will vary depending on the industry. But, a higher percentage is always good as it shows that the company is easily paying its operating expenses. To determine a “good” margin, one must calculate the metric for several years and then use the average of those.

How it Helps Analysts?

It is used by analysts to compare companies of different sizes in different industries because it is shown as a percentage of revenue. So, it helps in analyzing how much operating cash a company is generating with each dollar of revenue earned.

For instance, if a small company has revenue of $100000 and an EBITDA margin of 10%. And, both numbers for a bigger company are $2000000 and 5%, respectively. In this case, it is clear that the smaller firm operates more efficiently, while the bigger firm focuses more on the volume.

Since EBITDA excludes debt, companies often use it to cover up their financial performance. So, a company with high debt must use a metric that includes debt in the calculation. Further, companies with low profitability also rely on the EBITDA margin to window-dress their profitability.

Also, since EBITDA excludes non-cash expenses, capital expenditures, interest on loan and taxes, it fails to give a clear picture of the cash flows. Moreover, a positive EBITDA does not always mean that a company is generating cash. A positive EBITDA could be because it ignores an important factor – changes in working capital.

Another drawback is that it does not come under GAAP. So, companies are free to use their discretion in calculating EBITDA, often resulting in biased numbers.

To overcome such drawbacks, an analyst must use other metrics as well to evaluate a company. Using it in conjunction with other leverage and profitability ratios and calculating Free Cash Flow (FCF) would give a better picture.

How is it Different from Other Profit Margins?

Under GAAP, a profit margin uses either of three – net profit margin, gross profit margin, or operating profit margin. The calculation of these profit margins is standardized, thus making comparisons with previous years and rivals easier. On the other hand, companies use their own rules to calculate EBITDA.

The net profit margin is the most used GAAP metric to evaluate the profitability of a company. It takes into account all operating and non-operating expense. Since it is regulated under GAAP; companies follow a defined method for its calculation. And, thus it is widely used.

However, on paper, the EBITDA margin is better than the net income margin (net income/revenue) because it minimizes the non-operating effects, which are unique to each company. This, in turn, allows investors to focus solely on the operating performance of a company.

Last updated on : January 5th, 2019
What’s your view on this? Share it in comments below.
Pin It Tweet