Usually a debt or loan is secured against collateral say ‘home’ in a home loan. Collateral is an asset that for which the loan is given. In case the borrower defaults, the lender or the bank has the right to recover the money from the collateral asset. The lender might or might not be able to recover his money fully with the collateral.

Under the situation of default:

Mr. John, who took recourse debt: Apart from the home (i.e. the collateral in this case), he is also liable to pay the debt with his personal assets.

Mr. Donald, who took non-recourse debt: The home (i.e. the collateral in this case) will be taken over by the lender, but he is not liable to pay the debt with his personal assets. 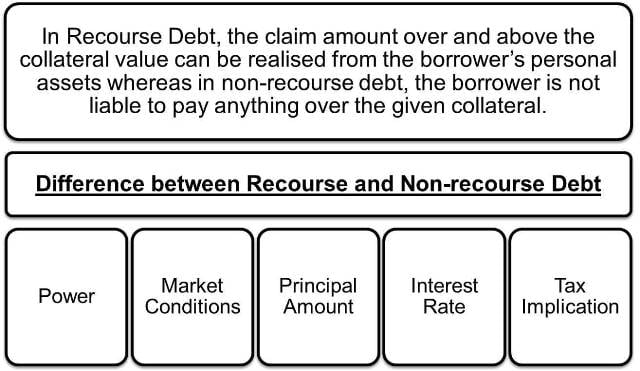 In other words, in Recourse Debt, the claim amount over and above the collateral value can be realised from the borrower’s personal assets whereas in non-recourse debt, the borrower is not liable to pay anything over the given collateral.

Difference between Recourse and Nonrecourse Debt