For the benefit of the reader, LIBOR is the average interest rate that the banks globally use to lend and borrow money from each other. Financial institutions around the globe use LIBOR as a benchmark to set various interest rates for lending money to various parties, banks, industries, governments, and so on.

Because of the parameters used, TED spread is a good indicator of the perceived economic risk, monetary liquidity, credit risk in the banking system globally. Thus, it is a go-to measure if we want to get an idea of prevailing investment risk.

TED Spread – How to Calculate?

Initially, the TED spread was the difference between the 3-month Treasury bills and the 3-month Eurodollar contracts with the same expiration. The term TED is a combination of the “Treasuries” and “Eurodollars,” whose ticker symbol is ED. However, after CME (Chicago Mercantile Exchange) got rid of the Treasury bills futures, following the 1987 stock market crash, there was a change, and LIBOR is now used for calculation.

We measure TED spread in basis points or bps, where a spread of 100 bps equals to a difference of 1%. To calculate TED spread, one needs to subtract the 3-month T-bill yield from the 3-month LIBOR rate.

As a general rule, a spread of less than 0.50 is seen as low, indicating that the financial markets perceive a small financial risk. On the other hand, a spread of over 1.0 suggests greater uncertainty and some amount of risk in the banking system globally. 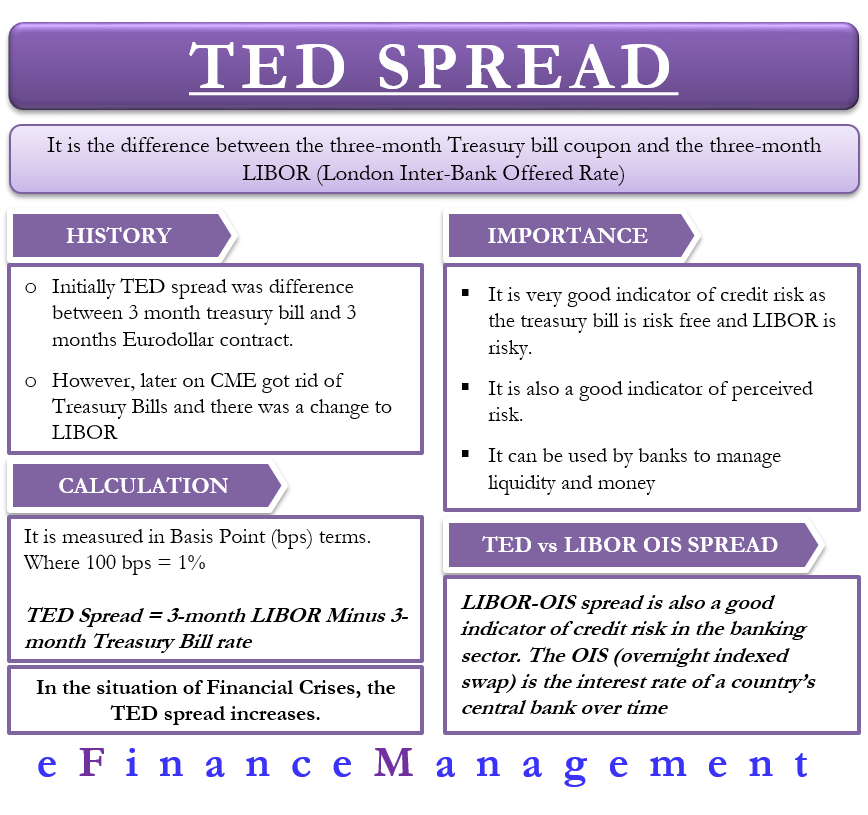 As told above, the TED spread is a very good indicator of credit risk. Because the Treasury bills rate is the “risk-free” rate, whereas LIBOR incorporates the credit risk that banks take when lending money to other banks, one can easily determine a perceived risk by comparing a risk-free rate to any other rate. Thus, the difference between the two (T-Bill and LIBOR) is a good indicator of the movements in the credit risk perception.

It is a good indicator of the perceived risk as well. With the increase in the spread, investors believe the credit risk, as well as, the default risk rises as banks charge more premium from each other on the short term loans.

Also, if an economy is experiencing a downturn, a bank may feel that some banks may face liquidity issues. However, since they don’t know which bank is facing issues, they limit their interbank lending, leading to an increase in the spread. This eventually means lower liquidity and less money available for consumers and corporate. In such a case, investors can switch to safe, risk-free investments, such as Treasuries. On the other hand, if the spread narrows, it means the default risk is dropping as well.

Therefore, in times of financial crisis, the TED spread can increase. For instance, during the 2008 crisis, the spread increased to 150-200 bps. At the peak of the crisis, in 2008, the spread went above the 300 bps, breaking the previous record at the time of the Black Monday crash of 1987.

Before the crisis, the spread was in the range between 20 to 60 basis points. Similarly, after the crisis in the year 2010, the spread came back to its long-term average of 30 basis points and even hit the low of 11 bps in March. However, following the Greek debt crisis and concerns over the financial health of the eurozone, the spread started rising again and reached 45 bps by June.

LIBOR-OIS spread is also a good indicator of credit risk in the banking sector. The OIS (overnight indexed swap) is the interest rate of a country’s central bank over time, for instance, the Federal funds rate for the US. Thus, OIS includes very minimal credit risk. Like the TED spread, the LIBOR-OIS spread (the difference between LIBOR and OIS) also indicate the health of the banking system and credit risk.1–4