Most of the organizations keep this as a three-digit code and assign these to the accounts such as assets, supplies expense, revenue and so on.

For instance, a multi-division company would have the chart accounts numbering in the following manner – zz-aa-123. The zz representing division, aa for department and 123 for accounts. If the company is a single division with multiple departments, then the number pattern could be something like zz-yyy. Finally, a small business with no departments at all could have only a three-digit code assigned to its accounts such as yyy.

What Should be the Code?

The code depends on the complexity of the business and the details that the accounting manager wants from the financial reporting system. These codes are usually numeric but could be an alphanumeric as well. There is no strict rule on the code pattern, but usually, the numeric codes work best because of the simplicity to feed it in the normal keyboard.

After setting the coding pattern, the companies move on assigning the numbers to the division, department, and accounts. 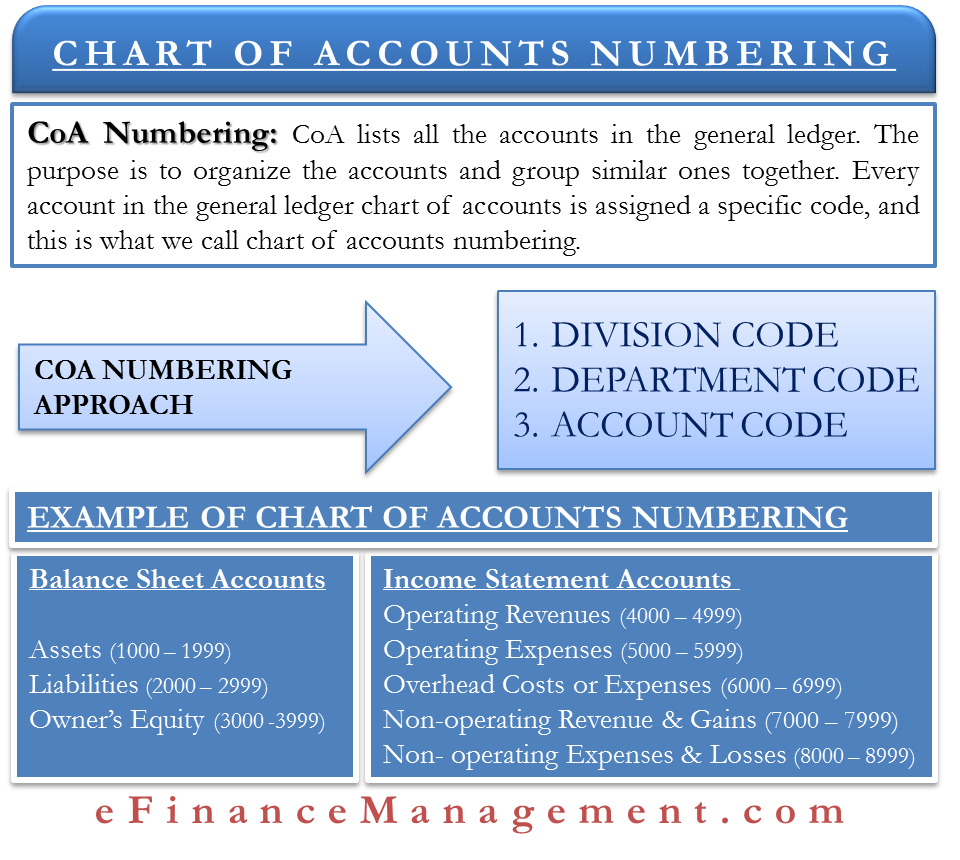 Accounts and Their Numbers

Assets – Assets usually fall into two categories – current assets and fixed assets. One can easily convert current assets into cash, such as checking accounts, money market, savings account, account receivables, inventory and so on. Current assets normally get the codes from 1000 to 1499, but again there are no hard rules for the same. Fixed assets, on the other hand, get codes from 1500 to 1999.

Liabilities – Any funds that the company owns to the outside parties are the liabilities. There are various types of liabilities such as current liabilities, non-current liabilities and more. For instance, every organization has a payroll liability that tracks the taxes deducted from employee’s paychecks and holds until it is paid to the Government. Such liabilities include local taxes, federal and state income and the employee-paid portion of taxes such as Social Security and Medicare

Income – It is the revenue that the company generates from day-to-day operations such as professional fees, products sold, and reimbursable expenses and so on.

Expenses or Overhead cost – Overhead costs or fixed costs are the expenses that the company needs to pay even if it is not producing anything. For example telephone, insurance, utilities and so on.

Apart from these, other types of accounts include Other Expenses, Other Income and so on.

Example of Chart of Accounts Numbering

Following is an example of a typical Chart of Accounts. The example also includes the usual number ranges of each head.

Last updated on : October 2nd, 2019
What’s your view on this? Share it in comments below.