A PIK loan or payment-in-kind (PIK) loan is one where the payment of interest is not in cash.  In this loan, there is no cash flow from the borrower to the lender from the time loan starts till the maturity date. The borrower pays the interest on such loans by issuing additional securities or additional debt instruments. Also, one also has the option to add interest to the principal amount.

Interest on such loans is higher than usual to make this financing instrument attractive for the lender. Because of this, such loans are pretty expensive and risky as well.

Interest payment in such loans as the name suggests is made in kind or in a deferred manner. The borrower can issue more securities in lieu of paying interest in cash or can even issue stock options or warrants. There is also an option to capitalize the interest and add it to the principal at the end of each period.

On maturity, the borrower pays the principal amount and interest accrued or exercises any notes or warrants that were issued in lieu of the interest. 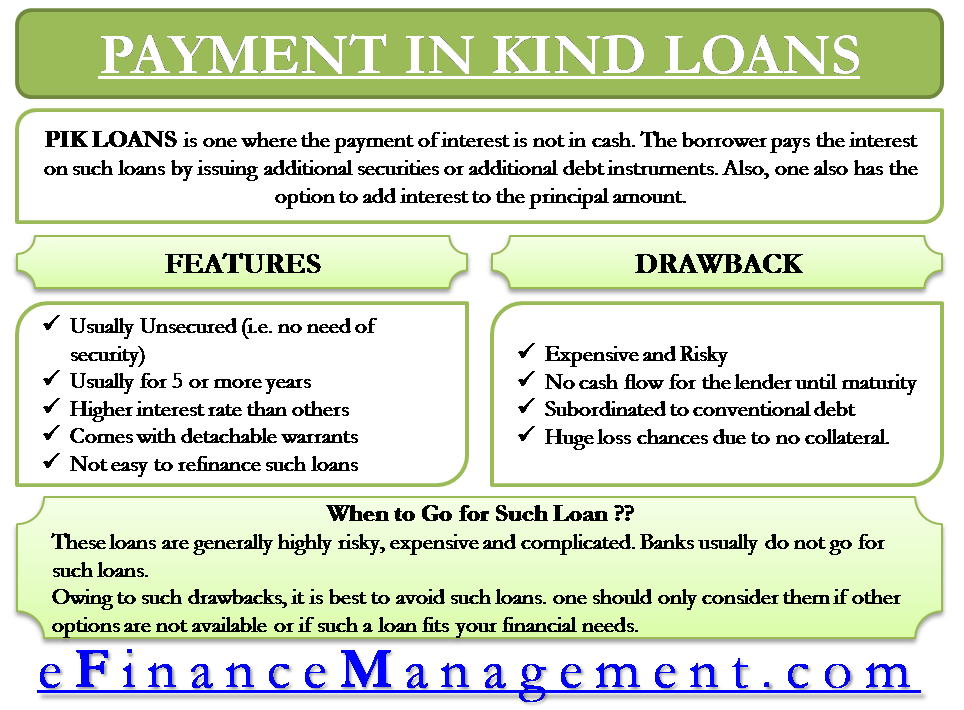 Since the PIK loan is high risk and expensive, a lender must get significant benefits for such instruments. As there is no interest payment in cash, lenders derive profits from the arrangement fees, payment in kind during the term of the loan and from the warrant.  A warrant gives the lender a right to purchase a set number of share and at a set price.

The arrangement fee is usually payable up-front and primarily covers the administrative costs of the PIK loan. Biggest profit for the lender comes from the selling price of the shares, which the lender gets from exercising the warrant.

It is an interest payment option under the PIK loan. Such an option allow the borrower to make some part of the interest payment (when it is due) in cash and remaining in kind. The borrower can either pay in stock instead of making cash payment. When borrower toggles the loan in this way, lenders can also exercise an option to raise the interest rate significantly. In all, PIK loan toggles support a highly variable rate of payment where both parties can change loan terms midway.

Similar to a PIK loan, Mezzanine lenders may also PIK (payment in kind) some part of interest and add it to the principal amount. Further, Mezzanine debt may also include warrants.

When To Go For Such A Loan?

A PIK loan is risky, expensive and complicated. Banks usually don’t offer such loans. So, you will have to depend on the third party lenders, who may ask for equity in your business in return for such a loan.

Owing to such drawbacks, it is best to avoid such loans. And, one should only consider them if other options are not available or if such a loan fits your financial needs. For instance, some firms (usually startups) will need investor funds to grow their balance sheet, and then use it to take on bigger debts. Such companies can use PIK loans to better their operations and earn more revenue, and then apply for bigger loans.

Additionally, such loans suit companies that have a liquidity issue but are capable of making an interest payment in kind. For instance, it is an attractive option for companies during a management or leveraged buyout. Also, companies in the growth phase may want to delay paying interest and invest the money in the business itself.