An Intercreditor Agreement (or inter-creditor deed) is a contract between two more creditors. Such an agreement comes into effect when the borrower has two (or more) lenders. The lenders sign a contract among themselves stipulating all the needed points. The contract includes details like dispute resolution, various lien positions, responsibilities of the creditors, liabilities of each creditor, impact on the other creditors, etc.

Usually, there are two creditors in an inter-creditor agreement – one senior and the other subordinate or junior lender. For example, Company A takes a loan from Bank A for a big project. Later, Company A also takes a relatively smaller loan from Bank B for further expansion of the same project. In this case, Bank A is the senior lender and Bank B is the junior lender. 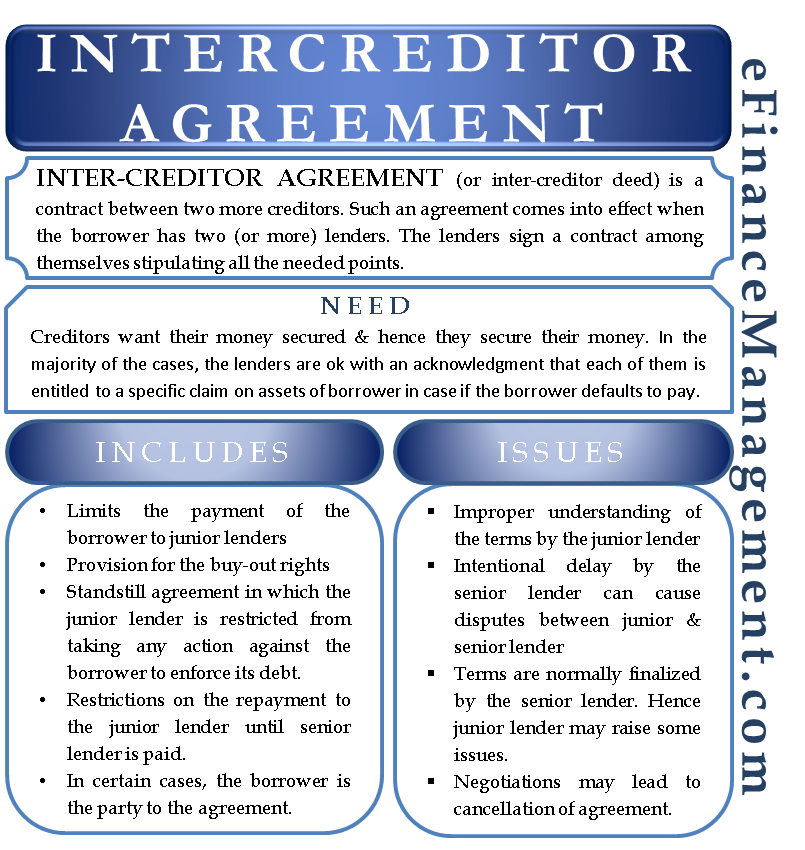 Lenders have to establish the right to the loan and the security in case of the borrower has more than one lender for the same loan and security. In the majority of the cases, the lenders are ok with an acknowledgment that each of them is entitled to a specific claim on the assets of the borrower.

But, in the case where there is a senior/junior lender thing, the lenders enter into an inter-creditor agreement. Such an agreement helps them define their respective rights.

Such an agreement plays a vital role in the right to lien. Thus, the agreement is important to all the lenders as it lays the foundation for the rights and priorities in case the borrower is unable to pay properly or defaults.

If one doesn’t enter into such an agreement, each lender will proceed in its own way. Such a process could prove uneconomical and at the same time, turn into a legal mess.

Intercreditor Agreement – What it Includes?

Such an agreement also includes provision for the buy-out rights. This right allows a lender to buy the other lenders claims and liens. Such an option triggers after specified events, like filing of a bankruptcy case.

Another provision in the inter-creditor agreement could be Standstill. Under this, the junior lender is restricted from taking any action against the borrower to enforce its debt. Usually, the restriction to take any action (demanding the payment, taking legal action, etc.) is for a specific period. Also, the standstill period continues until the commencement of the enforcement proceedings from the senior lender. Sometimes, period stretches up to the full repayment of the senior debt.

The agreement could also include restrictions on the repayment. A junior lender could agree that until the senior debt is repaid in full, it would not ask for any repayment, except for the interest or any other payment as agreed upon.

Usually, a senior lender dictates the term of the agreement. So, if the junior lender fails to negotiate properly, it may be at a disadvantage.

The junior lender must try to put a clause of it taking over the project in case of the default. To make the maximum of it, it will have two options. First, to re-finance the borrower to ensure the project continues, and second, to repay the senior lender in full. The second option could prove impossible if the senior lender has given a big amount of loan.

Last updated on : December 11th, 2018
What’s your view on this? Share it in comments below.
Pin It Tweet