Home
Investment Decisions
Yield Curve – What It Is And Why It Is So Important?

The most commonly used yield curve compare three-month, two-year, five-year, 10-year and 30-year U.S. Treasury debt. It serves as a benchmark for other interest rates, like bank rates, mortgage rates and more. The information on the yield curve rates is easily available on Treasury’s interest rate websites on a daily basis.

There are three types of yield curves shapes:

In a normal shaped yield curve, bonds with longer maturity have a higher yield compared to the shorter-term bonds. This difference is due to the time -related risk. A normal shaped is usually an indication of economic expansion.

In an inverted shaped yield curve, short-term yields are more than the long-term yields. It can be a sign of an upcoming recession. A Duke University professor in the 1990s found the development of inverted yield curves before the last five U.S. recessions.

In this type of yield curve, the short and long-term yields are close to each other. It usually serves as an indication of economic transition. When an economy is moving from expansion to slower development or even recession, yields on longer-maturity bonds fall while yields on short-term securities likely go up. This results in a normal yield curve forming into a flat one. 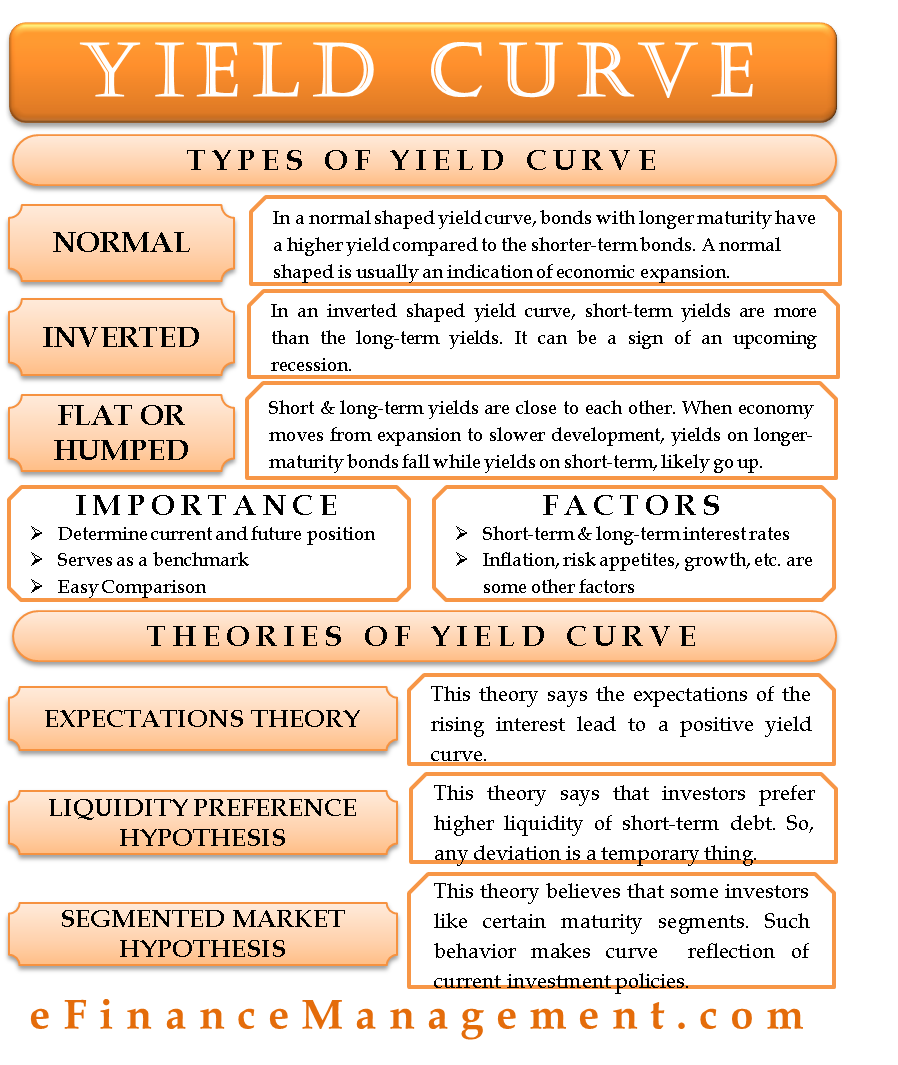 Theories behind the Shape of the Yield Curve

There are mainly three theories that try to explain the logic behind the shape of the yield curves:

This theory says the expectations of the rising interest lead to a positive yield curve.

This theory says that investors prefer higher liquidity of short-term debt. So, any deviation from a normal curve is only a temporary thing.

This theory believes that certain investors have a liking for certain maturity segments. Such a behavior makes the curve a reflection of the current investment policies.

Yields on the Treasury bonds are usually among the lowest as they are risk-free. This helps bond investors to compare the Treasury yield curve with other riskier assets, like corporate bonds. The yield difference between the two is called “spread.” A general rule of thumb is closer the yields, the more confident the investors are on the other bond. Also, spread usually widens during recessions and contracts during an economic recovery.

Different factors impact the movement on either end of the yield curves. Short-term interest rates – or “the short end” of the yield curve – are influenced by the expectations for the U.S. Federal Reserve policy, or in general what the government will do in the future. When the Fed is expected to raise the interest rate, the short-term rates rise, while the rates drop when a cut in expected.

Long-term bonds – or the “long end” of the curve – are also to some extent affected by the Fed policy expectations. Other factors, however, also play a role in the movement of the long-term yields. Such factors are the outlook for economic growth, inflation, supply-and-demand and investor’s overall attitudes towards risk.

How to Benefit from It?

The shape of the yield curves offers investors an insight into the short-term interest rates and economic growth. Though they are not a sure shot, they can offer guidance when properly used. Also, it must be noted that yield curves are more helpful to short-term investors. A long-term approach for a bond investor must always be based on specific objectives, instead of technical indicators like the yield curve.

Short-term investors can make a profit by reading the shape of the curve and then adjusting their positions based on that. However, predicting how the yield curve may change is a very difficult task.

Last updated on : November 19th, 2018
What’s your view on this? Share it in comments below.
Pin It Tweet