Home
Financial Accounting
GAAP vs IFRS – All You Need To Know

Initially, many countries developed their own accounting standards. All these standards were different from others in a way that each had a different approach, such as tax-oriented, principle-based, business-oriented, rules-based and more. However, with the globalization, the need was felt to unify all different standards. After the 90’s, there were two dominant standards – the GAAP and IFRS. Although similar in most areas, there are a few differences between GAAP vs IFRS.

GAAP is primarily in use in the United States and has a different set of rules and regulations than IFRS. International Financial Reporting Standard, on the other hand, is followed by over 110 countries and, thus, has a global appeal. Companies that expand internationally prefer to keep their books as per IFRS. This makes it easier for the organization and the stakeholders to understand and compare the financial statements.

A major difference between GAAP vs. IFRS is that the latter is principle-based whereas GAAP is rule-based. The principle-based approach opens the window for different interpretations of similar transactions. This gives the organizations some leeway but requires extensive disclosure. IFRS, however, also has guidelines that can be considered more like a set of rules rather than a set of principles.

Further, both GAAP and IFRS differ in methodology for the treatment of accounting items. GAAP is more inclined towards the literature, whereas in IFRS, reviewing of facts pattern is more thorough.

GAAP prefers the use of the LIFO (Last In First Out) method for estimating inventory. IFRS, however, does not approve this method as LIFO does not reveal the actual flow of inventory in most cases, resulting in unusually low-income levels.

As per the GAAP, a company should show fixed asset at its cost, net of any accumulated depreciation. Under IFRS, a company can revalue fixed assets. Therefore, the value on the balance sheet increases. Although IFRS approach makes more sense in theoretical terms, it also requires more accounting efforts to calculate.

Under GAAP, intangible assets – such as research and development or advertising costs – are recognized at the fair market value. However, IFRS takes into consideration the future economic benefit of the intangible asset when assessing its value. 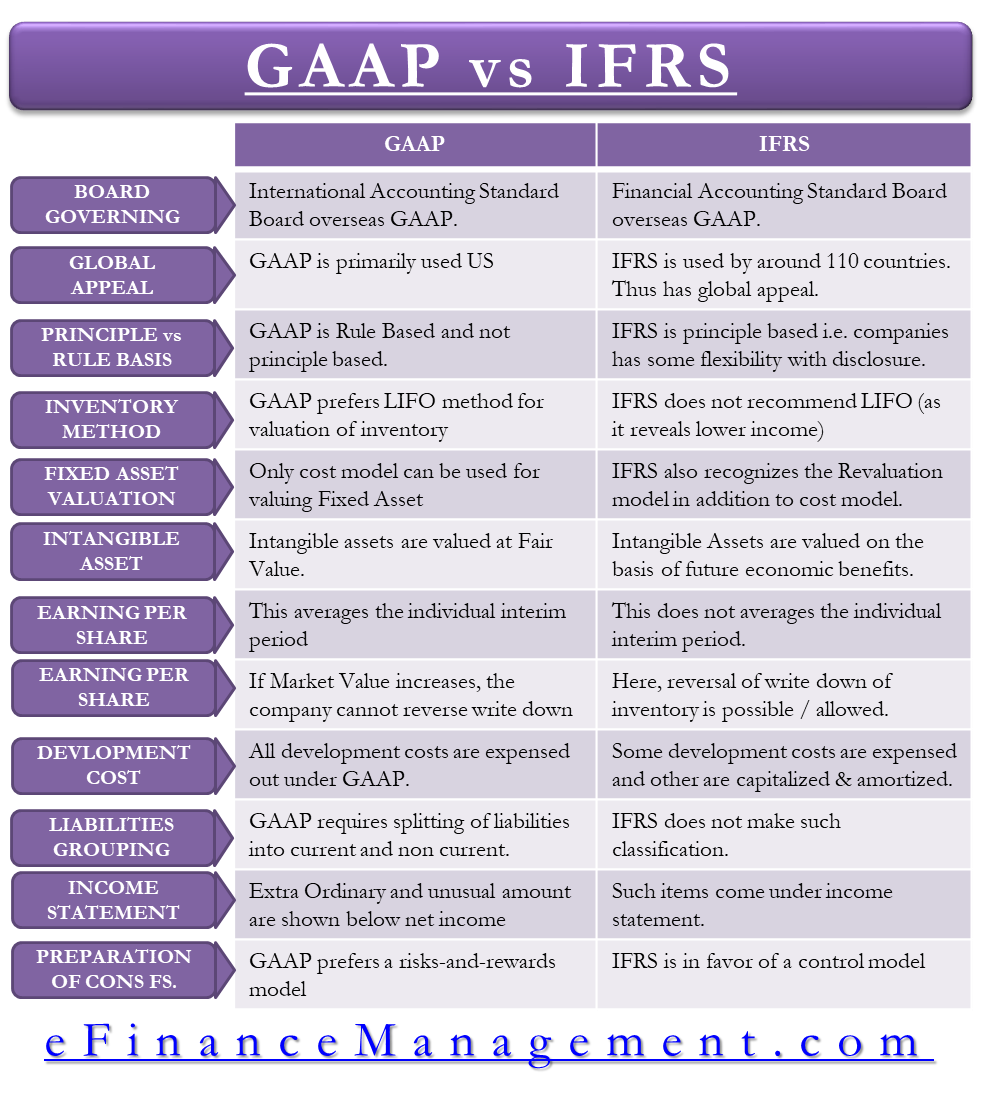 One major difference between GAAP vs. IFRS is the inventory write-down reversal treatment. Under GAAP, if the market value of an asset increases, the company can’t reverse the amount of write-down. On the other hand, under IFRS, a company can reverse the amount of write-down. We can say that GAAP is conservative when it comes to the inventory reversal and refrains from reflecting any positive changes in the marketplace.

Under GAAP, the company charges all the development costs to expenses as and when the company incurs it. IFRS, however, allows some of these costs to be capitalized and amortized over multiple periods. GAAP’s treatment might be conservative, while IFRS treatment might be too aggressive in allowing deferment of costs that should have been charged to the expenses at the time when they are incurred.

GAAP prefers a risks-and-rewards model, while IFRS is in favor of a control model. Therefore, business entities that may be consolidated under GAAP, may be shown separately under IFRS.

Both GAAP and IFRS have been running for decades. Therefore, it is no surprise that experts are in discussion to converge the guidelines and principles of two, making it simpler for the world to understand and follow the basic set of guidelines. This work towards convergence is ongoing for the past many years and still requires a lot of effort as is evident from the differences above.

Some experts, however, are not in favor of the convergence to make a universal rule. They are of the view that both GAAP and IFRS should focus on improving their own standards rather than worrying about convergence.1–3

Last updated on : October 29th, 2019
What’s your view on this? Share it in comments below.
Pin It Tweet