Most businesses sell their goods and services on credit. However, not all customers end up paying the money they owe to a company. Though companies take measures to recover the money, some money may still remain uncollectible. In accounting terms, this uncollectible part is the bad debt. And, one way to account for such uncollectible accounts is Allowance for Doubtful Accounts.

Allowance for Doubtful Accounts is a reduction in the total amount of accounts receivable given in the company’s balance sheet. Such an allowance is actually an estimate from the management of the accounts receivables that it doesn’t expect to receive. In case, there is a difference between the actual and the management expectations, the company adjusts its estimation methodology to align the estimates with the actual results.

When a company records the allowance for doubtful accounts, it simultaneously records a sale. In simpler terms, the company is matching its estimate for the bad debt expense against the sale in the same period. This helps in developing an accurate understanding of the profitability of a sale.

A company using accrual method of Accounting will record the allowance for the doubtful debts. This helps in ascertaining the future bad debts, and thus, enhance the accuracy of the company’s financial statements. Usually, companies mention these deductions right below the accounts receivables line item. In the balance sheet, such an item qualify as a contra asset account.

The only impact of this item on the income statement is that the initial charge to bad debt expense is shown when a company initially funds allowance. Thereafter, any write-offs of accounts receivables against the allowance for doubtful accounts impacts the balance sheet.

A company has a debit balance of $120,000 in the Accounts Receivables for selling goods on credit. First, the company deploys the aging method to identify that $20,000 of the receivable have crossed 100-days due date. Further, they scrutinize and identify that roughly $10,000 of these receivables would never be recovered. Therefore, the allowance for doubtful accounts should have credit balance of $10,000. In case, the current balance is $0, the journal entry would show he debit of $10,000 to bad debts expense and a credit of $10,000 to allowance for the doubtful accounts.

The balance sheet will now report Accounts Receivable of $120,000 less the Allowance for Doubtful Accounts of $10,000, for a net amount of $110,500. The income statement for the accounting period will report bad debts expense of $10,000. 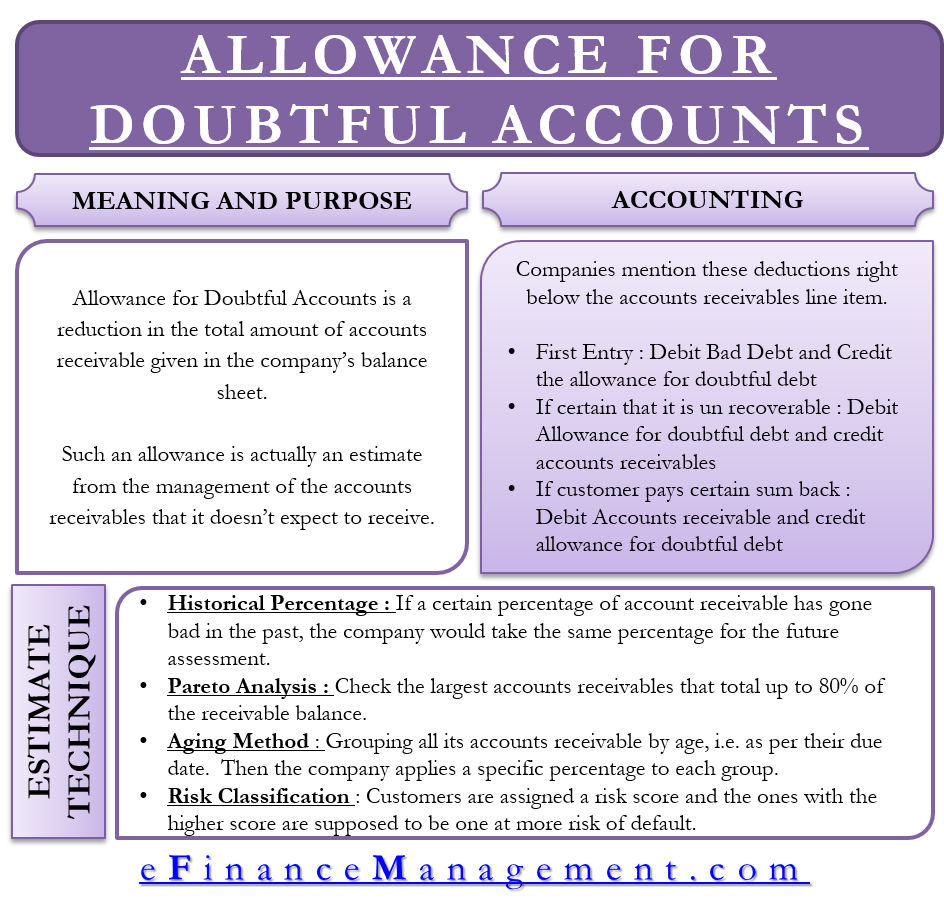 There are several ways to estimate the allowance for doubtful accounts, which are:

The management uses historical percentage for assessing the bad accounts in the future. For instance, if a certain percentage of account receivable has gone bad in the past, the company would take the same percentage for the future assessment as well. For example, on the basis of past data, a company founds that on an average 3% of the total sales go bad each year. Then, if the sale is $100,000 then the allowance would be $3000.

Companies that adopt this option will check the largest accounts receivables that total up to 80% of the receivable balance. This helps them to zero in on the customers who are more important than the rest. Thereafter, the company uses the historical percentage method for smaller accounts. Generally, companies who have a few big accounts go for this method.

Customers are assigned a risk score and the ones with the higher score are supposed to be one at more risk of default.

Direct Write off Method Vs Allowance for Doubtful Accounts

Some companies prefer direct write off method than making an allowance for doubtful accounts for accounting for bad debts. Under this method, the companies decide that they do not have any option of recovering the amount. This usually happens when none of the recovery attempts work.

Writing off the debt means the companies debiting the bad debt expenses and crediting the accounts receivables account. The IRS guidelines prefer the write-off method, but it does not conform to the GAAP (Generally Accepted Accounting Principles).

Generally, companies prefer this method for small accounts that do not impact financial records significantly. Also, this method is simple and helps with the tax as well. One drawback of this method is that the balance sheet does not give an exact representation of the company’s account receivable. Moreover, it can also encourage expense manipulation as a company records expense and revenue in different periods.

Allowance for doubtful debt, on the other hand, gives an accurate matching of the financial records as it adheres to the matching principle. Unlike the direct write off method, the balance sheet here provides an accurate record of the expenses. Under this, the companies don’t immediately write-off the accounts, rather, it first estimates the bad debt amount.

One possible drawback of this method is that management might make a wrong estimation of the allowance. This could misstate the net income. To overcome this, management must review the allowance for doubtful accounts monthly to ensure that it is not over or understated.

Last updated on : August 2nd, 2019
What’s your view on this? Share it in comments below.