Value at risk (also VAR or VaR) is the statistical measure of risk.  It quantifies the value of risk to give a maximum possible loss for a company or a stock or a portfolio. VAR, which was developed in the late 90s by JPMorgan, uses price movements, historical data on risk, and volatility for calculation.

We can say that this measure gives the potential loss for any type of investment over a time period. Basically, it gives the probability of losing a given amount for any investment. VAR usually has three elements – an estimate of the loss, a time period and a confidence level.

Who Uses It and Why?

Risk managers usually use this to measure the risk, and then take appropriate actions to bring the risk below the acceptable limit. Also, banks and other financial institutions use it to ascertain the extent and occurrence ratio of losses they could incur.

To banks and other financial institutions, this helps to ensure if they have enough capital reserves to cover the losses. Or, if they need to reduce concentrated holdings to take on higher-than-acceptable risks.

Following are the advantage of value at risk:

Even though VAR is a pretty useful statistical technique, it suffers from a few drawbacks: 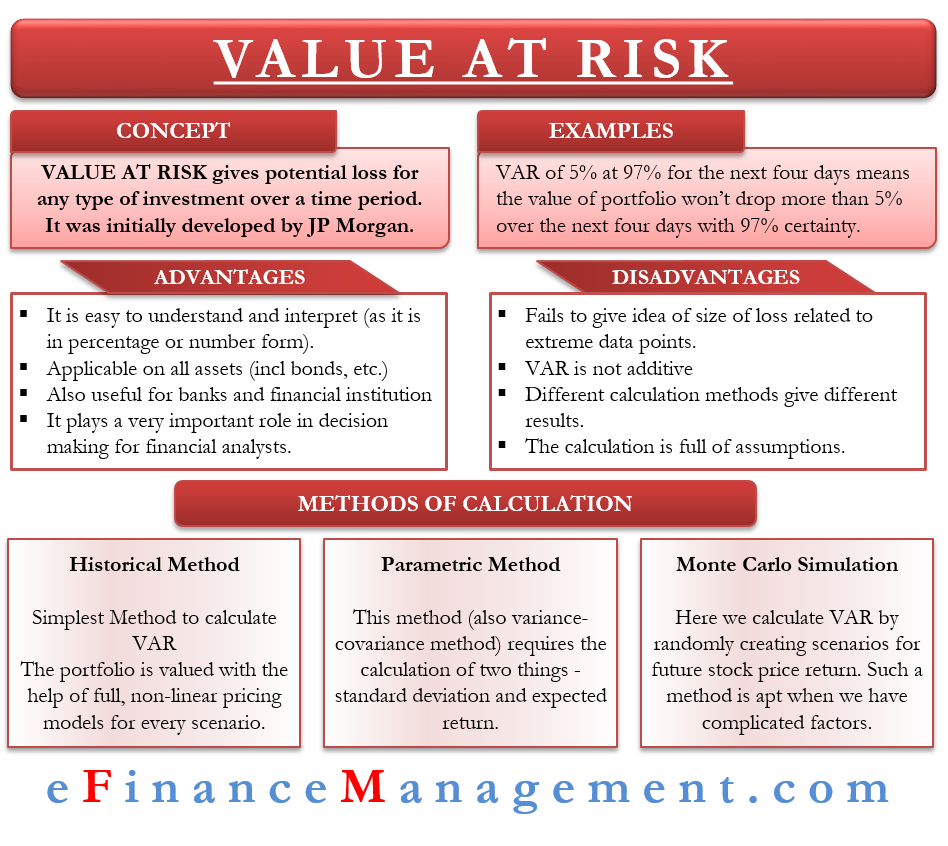 One can calculate VAR in three ways:

It is the simplest way to calculate VAR. In this, one uses market data of the last 250 days. With the data, one calculates the percentage change for each risk factor on each day. Then current market values are used to calculate the percentage change and get 250 scenarios for future value. Thereafter, the portfolio is valued with the help of full, non-linear pricing models for every scenario. Now, the third worst is chosen to be 99% VAR.

Basically, this method reorganizes the actual historical return, and arranges them from worst to best. Also, it assumes that from the risk perspective, history will repeat.

The normal distribution in returns is the assumption for this method. This method (also variance-covariance method) requires the calculation of two things – standard deviation and expected return. Both these things help to plot a normal distribution curve. Such a curve helps to easily know the location of the worst 5% and 1% on the curve.

This method is similar to the historical method, but under parametric method, we don’t use actual data, rather the familiar curve. Parametric method is perfect for scenarios where one can accurately estimate the distributions. On the other hand, it may fail to give clear results if the sample size is small.

Under this, we calculate VAR by randomly creating scenarios for future stock price return. Thereafter, for each scenario we calculate the change in the value, and then calculate VAR as per the worst losses. Such a method is apt when we have complicated factors. This method assumes the probability distribution for risk factors is known.

MVaR helps to know the change in risk due to any addition or substation of an investment in a portfolio. If an investment has a high VAR, but has a negative correlation with the portfolio, then its overall contribution to the portfolio risk may be much lower than its individual risk.

It is basically an extension of the VAR. CVaR or average value at risk or tail VaR allow a user to calculate the average of the losses beyond the VAR point. A general rule is – the smaller the CVaR, the better it is.

Overall, VAR is a good measure of risk. The only issue it suffers from is that it ignores tail-risks or the extremes data points. However, for general day-to-day activities, VAR is a useful and accurate measure.1–4

Last updated on : March 18th, 2020
What’s your view on this? Share it in comments below.
Pin It Tweet