What is Net Present Value (NPV) and Risk?

Net present value (NPV) and the risk have a strong relationship with each other. With an inappropriate assessment of risk, one cannot arrive at correct or near correct net present value.

One basic principle of finance establishes the base for building the concept of net present value. It is a very well known principle and is quoted everywhere.

A dollar today is worth more than a dollar one year later.

It is very simple to understand. For example, George earned $1 today. He instantly goes and invests his dollar in government security today say @ 4%. At the end of the year, he ends up increasing the future value of its dollar one year later by earning interest on that i.e., $1.04. Conversely, the present value of a dollar one year later is definitely less than one dollar. 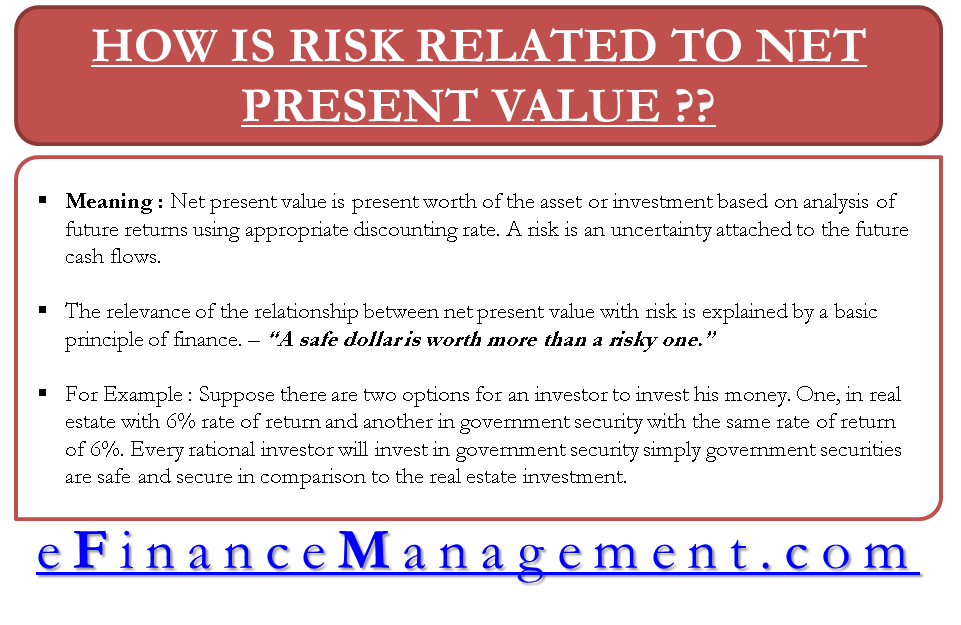 A Safe Dollar is Worth more than a Risky One.

Another fundamental principle of finance explains the relevance of the relationship between net present value with risk.

A safe dollar is worth more than a risky one.

How is Risk related to NPV?

In the calculation of NPV, typically, we utilize present cash outflow (or initial investment), future cash inflows, and a discounting rate. Risk has relevance with 2 out of 3 components of net present value.

Commonly, we know initial investment or cash outlay with certainty. But, future cash inflow is an estimation based on certain assumptions which may or may not turn right. Therefore, risk is associated with future cash flows.

Just talking about problems is not something which wise people should do. We have now learned that risk associated with cash flows can pose a severe problem to the whole NPV calculation. When an analyst calculates NPV for any project, he relies majorly on this technique. It is because he knows Why NPV is the best measure for investment appraisal? If a loss-making project gets approval for implementation, the outcome could be substantial financial losses. This makes it even more critical to address the issue with NPV calculation, especially the aspect of association of risk. Using a slightly tweaked technique of risk-adjusted NPV can significantly mitigate the risk of making the wrong decision.

Risk-adjusted NPV, also known as rNPV, does not use the estimates of future cash flows as it is in the calculation. They are first adjusted with the risk factor and then used for the calculation. For example, a first-year cash flow estimate is $1 m for a project, and estimation is with 70% certainty. In rNPV, an amount of $0.7 m ( $1 m * 70%) will be considered in place of $1 m. Although it amounts to the additional hassle of working, it may be worth it when dealing with big projects with heavy outcomes.

Such a technique is quite prevalent with pharmaceutical projects where the result of R&D is highly uncertain.1