A Sinking fund is like a special purpose saving account. The company deposits the money with an intention to repay a debt or replace an asset or acquisition in the future. The money in the fund is put regularly and one uses only for the predefined purpose. For example, if a company plans to replace an old asset some five years down the line, it will regularly deposit a set amount in the sinking fund to save the money for buying a new asset.

To ensure that the amount in the fund is used for the set purpose, sinking fund account is set as a custodial account. The company makes the payment to the trustees, who then use the fund for the set objective.

Payments to the sinking fund are usually a fixed amount. However, variable payments are legal in certain scenarios, like when a company has uneven earnings. In some cases, the company need not deposit any money in the fund for several years.

Sometimes, a company maintains one sinking fund for several debt obligations rather than creating separate for each debt. We also call such funds as aggregate or blanket sinking funds. The percentage of payment applied to each debt is predefined or is selected by the issuer. 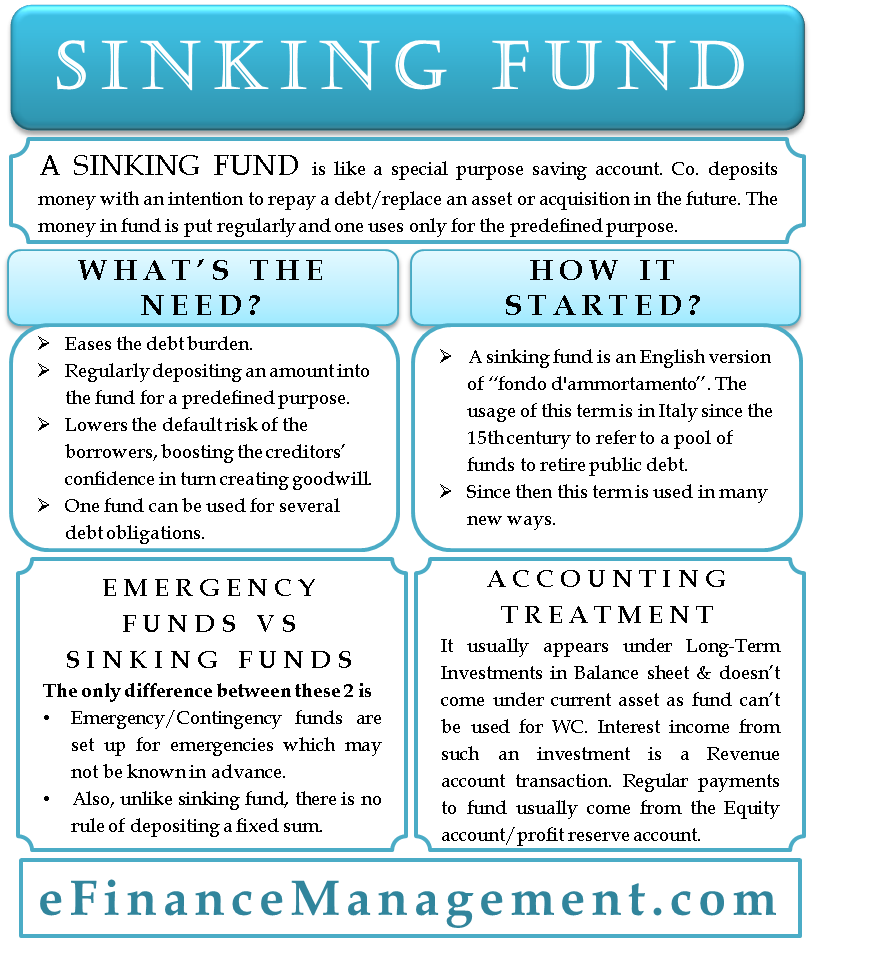 A sinking fund is usually used for the purpose of redeeming bonds. Companies, for instance, regularly deposit money in such a fund to buy back bonds before they mature. Such a buyback helps in boosting investor’s confidence.

For example, assume that a company named ABC issues $10 million bonds with a five-year maturity. So, to boost the investor’s confidence, the company needs to retire the bonds early, say $2 million bonds every two years for ten years. To ease the debt burden, ABC sets up a Sinking Fund account, where it deposits a set amount ($0.5 million) every half-yearly. By the end of every two years, ABC will have $2 million to pay for the bonds.

There is one disadvantage as well. The money in the sinking fund could not be used for other productive purposes, or for investment that could fetch the company a higher income.

How Did It Start?

Sometime in the 21st Century, companies and government organizations in the UK started using sinking fund replacing or acquiring new assets. But, in the US, it was primarily used to keeping funds aside for retiring bonds or stock share debentures.

How it’s Different from Emergency or Contingency Funds?

Both Emergency and Contingency Funds are similar in purpose as the sinking fund. However, unlike sinking funds, emergency or contingency funds cover many other emergencies or contingencies. These include situations that one cannot even think off before creating the fund.

Another difference is that the payment to the sinking fund is for a fixed amount. But, for the emergency or contingency funds, the regular payments are arbitrarily set figures.

Sinking fund usually appears under Long-Term Investments in the Balance sheet. It does not come under current asset even though they are normally cash accounts as the fund can’t be used for working capital. Businesses usually open a bank account for such funds or invest the fund amount in risk-free securities. The interest income from such an investment is a Revenue account transaction. Regular payments to the fund usually come from the Equity account or the profit reserve account. Firms may also transfer to the fund from other cash accounts, like Cash on Hand or Bank.

Last updated on : November 24th, 2018
What’s your view on this? Share it in comments below.