Inorganic growth is a business strategy that companies use for growth. The two common tools that companies use for inorganic growth are Amalgamation and Merger. You will often see people using the terms amalgamation and merger interchangeably. Both terms are commonly in use when it comes to takeovers in the business world. However, in terms of business and accounting, there are several differences between the two. To properly understand the two terms and their usage, it is important to know the difference between Amalgamation vs Merger.

Before we move to the differences, it is important to understand what amalgamation and merger mean.

Amalgamation of companies means combining two or more companies and creating a new entity from it. Amalgamation is a common strategy by companies for varying purposes such as:

Once the board members of the companies enter into an agreement, the plan is then sent for approval to the market regulators and court as well. These approvals from different authorities take their due time, and once done, results in a new entity. The new entity would then issue shares to the shareholders of the transferor company. Thereafter, all the assets and liabilities are taken care of.

The merger means the absorption of one company by another company, which is comparatively bigger in size. Just like amalgamation, mergers are also done for various purposes such as expanding the customer base, reaching out to new markets, reducing headwinds such as competition, and new product launch.

All the assets and the liabilities of the company that is merged belong to the company in which it is merged. Similarly, the shareholders of the old company get ownership and the shares of the new entity.

The merger has two forms – Merger through Absorption and Merger through Consolidation. Separately, there are several types of merger – Horizontal Merger, Vertical Merger, Co-generic merger, Reverse merger and Conglomerate merger.

Following are the key difference between Amalgamation vs Merger:

Two companies merge when they have a similar line of operations and usually want to expand in the new markets or acquire new customers. Amalgamation usually takes place when a bigger company acquires a smaller company, or a company acquires multiple companies.

There are mainly four types of merger – Horizontal, Vertical, Co-generic and Reverse. Amalgamation could either be by nature of purchase or in the nature of merger.

Who Takes the Initiative?

In the case of a merger, the initiative is generally from the acquirer, who wants the merger to happen. Amalgamation, on the other hand, gets the equal consent of both the entities. 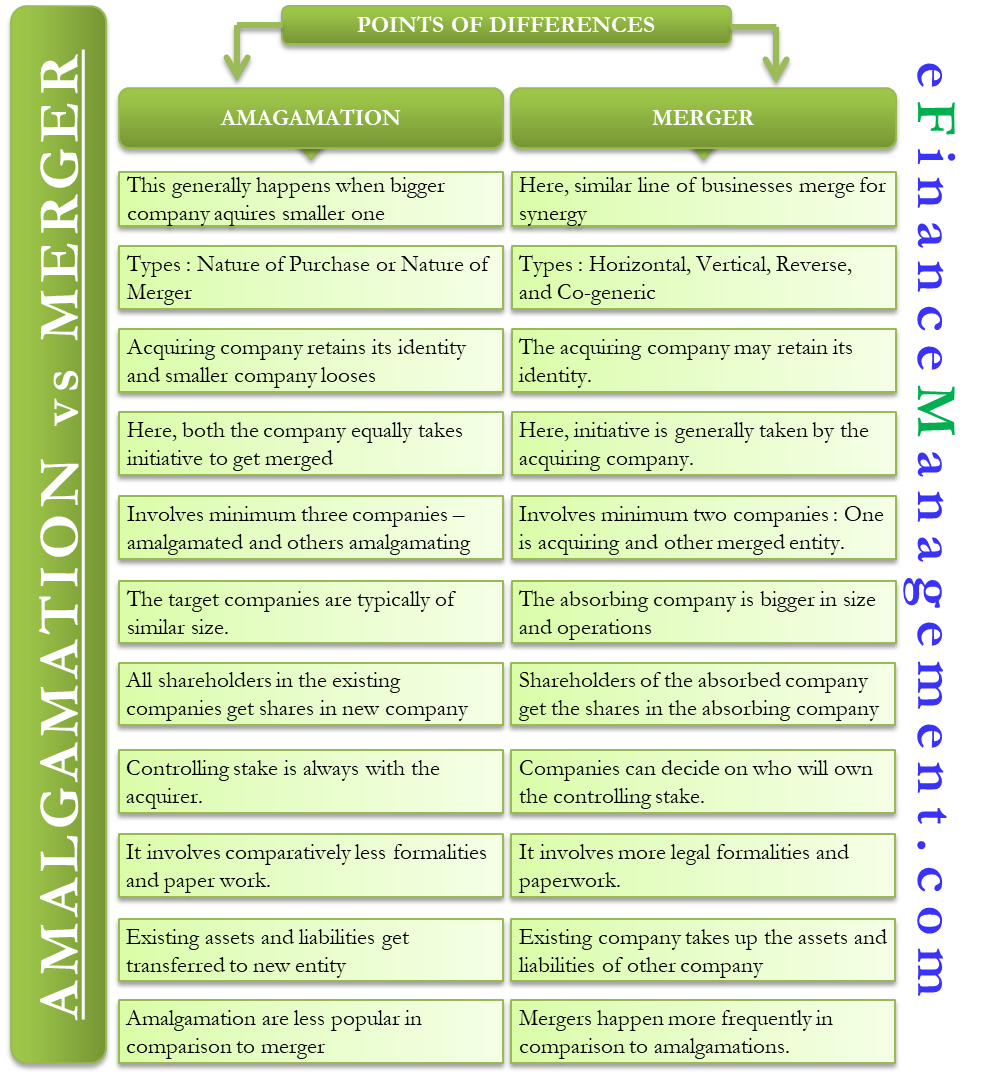 In a merger, usually the absorbing company is bigger in size and operations. Under amalgamation, the target companies are typically of similar size.

What Happens with Shareholders?

After a merger, shareholders of the absorbed company get the shares in the absorbing company. However, the number of shares they get may or may not be proportionate to their earlier shareholding pattern. In amalgamation, all shareholders in the existing companies get shares in the new company as well.

Transfer of Assets and Liabilities

In the business world, mergers happen more frequently in comparison to amalgamations. Some of the biggest mergers of 2019 are Occidental Petroleum and Anadarko Petroleum; AbbVie and Allergan; and Bristol-Myers Squibb and Celgene. Even though amalgamations are less frequent, the new company resulting from amalgamation is usually large and powerful. For example, the world’s biggest steel company, Arecelor was the result of amalgamation.

For corporate restructuring, both amalgamations and mergers are a useful tool. In fact, it won’t be wrong to say that amalgamation is a form of merger. Or, all amalgamations could be merger, but it does not necessarily mean that all mergers are amalgamations. The company can go for either of the two depending on the nature of their business, company structure, objective and macro business environment.1–4

Last updated on : December 26th, 2019
What’s your view on this? Share it in comments below.