A partial or full disposal of a business entity through exchange, closure, sale or bankruptcy is termed as divestiture. A divestiture occurs when a management of an entity decides to stop operating a unit as it is not contributing towards profit. Growth strategies often lead to the divestment of business units.

After understanding the meaning of divestitures, let’s have a look at the reasons which lead to the same.

The following are the reasons that lead to divestitures:

On gaining the understanding of the reasons leading to divestitures, let’s know about the types for the same.

The following are the types of divestitures: 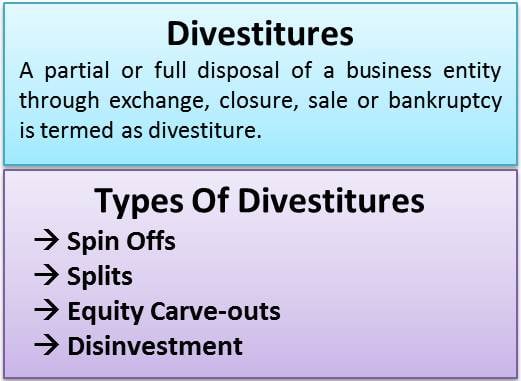 A company creates a subsidiary company. The shares of the new entity are distributed to the shareholders of the parent company on a pro-rata basis. However, the parent company also retains ownership in the spun-off entity. Spin-offs have two approaches that can be followed.

In the first approach, the company distributes all the shares of the new entity to its existing shareholders on a pro rate basis. This leads to the creation of two different companies holding the same proportions of equity as compared to the single company existing previously.

The second approach is the floatation of a new entity with its equity being held by the parent company. The parent company later sells the assets of the spun off company to another company.

Splits involve dividing the company into two or more parts. This is done with an aim to maximize profitability by removing stagnant units from the mainstream business. Splits can be of two types, Split-ups and Split-offs.

When a company splits itself into two or more entities, it is termed as split-ups. In such cases, the parent company loses its existence.

Split-offs is when the shareholders of a parent company surrender their shares in exchange for shares in a subsidiary company. This concept is mainly followed for family businesses when all members cross hold shares in all subsidiaries of the entity. Exchange and conversation of the shares are done to separate the different family streams.

After understanding the types of divestitures, we’ll have a look at an example to get a clearer view.

Divestment of non-profit generating segments holds numerous benefits for the company. The protocol followed for divestment depends on the prevailing market conditions at the time of the transaction. However, the management works on multiple strategies in order to maximize flexibility in divestitures.1–3

Last updated on : August 31st, 2019
What’s your view on this? Share it in comments below.
Pin It Tweet