Mergers and acquisitions (M&A) are very common in today’s technologically advanced world. There are various industries around the world that are getting integrated through these business combinations. However, not every M&A transaction is same. M&A transactions are different in various ways. It is important to understand the characteristics of such transactions as it affects a lot of important things in the process.

The characteristics of an M&A transaction is important as they will decide how the entire transaction is concluded, how will the valuation be performed and what all tax and regulatory rules will apply.

The characteristics of merger transactions are different depending on the classification of the transaction on the following basis:

There are two types of transactions based on the form of acquisition:

Any tax issues related to the transaction will be borne by the shareholders. They need to pay taxes on any gains. However, the company is not bound to pay any taxes.

Mostly stock purchases deal with purchasing the entire target company, and not a part of it. So, the acquiring company gains both the assets and the liabilities of the target company.

Generally, there is no need for shareholder’s approval, unless the percentage of assets is substantial.

Since the company receives the payment, it is liable to pay all capital gain taxes related to the transaction. The shareholder does not have any tax consequences directly.

Since an asset purchase is directed more towards buying a particular part of the company that interests the acquirer, and not the entire company, it may translate into the acquirer avoiding assuming any liabilities of the company. However, legally such transactions are not allowed where the asset is purchased and the liabilities are clearly avoided. 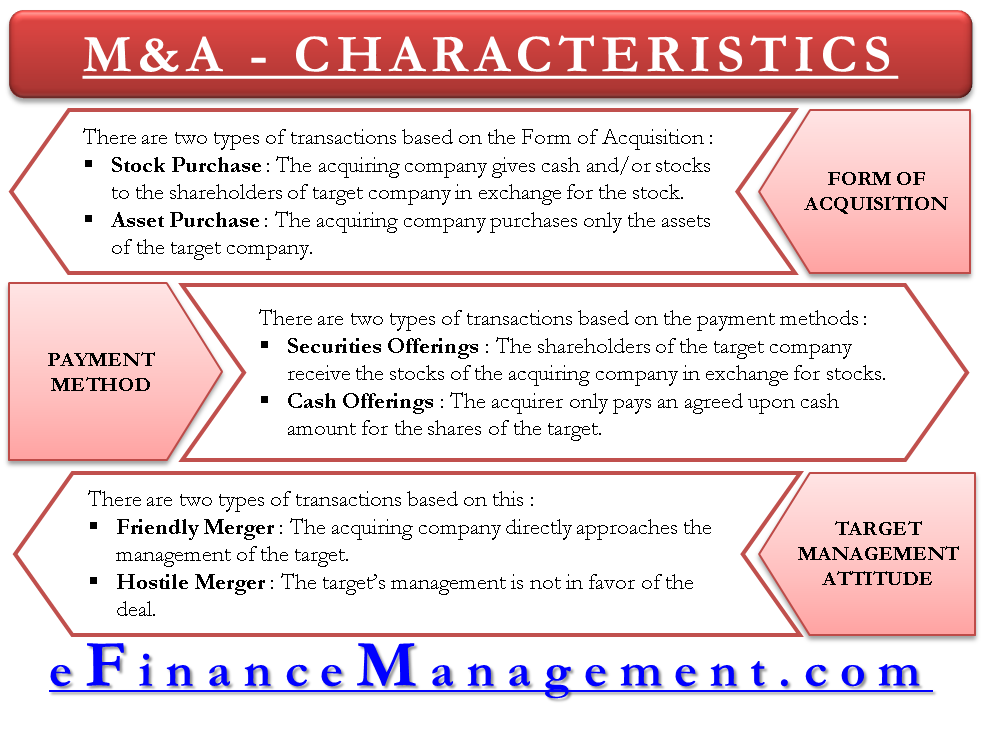 There are two types of transactions based on the payment methods:

Generally, the negotiations for the exchange ratios are done in advance so as not to be affected by the daily fluctuations that can happen in prices of the stocks. The total amount of compensation paid by the acquiring company depends on the exchange ratio, the value of the stock of the acquirer on the day of the deal and the number of outstanding shares of the target.

In this transaction, the acquirer only pays an agreed upon cash amount for the shares of the target.

There can also be a mixed offering, using a combination of both securities and cash.

There are two types of transactions based on the attitude of the target company’s management:

In this transaction, the acquiring company directly approaches the management of the target. If both the parties are in favor, the transaction terms, and the payment method are negotiated. Both the parties conduct due diligence on each other by going through financials and other data. Once the due diligence and negotiations are complete, a definitive merger agreement outlining the transaction terms and each party’s rights is drafted. The public announcements are made once the agreement is signed. The deal needs to be approved by the shareholders and the regulators. Post this, the money is paid and the deal is completed.

In this transaction, the target’s management is not in favor of the deal. The acquirer directly approaches the board of directors of the company, which is called a bear hug. If it does not work out, the acquirer then approaches the shareholders of the target using either a proxy battle or a tender offer.