A horizontal merger involves a merger between two or more businesses that offer similar products or services and work in the same industry. In this merger, one entity buys another entity which is its competitor in order to form a new combined entity. A horizontal merger is done with the intent to gain higher synergies and capture greater market share.

As per the economic definition of the horizontal merger on MBDA.Gov, “Horizontal merger is a business consolidation that occurs between firms who operate in the same space, often as competitors offering the same good or service.” There are many types of mergers.

Businesses opt for horizontal merger due to the growing competition. When two or more entities in the same line of business merge, they bring economies of scale by reducing the overall costs of the business. The horizontal merger enables the new entity to offer a wide range of products and services to their customers in the most efficient way. It gives an opportunity to diversify their business, enter new potential markets and cover a bigger market share. The business also gets access to more number of resources than it had prior to the merger. There are many other benefits of merger. 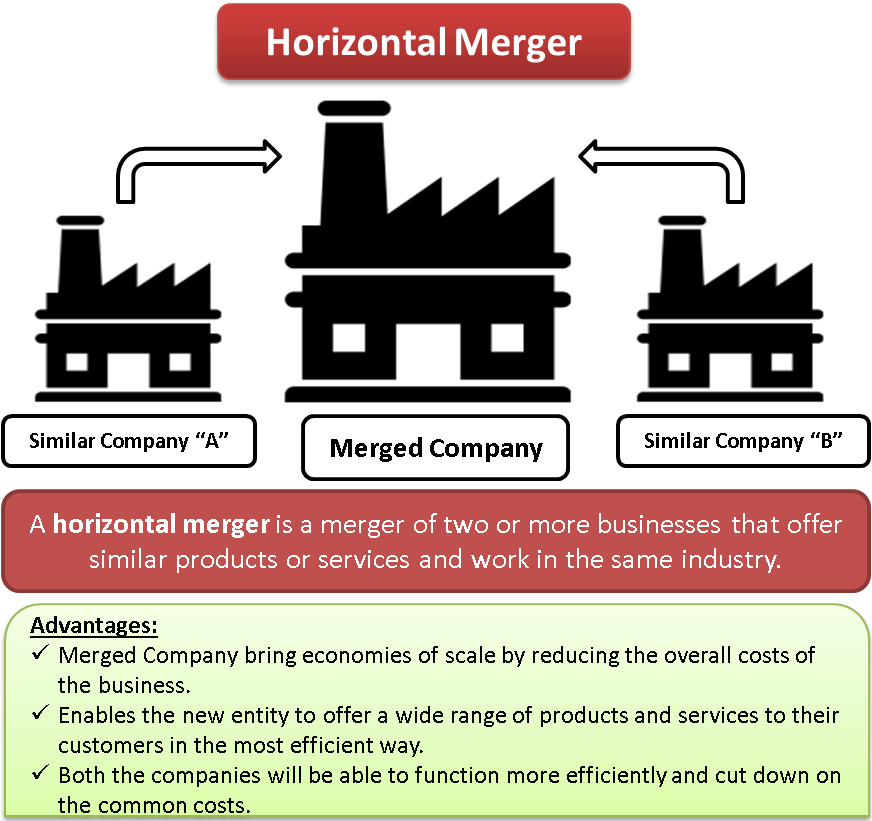 Joint venture is a business arrangement between two or more businesses to achieve a specific task. Once the task is accomplished, the joint venture ceases to exist. On the other hand, horizontal merger consists of a merger of two or more companies in the same industry, producing similar goods or services. Horizontal merger aims to reduce the competition in the marketplace by creating a monopoly for the business.

Businesses are facing tough times due to ever growing competition. Their synergy costs are increasing and margins are declining. To overcome this problem, the horizontal merger is the solution for the business. When two entities in the same industry that is producing similar goods or services merge together, it brings efficiency in operations and decline in costs.1–4