What is HR Due Diligence?

During a merger or an acquisition, the acquirer also takes on the human capital of the company. The process of understanding this human side of the target company is termed as human resource or HR due diligence.

Human resource (HR) is one of the most underrated assets of any company. The primary reason for this is that there is no straightforward method to calculate the value of the human resource of the company. One might say that the cost that the company is incurring to maintain the current workforce can be considered as its value. In actuality, that is far from the truth. The main phenomenon here is that people run a company, and they are the determining factor in how good or bad the company is or would be. The people of the company are actually its invaluable resource.

Importance of HR Due Diligence

While conducting a merger or an acquisition, the acquirer will consider all major factors such as target company’s finances, commercial presence, operational efficiency, etc. However, they fail to conduct a good HR due diligence. Let us take a case study to understand the importance of HR due diligence –

In 1998 Bank One acquired First Chicago NBD. The reason behind the acquisition was very clear – they wanted to survive in a rapidly consolidating industry. After the deal, the Columbus (acquirer) became the 8th largest bank in the United States and the most dominant bank in Mid-West. However, in the next three years, all the 16 top executives who were picked to run the company had left and the outcome was not as smooth as intended. This deal was registered as one of the biggest disasters in 1999, simply because the acquirer did not consider the delicate nitty-gritty of HR due diligence. Later on, the company rectified its mistake and gained momentum.

Areas of Investigation in HR Due Diligence

This area is basically understanding the demographics of the human capital of the target company.

Understanding the organizational structure of the target company is very important because restructuring is inevitable at some point after the M&A deal. The structure includes – 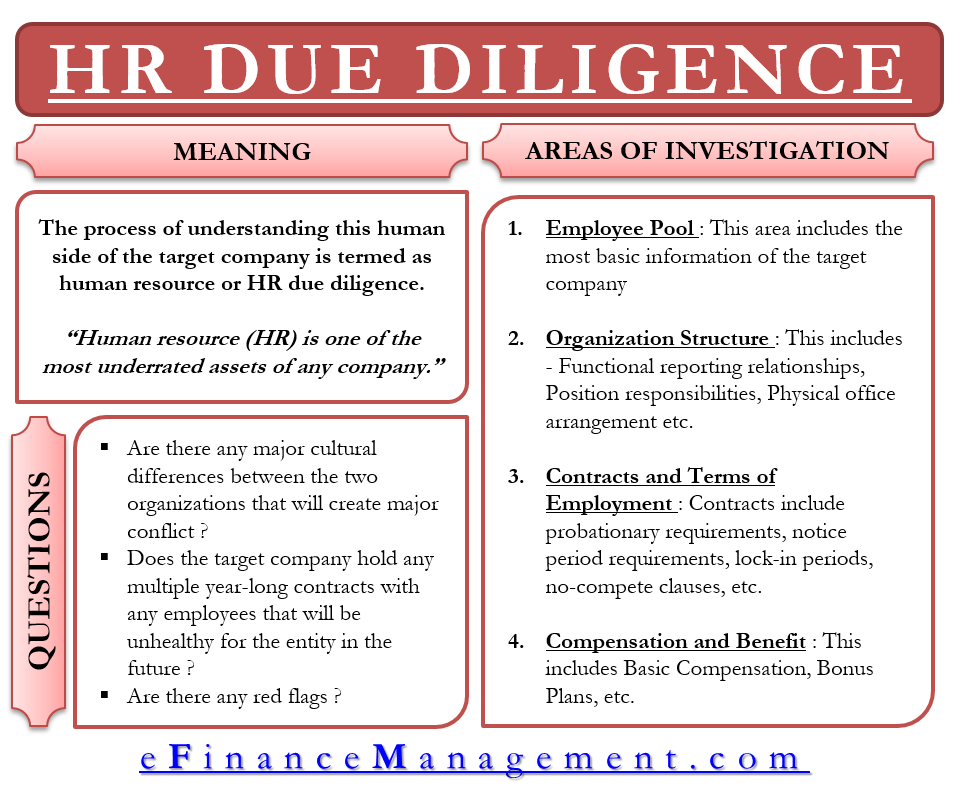 Most companies have contracts in place for their employees. It is important for the acquirer to study these contracts before making the buying decision. These contracts are agreements with employees and it includes decisions such as – probationary requirements, notice period requirements, lock-in periods, no-compete clauses, etc.

The terms of employment are the terms that the employees are obligated to fulfill. These terms are especially important if the target company is from the industry that has strong labor unions.

Apart from this basic tangible information, it is also important to understand the culture of the target organization and whether it would be a good fit with the acquirer. Without a good fit, there are chances of conflict among the employees of the two company, which can never result in anything good.

After investigating the human side of the target company, the acquirer has a rough idea of what he is dealing with, now the question is how all this information will be helpful in making the buying decision. Let’s understand this in detail.

How does HR Due Diligence help in Decision Making?

Once the HR due diligence is done, it is time to ask critical questions. Some such questions can be –

An in-depth HR due diligence can answer many such questions. The main goal is that the merger or acquisition is smooth and impacts the acquirer in a positive way.