It is a common knowledge that a majority of the public or privately held companies in the world are funded by capital provided through equity and debt. Equity includes common stock and preferred stock, whereas debt includes long term borrowing through bonds, debentures, commercial papers, etc. This whole equation of capital formation is termed the capital structure of the company. For example, a company that has capital of USD 200,000.00 out of which USD 150,000.00 is funded through common stock and USD 50,000.00 is funded through long term money market bonds, then the capital structure of the company is 75% equity & 25% debt.

In simple terms, recapitalization means changing the capital structure of a company, i.e. to change the ratio of equity and debt mix in the total capital. This is fundamentally done by exchanging one type of capital for another, or by introducing new capital. For example, a company may replace common stock in exchange for preferred stock.

There are mainly four types of recapitalization as follows:

In a leveraged recapitalization, a company replaces part of its equity with debt. So the deal may look like – XYZ Ltd. offers two units of debenture against one common stock. This will change the capital structure of the company, i.e. now the percentage of debt will increase whereas the percentage of equity will reduce. Companies resort to leverage recapitalization when their share price is declining. It is a method of controlling the fall in share price by reducing the number of outstanding shares in the market. Market views leveraged recapitalization in the negative light. Therefore, it is not good for the reputation of the company.

A leveraged buyout is a term used for the acquisition of a company or a part of another company financed with a substantial portion of borrowed funds. Acquiring company uses assets of the target company are mortgaged to borrow funds used to acquire the target company. Recapitalization is not the main motive, but an outcome of a leveraged buyout. In other words, the acquiring company does not necessarily have an intention to change the capital structure of the acquired company. However, due to such substantial borrowings, the debt obligation of the acquired company increases and the capital structure automatically changes, thus gives birth to recapitalization.

Equity recapitalization is one of the most common forms of recapitalization. In this, the company raises new funds by issuing a part of the authorized common stock. This new fund is used to buy back the debt instruments of the company. Reducing debt and increasing equity in the capital structure of the company is a positive sign. This is because the holder of the debt instrument has to be paid regular interests, and this, in turn, reduced the profitability of the company. Lower debt improves cash flows, and higher equity means less mandatory obligations and less liability.

Nationalization is usually done when a big conglomerate affecting a nation’s economy is facing bankruptcy. In this method, the government infuses capital in private companies by buying a substantial chunk of the company’s equity. The classic example of nationalization is the TARP program introduced by the government of the United States to float the country’s banks in the troubled time of depression of 2008. Again this method is not done with the purpose of changing the capital structure. Recapitalization is a result of nationalization.

This takes us to our next question, why recapitalize at all? Why change the capital structure of the company? The reasons can be many, some of which are as follows:

Most of the times when companies take debt, it becomes quite a burdensome liability. Debt obligation comes with stringent and regular repayment schedules that a company must adhere to. Failure to comply leads to lower credit rating. Maintaining debt is a balancing act, and if given a chance the companies want to get rid of the debt. Recapitalization is a straightforward method to achieve this.

As mentioned in the previous part of this article, sometimes companies recapitalize to stabilize its share prices. Especially when the price of its share is falling, the company reduces its number of outstanding equity shares in the market through recapitalization. 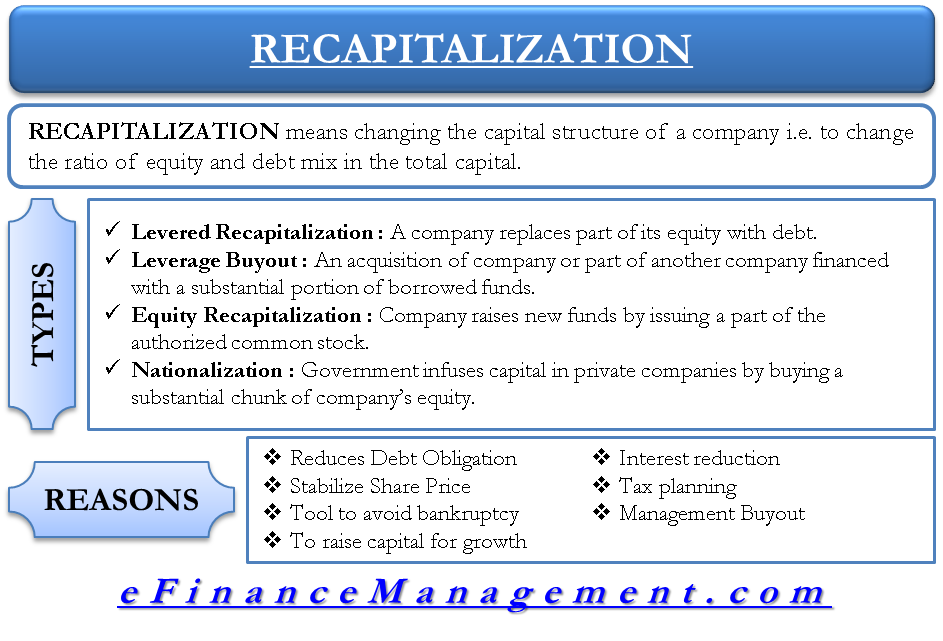 As a Tool to Avoid Bankruptcy

When are on the brink of bankruptcy, they take extreme measures to avoid it. These companies may consider merging with other companies, or may even ask for help from the government. In the process, they have to pledge their equity or raise additional debt. This inevitably results in the recapitalization.

To Raise Capital For Growth

Many times fast-growing companies can face capital constraints. Despite a healthy positive cash flow, they may not have money for functions such as increasing production capacity or hiring additional sales staff, etc. In such cases, a capital infusion is a great option. These companies might go to a venture capitalist or an angel investor to raise fund through equity or debt, and in turn, recapitalize the capital structure.

There are instances when some company has very old outstanding debt instrument in floating in the market, that pays a much higher interest rate than the current interest rate. In such a scenario the company may consider to replace its high-interest debt instrument, with a lower one or maybe even with equity. For example, many companies issue callable bonds that they can call back if the interest rates become unfavorable.

Also sometimes a company may want to introduce new debt to reduce their taxes. Though this can’t be the only reason to recapitalize, however, this is a pretty good side benefit of it.

Management buyouts (MBO) are one of the formidable reasons due to which recapitalizations occur. Financing required for an MBO is quite substantial, both debt & equity. This inevitably results in changes in the capital structure. For example, management of a company might try to pay for the company with ESOP, thereby may reduce equity capital.