The advantages and disadvantages of the internal rate of return are important to understand before applying this technique to specific projects. There must be a proper analysis conducted and an interpretation of most projects by this well-known evaluation technique and selection of investment projects. Internal rate of return has certain limitations in analyzing certain special kinds of projects, such as mutually exclusive projects, an unconventional set of cash flows, different project lives, etc.

The various advantages of the internal rate of return method of evaluating investment projects are as follows:

The first and the most important thing is that the internal rate of return considers the time value of money when evaluating a project. This is a massive downfall in the accounting rate of return, the average rate of return, and Pay Back period. One can measure IRR by calculating the interest rate at which the PV of future cash flows equals the capital investment required.

The most beautiful thing about this method is that it is very simple to interpret after calculating the IRR. If the IRR exceeds the cost of capital, then accept the project, but not otherwise. This is very easy to visualize for managers, which is why it’s preferable. Unless they come across occasional outstanding situations, like mutually exclusive projects, etc. 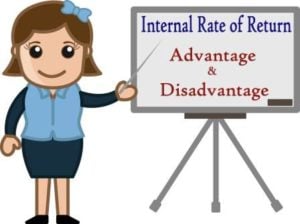 Hurdle Rate / Required Rate of Return Is Not Required

Required Rate of Return is a Rough Estimate

The method of internal rate of return does not prove very fruitful under some special types of conditions, which are discussed below:

One pitfall in using the IRR method is that it ignores the actual dollar value of benefits. One should always prefer a project value of $1,000,000 with an 18% rate of return over a project value of $10,000 with a 50% rate of return. There is no need for in-depth analysis; we can see that the dollar benefit of the former project is $180,000, whereas the latter project’s dollar benefit is only $5,000. There is no comparison as to which is more worthwhile. The IRR method will rank the latter project—with a much lower dollar benefit—first, simply because the IRR of 50% is higher than 18%.

Finance managers often come across a situation when the project under evaluation creates a compulsion to invest in other projects. For example, if you invest in a big transporting vehicle, you will also need to arrange a parking place it. Such projects are called dependent or contingent projects and must be considered by the manager. IRR may permit the buying of the vehicle, but if the total proposed benefits are wiped off by having to arrange the parking space, there’s no point in investing.

Sometimes investors come across mutually exclusive projects, which means that if one is acceptable, the other is not. Building a hotel or a commercial complex on a particular plot of land is an example of a mutually exclusive project. In such situations, knowing whether they are worth investing in is not enough. The challenge is to know which investment is the best. The IRR method will give a percentage interpretation value, but that is insufficient. This is connected to the first disadvantage of economies of scale, which the IRR ignores.

Consider two projects with different project durations. One ends after 2 years and the other ends after 5 years. The first project has an additional point of reinvesting the money, which is unlocked at the end of the 2nd year for another 3 years until the other project ends. This point is not considered by the IRR method.

When a project has some negative cash flow between other positive cash flows, the equation of the IRR method is satisfied with more than one rate of return, i.e., it reaches the trap of Multiple IRR. In the case of multiple IRR situations, it’s possible to decide with IRR, but we should know what is NPV at one cost of capital at least.

For example, if the IRR for a project is 10% and 30%, and @ 5% NPV is positive. Then Project will be accepted if the cost of capital is less than 10% or more than 30%. If the cost of capital falls between 10% and 30%, a project will not be accepted. If the NPV is negative @ 5%, the decision-making would be reversed. So, in such a case, the decision becomes dependent on NPV, which becomes more complicated. It is very rare that such a situation arises and is mainly found in agency deposits or other similar businesses.

Calculation of IRR is not Possible

If later cash inflows are not sufficient to cover the initial investment, in that case, IRR cannot be found. IRR is then a discounted rate at which the Present Value of Cash Inflow equals the Investment or Present value of cash outflow.

Importantly, when there is a conflict in the ranking of mutually exclusive projects between net present value (NPV) and IRR. At that time, NPV criteria supersede IRR criteria because NPV criteria precisely measure the amount by which the value of the firm will increase. The objective of Financial Management in terms of wealth maximization is met to the extent NPV can measure it. IRR will only be able to decide whether a project is worth accepting or not. But what increase in wealth will occur cannot be measured by IRR.

Difference between IRR and Rate of Return

There is a minor difference between the two, and hence, several times, both are used interchangeably. However, for long-term investment decisions, it makes a big impact.

Rate of Return (ROR) is the return earned by the company or the investor from that particular investment over the period of calculation. The calculation is simple, wherein total returns from that stock or security or investment earned over the given time frame are divided by the quantum of investment. And then it is expressed in terms of percentage.

Thus, the formula is Return on Investment = Total Returns*100 / Quantum of Investments.

On the face of it, IRR also is similar. However, the moot difference is that IRR reduces and expresses this return as an annualized percentage. ROR may be for a single year or multiple years and could be pretty long-term. Hence, ROR does not give the annualized return on investment, which is of more importance for making investment decisions.

If the return is calculated for one year or less than a year. Then the ROR and IRR will be the same. It will have no difference. However, the moment you extend the return period to multiple years, both the values will be different. Secondly, the longer the period, the wider will be the gap between the two types of returns shown.