What is Variance Analysis Report?

Let’s understand it with a small story for layman understanding. Tim and George used to run a manufacturing unit, XYZ Inc. For the year 2019-20, they estimated to achieve $1 M and a 0.8 M amount of revenue and expenses respectively to earn a profit of 0.2 M (1-0.8). At the end of the year, Tim prepared a report that stated actual revenues & expenses of 0.91 M and 0.79 M respectively. Thus, the overall profit achieved is 0.12 M in place of planned 0.2 M. Since, overall things were not in their favor, it calls for a detailed analysis of what went wrong and how to correct them for the next year. Such a report which is equivalent to performance appraisal of the overall business along with explanation and advice on the future course of action is a “Variance Analysis Report“. 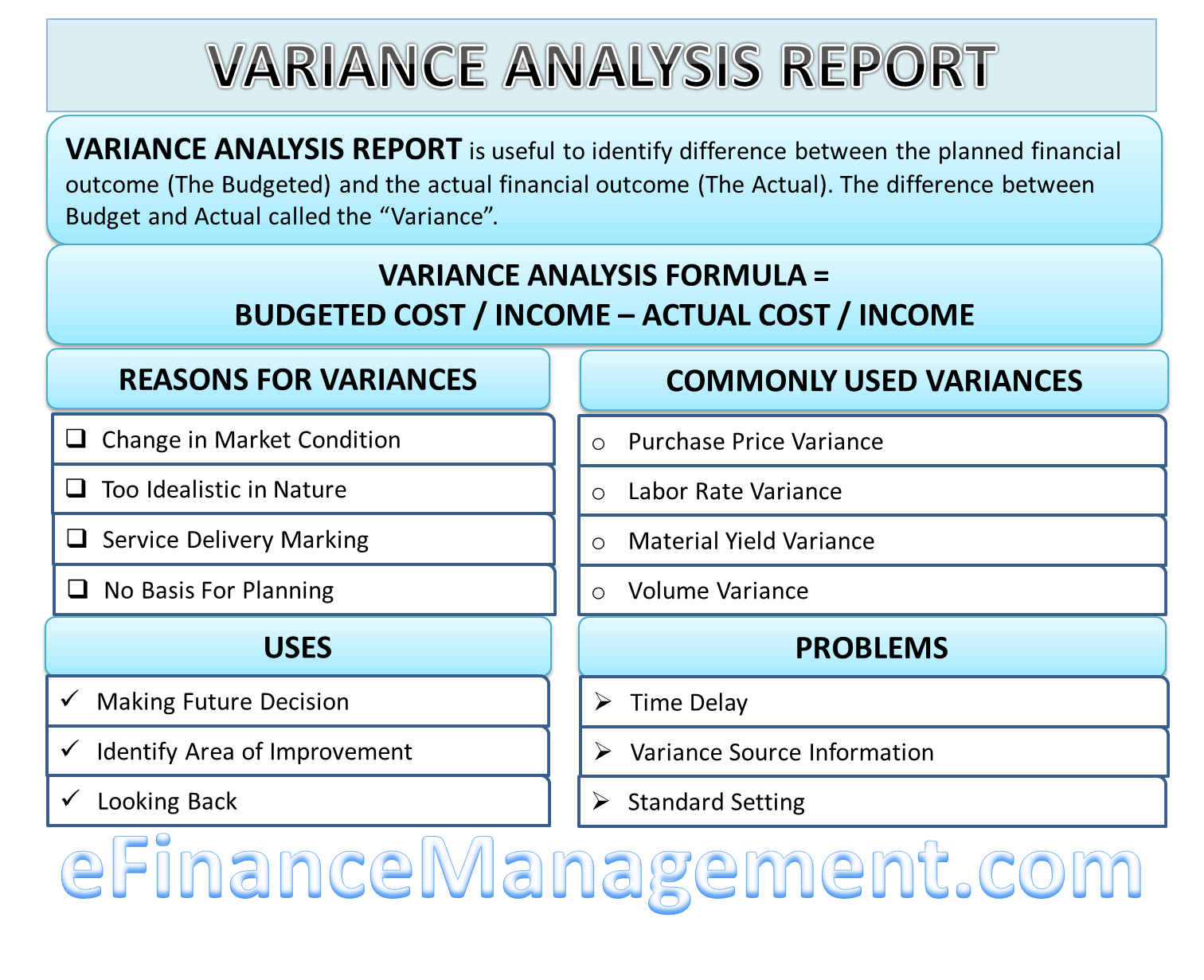 A formula for variance analysis is as under:

How to Prepare a Variance Analysis Report?

Although, there is no fixed rule for preparing a variance analysis report. The following could be one of the logical sequence of preparing such a report. We continue the same example of the manufacturing unit, XYZ Inc.

Steps by Step Method to Prepare

Prepare a table like the following preferably using a spreadsheet/excel. The table mentioned in the following image mentions the detailed information about the revenue, expenses and the resultant profits. It is appropriate if the product information like quantity and price are also mentioned. On the other side, it contains the costing information like variable and fixed costs. These pieces of information can easily be gathered from the accounting system of the organization. 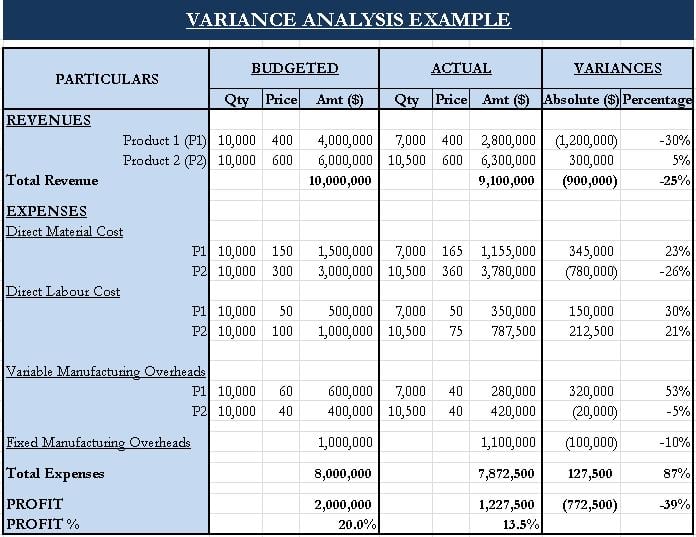 Step 2: Notes or Explanation to Variances

Notes or explanation to each of the variances that occurred in the business during the period. We have assumed a period of 1 Financial Year here but the CFOs can also prepare it bi-yearly, quarterly, or even monthly depending on the usefulness of the report.

Calculating variances is not very critical, but understanding, analyzing, interpreting this information is much more critical for making the whole exercise fruitful. These notes can be further sub-divided into various types of variances, such as following:

We will not evaluate each one of these here. Let’s take Revenue Variances for an example

We can clearly see there is an overall adverse variance of 0.09 Millon i.e. -25%. That is said, but that’s not enough. Now, we need to look at why there is an adverse variance. We have 2 products i.e. P1 and P2. In the product level details, P1 has a significant negative variance of -30% whereas P2 has a favorable variance of 5%. The first level conclusion that comes to mind is that P1 and its whole team should be blamed. We can still go further and check why P1 had such a variance. Is it due to the lower quantity of sales or lower prices fetched from the market? Looking at the table, we can see that the prices were not compromised but the overall volumes could not be achieved.

On discussing with marketing teams, they can further dig down reasons for such a fall in volumes and any of the following reasons could come out.

To:   Board of Directors

The variance analysis report also contains an explanation for each variance.

Purchase expenses are increased due to lower supply of raw material used in production.

You can view a sample of variance analysis pdf report in below reference links.

Purchase price variance results when actual price which is paid for materials is more/less than the budgeted cost for such materials.

Labor rate variance results when the actual price which is paid as wages is more/less than the budgeted cost for wages. For instance, labor is paid at $ 10 per hour, but are paid at $ 12 in actual.

This shows the actual quantity of material used and the standard quantity expected to be used in the course of production, multiplied by the standard cost of such materials.

Volume variance means actual quantities sold or consumed and budgeted quantity expected to be consumed or sold, multiplied by the standard price per unit.

Use of Variance Analysis Report

Variance analysis report helps the management to identify the area in which a company can improve. So, management can Find ways to decrease cost or increasing sales & ultimately helping a company in increasing the profitability of the business.

Managers use variance analysis to measure and analyze what has already occurred in the company’s activity. Understanding what has hindered or helped the company in its actual performance. It helps management decide what policies and procedures should be modified and how.

Due to the periodical preparation of variance analysis report, it is not of much use in a fast-paced environment compared to other tools. Therefore the management has to rely on other measurements that are generated on the spot.

Generally, reasons for variance are not recorded in financial records. Thus the management has to identify reason from different sources such as bills of material, overtime records to determine the cause of the problems. Hence the source of information is important.

Variance analysis is essentially a comparison of actual results to an arbitrary standard that may have been derived from political bargaining. Consequently, the resulting variance may not yield any useful information.1–4