Sales volume variance (or Sales quantity variance) is nothing but the dollar variance in total sales as a result of ‘over or underachievement of sales numbers’. The mathematical representation of the same is as follows:

It is the difference between the target selling units as per budget and units actually sold. The resultant figure is then multiplied by the standard selling price of the product. It is also referred to as sales quantity variance.

As the name indicates, sales volume variance is analyzed based on the volume. i.e. the number of units sold. It is the difference between the target units (defined in the budget) to sell and the units actually sold. To arrive at the value of variance due to variance in selling quantity, the standard selling price is multiplied by the difference between expected and actual units.

You can check the list of all the formulas for standard costing here.

The management sets the standard price. The actual number of units sold is provided by the accountant of the organization.

Scenario 1) Calculate the sales volume variance if the actual number of units sold is 380,000.

Scenario 2) Calculate the sales volume variance if the actual number of units sold is 430,000. 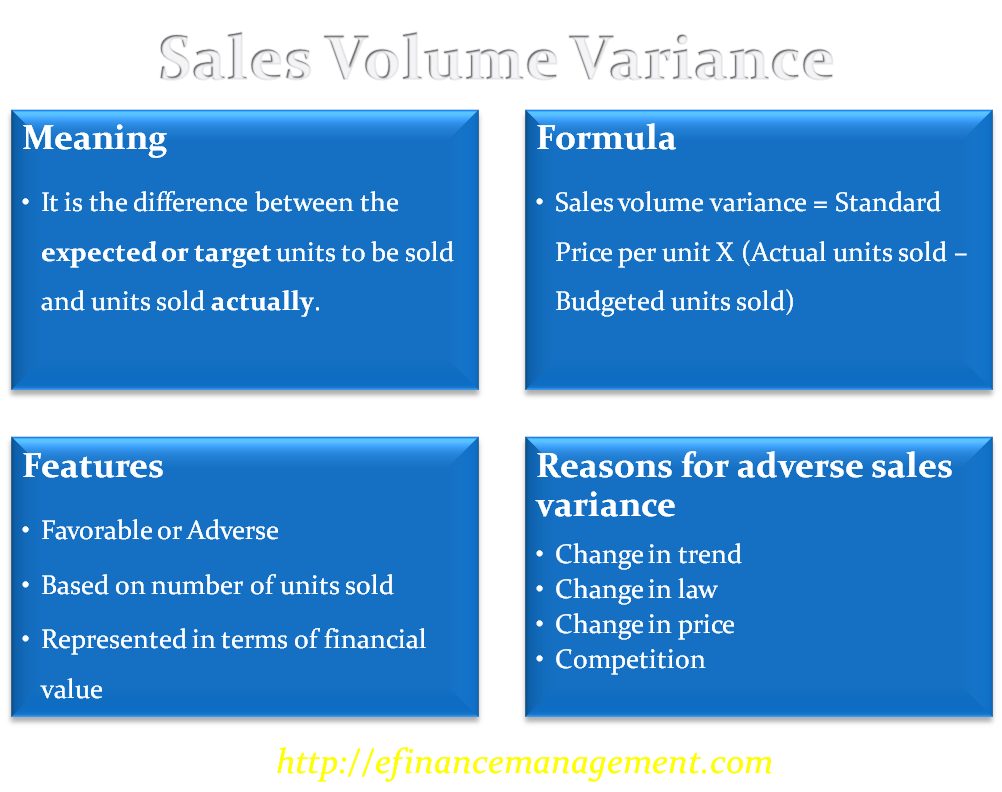 How Does it Help in Decision Making?

Accordingly, unfavorable sales volume variance helps in introspecting the factors which led to the low sales volume. Although, the analysis may vary from industry to industry. As an illustration, a number of units of air conditioner sold in summer shall obviously be higher than the other two seasons. Hence, while setting up the standards, one has to consider these facts in mind.

Due to advancement in technology, there are changes in taste and preference of the customer in the market. As an illustration, if the company introduces a new and advanced version of the mobile device, it affects the sale of the previous version adversely. Accordingly, because of the change in customer preferences, customer shifts to a new and improved product. This is cannibalization of product.

Sometimes, change of law also may affect highly in a drop in the sales volume. For example, the foreign trade policy has changed and the government has restricted to export certain products. It affects the export sales volume adversely. Accordingly, the variance will be adverse.

It may so happen that the competitor launches a new product in the market. It affects the target volume adversely. Accordingly, it results in adverse variance.1–4