What is Rolling Budget?

Rolling budget is the extension of existing budget. Hence, it requires more efforts to update and implement compared to static budget. It requires time and efforts in preparation.

Rolling budget is also known as a continuous budget.

As the name suggests, rolling budget follows the “incremental” approach. The budget for an incremental period is added to the previous budget. This is a “short-term approach”. It helps in micro-planning and management. The rolling budget for the new period is prepared not only based on the previous assumptions. However, the fundamental changes in the assumptions are to be considered.

The organization shall segregate the financial drivers in the below areas;

Fixed expenses are easy to forecast. It has most compelling evidence. As an illustration, office or factory rent is easy to predict. There is a remote possibility that it will change. 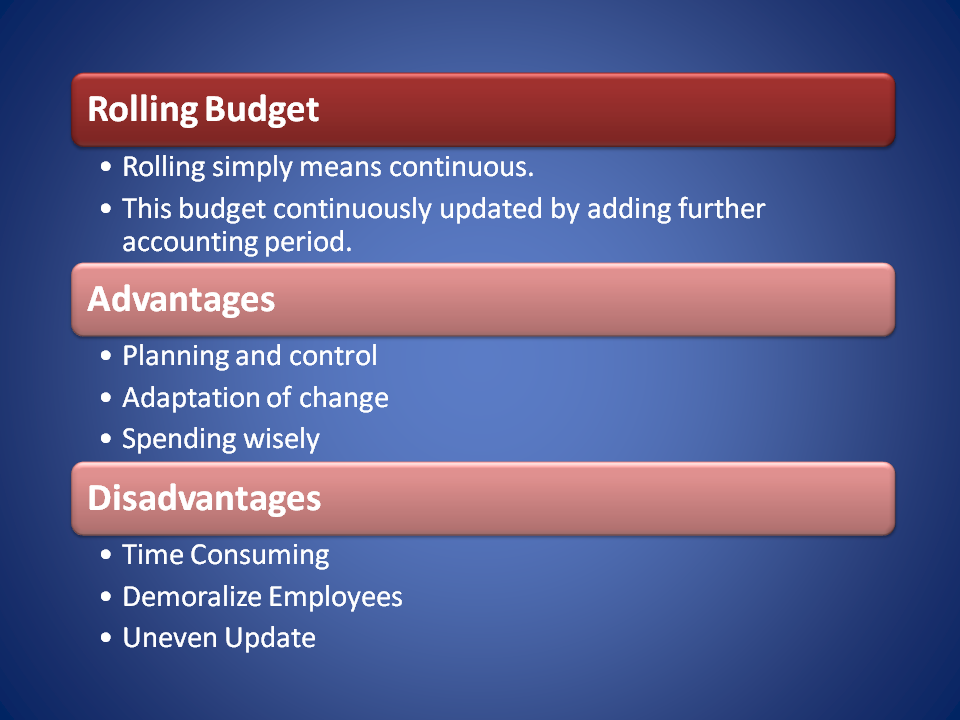 X Ltd has prepared a budget for 2017 from January to December (12 Months).

Once the January 2017 month passes, the original budget extends up to January 2018. Hence, now the budget is again 12 months. Let us call it as RB1.

Likewise, once the February 2017 passes, the RB1 extends up to February 2018. Accordingly, the budgeted period shall remain 12 months only.

The cycle keeps on moving. Hence, it is a continuing process.

The differentiation helps in understanding the concept better.

The preparation of a traditional budget for the next year begins in the fourth quarter of the year while rolling budget is a continuing process.

Another key point of difference is Traditional budget cannot be changed upon approval. However, if there is a change in underlying assumptions, improvement can be made in rolling budget.

Based on proper and in-depth planning, the forecast is prepared.

Rolling budget helps in planning and controlling more accurately. Therefore, It helps in reducing the uncertainty of budgeting. Rolling budget plans for near-term future instead of long-term. It helps the management to know where the company is moving in terms of sales and profitability.

12 months period budget can be considered as a long term. This is because of technological advancement. The technology changes at a rapid rate. It may lead the organization to change with the latest technology. The budget also needs to be updated based on assumptions.

The managers tend to spend more money even when the expenditure is not really required. In contrast, a lower level executive may need to spend money on identified opportunities. It helps as a guiding tool to spend the money with wisdom.

Rolling budget requires more efforts, time and money. Employees spend a large number of hours to prepare the budget. A budget is a tool which helps in decision making. Without a doubt, it cannot run the business.

It is a best practice that the team of few people is involved in preparation and updating of rolling budget.

An employee may feel that the budgetary targets are changing constantly. Spending much time on preparation of budget may lead to demoralizing the employees.

Undoubtedly, all the fundamental assumptions shall be considered while preparing the budget. Accordingly, It helps in archiving the objective with less time.

Indeed, The organization shall always try to align the incremental budget with the previous period budget.1–4